Even before touching down at the Henri Coandă airport in Otopeni, the schedule for the fourth Football In Heaven tour seemed like it was going to make for an extra special trip. The idea was to bookend the usual lower league stuff at ridiculously scenic grounds with Romania’s two Euro 2020 qualifiers against Spain and Malta. As luck would have it the two international matches were being held in two different cities, Bucharest and Ploieşti respectively so was tailor made for out planned base in and around the beautiful city of Braşov.

I had already said to organiser and good friend, Emmanuel Roşu, that we would need a bigger bus than our previous trips to Bucovina and Sibiu and boy was I right. Discounting a couple of last minute call-offs 53 people from a staggering ten European nations (Romania, England, Scotland, Wales, Norway, France, Germany, Czechia, Spain and Denmark) had booked to come on the trip. Unless anyone knows different we believe this to be a record number of people attending an organised groundhopping weekend outside of the UK!

With the kick off for the Spain game at the Arena Națională set for 21.45pm on the Thursday evening it gave everyone ample time to settle into their hotel before meeting the bus. Emi had managed to arrange with the Romanian FA that we would be allowed to park out bus inside the stadium which was perfect as traffic around the Arena was totally gridlocked. The Romanian FA also provided tickets and pitch side passes, for the more serious photographers among us, to both internationals completely free of charge to 53 strangers. In all my years of travelling scarcely have I come across a more generous and hospitable nation.

The Arena was packed for the visit of three time European champions Spain, although there was only a very small turn out of Spanish fans. Of course the world famous Valencia and Spain fan, Manolo “El Bombo”, was in the house and his famous bass drum manfully battled all night to be heard amid the noisy locals. Every great story needs a pantomime villain and the Spanish captain, Sergio Ramos, fulfils that role better than most. Jeered with every touch of the ball, even before he dispatched a very softly awarded penalty, you have to grudgingly admire what a master of his side of the game he really is. Romania were caught napping at the start of second half and were made to pay when Borussia Dortmund’s Paco Alcácer made it 2-0 from close range.

Much to the delight of the vast majority of the crowd of 50,024, Romania staged a storming comeback and pulled one back through on loan Galatasaray striker Florin Andone. They threw the kitchen sink at an impressively steadfast Spanish rearguard and were also denied a seemingly certain penalty towards the end. It was tough on the hosts who probably deserved a point against a star studded Spain side. 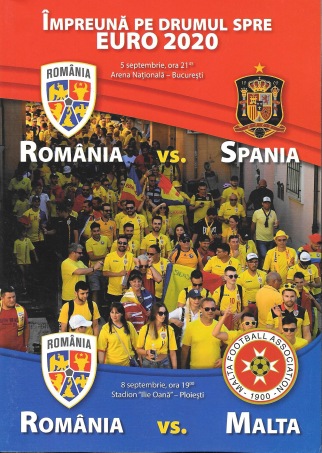 Our route to our base in beautiful Braşov afforded the time for several  sightseeing stops but still left us in good time to make the 5pm kick off at the sixth level match between ACS Caraimanul Buşteni and ACS Viitorul Aricești. Five Lei (£1) secured entry and, much to the delight of us groundhoppers, a programme! As it transpired this was not just for our benefit but for means of introducing the Caraimanul side to the locals as this was their first home game in eight years having not been able to muster a team in that time. The ground was a delight, sun bathed mountains to one end and densely wooded slopes to the other. The stand was a rusty, creaking, partially derelict leviathan. Over 200 locals had gathered for the homecoming but sadly the visitors from Aricești had not followed the script and were the better side in a comfortable 2-0 win. 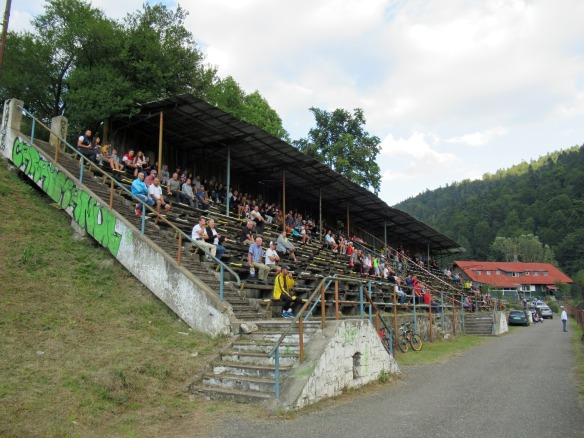 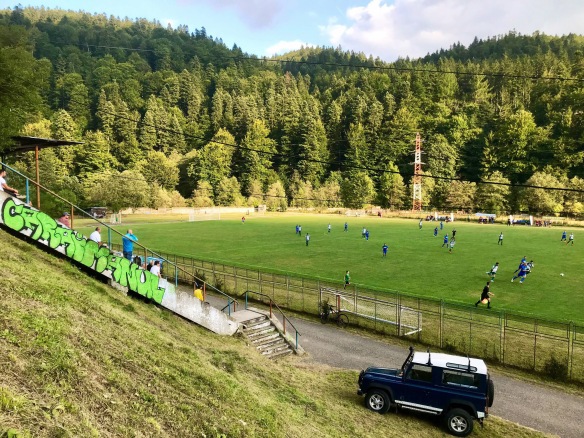 Saturday arrived and it was a beautiful morning in Braşov, with the early morning sun relentlessly beating down on us. We had two games on the agenda for today, the first of which was in Braşov itself at the main Stadionul Silviu Ploeșteanu. It was previously known as Stadionul Tineretului but was rededicated in memory of the legendary coach of Steagul Roșu Braşov who had turned them into a powerhouse of Romanian football during a twenty year spell as coach. SR Braşov would eventually morph into FC Braşov but they suffered a calamitous bankruptcy in 2017, almost immediately being reformed by their supporters as AS SR Braşov.

It’s not the traditional Braşovia club we are watching this morning but a new rival club, Corona Braşov. Viewed by SR fans as a cuckoo in their nest, Corona seem to be attracting little in the way of support from the locals. However, today Corona are very good, rattling in four unanswered goals against a sorry looking Ciucas Tarlungeni. 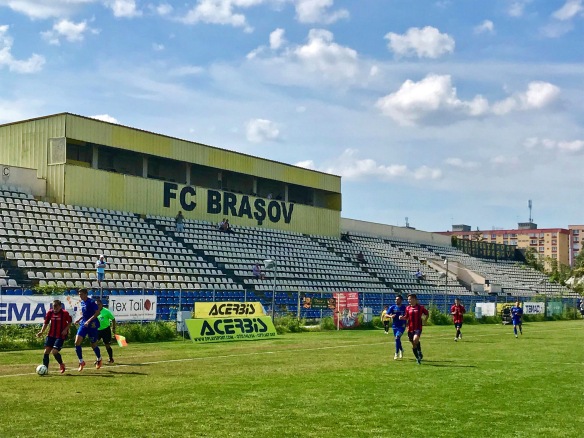 During the many discussions between Emi and I for sorting out the itinerary for this Groundhop weekend he had asked if I thought the guys would like a ground with a 14th century citadel in the background. I had smiled to myself, knowing already to which ground he was referring to, and answered “Oh go on then”. We arrived at in Rupea in time for a tour of the Cetatea Rupea, which dates from a mindblowing 1324. From the fortress crenellations we spy the ground of AS Prietenii Rupea un the valley below: Similarly to the earlier game at Corona, this was a fourth level Braşov County match with the opposition being Inter Cristian. Prietenii’s club president made himself very busy providing beers and soft drinks to a thirsty bunch of travellers for which he flatly refused to take any money for.

The ground is a cracker, a long bleacher style stand is on the dressing room
side of the venue but the best view is from the grass bank on the opposite side. The elevated bank gives you panoramic view of the action but also of the fortress in the background, it really is a most stunning vista. The visitors are the better side and scored three times in the last 20 minutes to secure a 3-0 triumph.

Sunday promised to be a cracking day with the second of the two Euro 2020 qualifiers taking place at 7pm at the Stadionul Ilie Oană in Ploieşti. We found an enticing looking fixture back in neighbouring Prahova county which fitted nicely in with the Romania game.

We left our various hotels and set off for the town of Comarnic which was en route to Ploieşti. Unfortunately we hit very heavy traffic around Buşteni and ended up arriving at the ground after the scheduled 2pm kick off. We needn’t have worried however as kick off was delayed for our arrival but what happened next was totally surreal. We were ushered onto the pitch and saw a large number of people in the stand opposite. They displayed a banner in English that stated “This Is Heaven!” as a reference to the name of our tour. They then applauded us and set off a huge amount of blue and white smoke bombs. It was a truly humbling moment and we heartily returned the applause.

Olimpia Comarnic were only formed in 2018 after the town lost the predecessor club Vulturul Comarnic but they have assembled a formidable team who sweep aside CS Șirna Varnița by six goals to nil. Bearing in mind this is effectively a district level game, the attendance of 720 is just astounding and the fervour of the locals in backing their players was an absolute privilege to witness.

Aside from the incredible fans the ground is a cracker too, being surrounded by derelict factories and with super long freight trains rumbling by, there is almost too much to take in. After the match everyone gathers at the top end of the ground for a barbecue. Anyone speaking English was provided with delicious mici (spiced ground mixed beef rolls) and something to drink free of charge. Fortunately Olimpia’s ultras, the “Mountain Boys”, have set up their own charity to support a sick local child, so we happily contributed to this in lieu of their most generous hospitality and welcome. This amazing hobby sometimes affords you the most incredibly satisfying and life affirming experiences, and Olimpia Comarnic is right up there with the best of them. 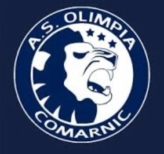 The final match on Football In Heaven 4 was Romania’s Euro 2020 qualifier with Malta. Being staged at the excellent Stadionul Ilie Oană in Ploieşti, it fitted in perfectly with our return journey to Bucharest. It’s a modern compact stadium with a capacity of 15,000 and was opened in 2011. It was built on the site of FC Petrolul’s old stadium, originally opened in 1937, and also named after Ilie Oană, a former Șoimii Sibiu and Petrolul player who went onto manage Romania.

The game is by no means a classic with Malta sticking ten men behind the ball and playing for a draw from the off. Romania eventually manage to puncture the resolute Maltese defence just once, with the deciding goal being a bullet header from Reading’s George Pușcaș at the start of the second half. 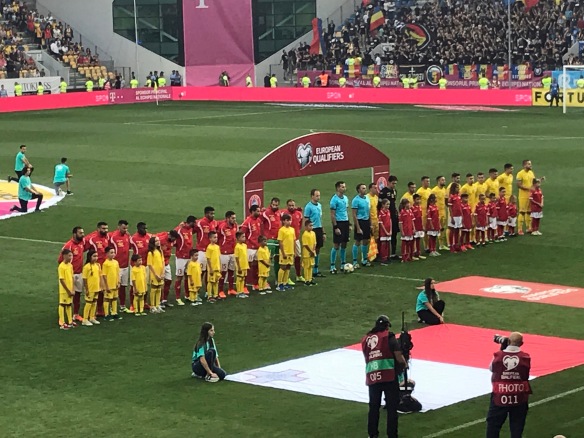 It seemed to be a unanimous verdict that this had been a quite extraordinary adventure in a truly amazing country. Organiser Emi is hoping to run a fifth edition of the tour, so if you fancy seeing a little bit of heaven please follow him on Twitter (@Emishor) or join the Football In Heaven Facebook group. 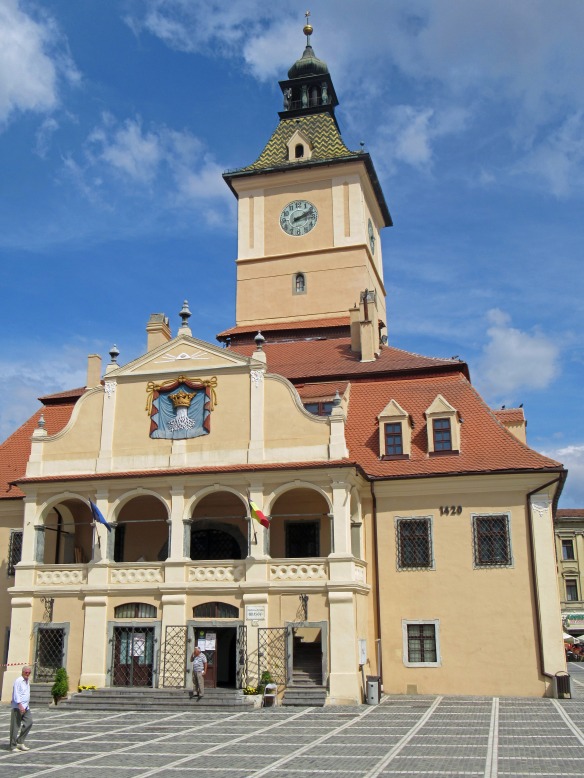 A much expanded version of this article appeared in edition No.52 of Football Weekends magazine (February 2020) #FIH4