Opened in 1913 the elegantly dilapidated Stadio Pier Luigi Penzo (named after a famous war time pilot and who is remembered with a statue in the nearby public gardens) is regarded as the second oldest in Italy behind the Luigi Ferraris in Genoa which had opened two years previously but was completely, and gloriously, rebuilt by Vittorio Gregotti for the 1990 World Cup. However, Milan’s neoclassical Arena Civica would argue that it is the oldest football stadium, not only in Italy but the entire world. The Arena Civica was opened in August 1807 and was used by Internazionale for their biggest matches in their early days and staged all their home games between 1930 and 1947 when they moved into the San Siro. Today this ancient sporting venue is still used for football by Brera Calcio and for rugby by Amatori Rugby Milano.

The stadium initially had just wooden decked seating but this was soon replaced in the 1920’s by a grandstand, the central section of which survives today. The stadium was extended significantly in the late 1930’s which coincided with Venezia reaching Serie A in 1939. The ground remained unchanged and in 1966 a scarcely believable 26,000 people gathered at the Penzo for the home game with AC Milan. Just four years later the stadium was severely damaged by a storm that directly hit the island of Sant’Elena. Much of the stadium was deemed unsafe and the capacity was slashed to 5,000. The return of the club to Serie C1 in 1988 and Serie B in 1991 saw temporary tubular stands erected over the athletics track on the long neglected “popular” side, giving the Penzo an enhanced capacity of 16,500. Natural disaster befell the Penzo again in the summer of 2012 when a vicious tornado again lashed the ancient edifice and caused severe damaged to the external walls, leaving the stadium unsecure. The authorities deemed it unsafe and temporary refuge was sought at the ground of Rino Mercante di Bassano del Grappa in Bassano Virtus. Hasty repairs were carried out at the Penzo but on the eve of the clubs’ return it was noticed that one of the floodlight towers had been badly damaged so the club had to play home games for an extended period at the Stadio Piergiovanni Mecchia in Portogruaro.

The Penzo sits on the island of Sant’Elena and is most commonly approached by boat. It sits adjacent to a 15th Century monastery and the beguiling bell tower of San Giovanni Battista. During the club’s heady days of Serie A membership in the 1990’s then owner Maurizio Zamporini pursued a new stadium project on the mainland by the airport at Tessera. However, the project floundered when the civil aviation authorities (ENAC) refused to conduct a feasibility study for the impact of the new stadium on the airport.

The original Associazione Calcio Venezia were formed in 1907 following a merger of two amateur teams Palestra Marziale and Costantino Reyer. The club played its nascent seasons at the Campo San Bartolomeo. Initially the club played in Red and Blue halved shirts, identical to Genoa, but soon changed to a Green and Black livery.

The club notably won the Coppa Italia in 1940/41 when they defeated Roma 1-0 in a replay following a 3-3 draw in the capital. The team would finish third in Serie A the following season which would be an all time high for the Lagunari. The Venezia side in those days including Ezio Loik and Valentino Mazzola both of home would become part of the legendary “Il Grande Torino” side that tragically perished in the Superga air crash of 1949. A poignant memorial to the illustrious pair can be found at the southern end of the grandstand at the Penzo.

In 1987 the club merged with AC Mestre and incorporated their orange kit in their new and eye catching “arancioneroverdi” colour scheme. The club enjoyed a revival in the late 1990’s after finishing runners up in Serie B to Salernitana in 1997/98. Venezia boasted some fine players including Felipe Maniero, Christian Vieri and the mercurial Uruguayan Álvaro Recoba. The club we relegated at the end of 2001/02 and volatile owner Maurizio Zamporini upped an left for US Palermo citing frustration with the team and lack of progress over the new stadium as a reason. Within three years of his departure AC Venezia were insolvent. A new club was born, Società Sportiva Calcio Venezia and started the 2005/06 season in Serie C2. After just four seasons of existence the new club were also declared bankrupt.

Yet again a new club emerged, Unione Venezia starting in the non-professional Serie D. In 2011 the new club was taken over by a Russian businessman Yuri Korablin, former mayor of Khimki. Legend has it that he was visiting the ancient city as a tourist and on a particularly wet day he went into a shop to buy some more suitable footwear. His eye was diverted by the orange, green and black replica shirt of Unione Venezia and his interest was aroused. The investment initially paid off, promotion was secured to Serie C and they also won the Scudetto Dilettanti, the end of season tournament to decide the overall champion of the nine regional divisions of Serie D.

At the end of the 2014/15 season the Russian’s patience with the authorities of the clubs’ near twenty year quest for a new stadium ran out and he withdrew his support of Unione Venezia. For the third time in ten years the cities’ senior football club was declared bankrupt. For the current season yet another phoenix club has been formed to play at the crumbling Penzo. In today’s Serie D match Venezia FC take on Liventina, and the locals welcome another new president, Joe Tacopina, an American lawyer, to the stadium for the first time.

The new club have shown their intent already by winning their first six league games and take only three minutes to open the scoring on a sunbaked afternoon. Halfway through the opening period the Lagunari double their lead, both goals come from Liventina’s inability to clear the ball. The hosts look very comfortable and play well within themselves during the second half while their guests huff and puff to create even a slight chance. They finally succeed two minutes into injury time but the referee, who had made a long trip from Reggio di Calabria in the deep south, promptly blew his whistle.

Cost of entry was €15 in the grandstand which afforded great views of the monastery next door and of the sea beyond. Cheaper tickets could be had behind the goal on the temporary style seating but tall fencing and netting gave a pretty poor view for the enthusiastic flag waving “ultras” that gather in the curva sud. 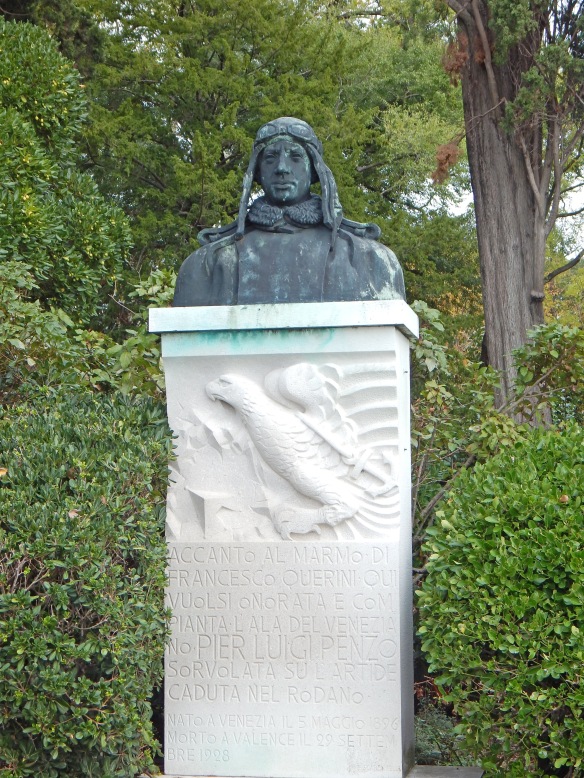 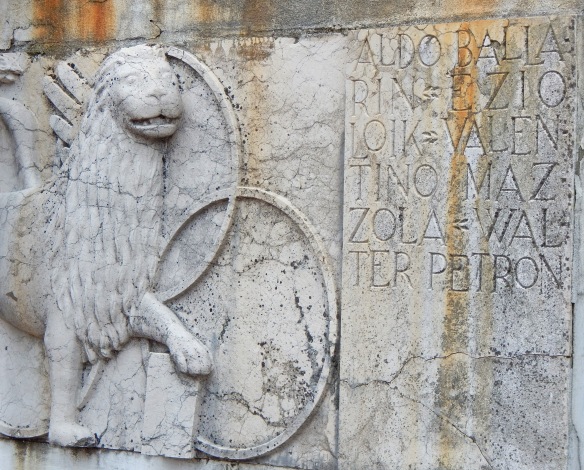 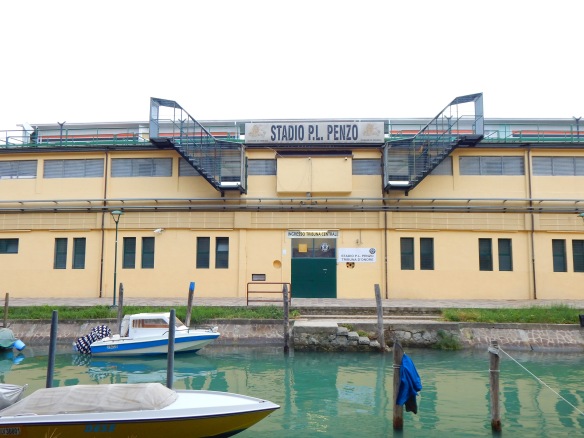 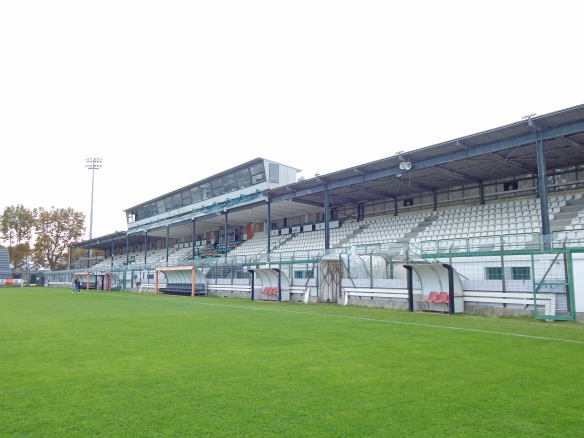 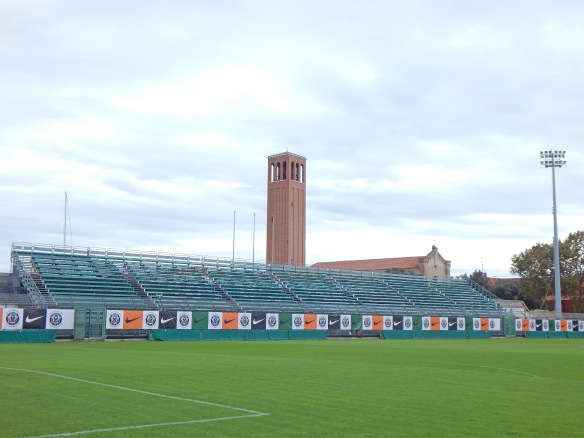 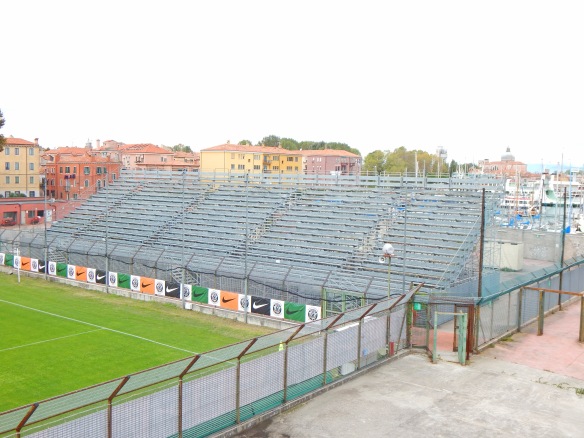 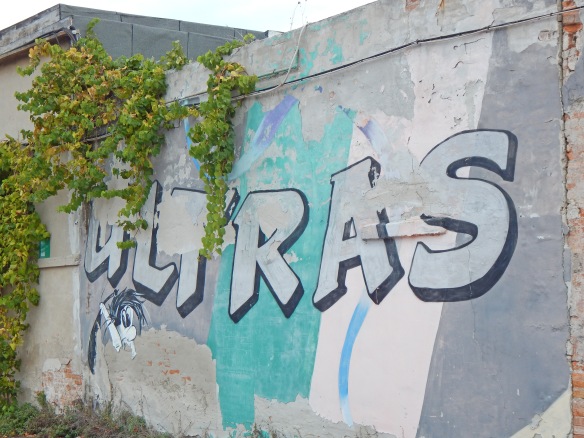