Holiday football watching can be a nervy affair, usually booked months in advance and ahead of fixture releases. So I was sweating on the release of Lega Pro fixtures to see if Sorrento would be at home while I was there. Clicking expectantly on the link, dammit away to Pavia, how about Nocerina? Away too! Come on San Vito Positano, nope away as well. Then I remembered a side from the Bay of Naples that seemed to be punching way above their weight in Serie B, Juve Stabia, they can’t be that far away from Sorrento? Joy of Joys home to Livorno! I was sorted, or was I? Livorno, had to answer match fixing charges yet, what would be the outcome? Livorno, guilty, demoted! Did that leave Juve without a game??? Huge sigh of relief when the fixtures were rejigged and Juve were paired that weekend with Vicenza.

So Sunday lunchtime I bounded on to a creaky, graffiti covered train at Sorrento heading east on the Circumvesuviana line to Castellammare di Stabia, or more precisely the station of Via Nocera a short walk from the Romeo Menti stadium.

Arriving two hours before the 3pm kick off, a match ticket was secured for the princely sum of 38 Euros, following the close scrutiny of my passport and exhaustive database searches for any misdemeanours.

My mind assured I was now getting into the game, my stomach needed sustenance and locating a pizzeria nearby a hearty slice of salami and chip pizza made me chuckle as I cast my mind back to my home town in south Essex where such estuarine cuisine could be more reasonably expected than in Campagna, home of fine Neapolitan dining.

Next on the pre match ritual was securing a programme and other assorted souvenirs. No programme sellers to be found anywhere, surely a Serie B side issued? I manfully strode into an Ultras bar, to be greeted with one of those everybody falling silent moments. I studied mementoes on the wall briefly when a large, swarthy man addressed me in Italian. My Italian is limited especially the rat-a-tat Southern dialect, however a brief discussion ensued and I was informed that the club no longer issued programmes but clearly they were taking to me and another Ultra provided me with back copies from last season. Before I left the big man who was still staggered an Englishman wanted to see his team, said in faltering English “You’re not supporting Vicenza are you”, to which I hastily replied, “I am from the South of England I would never follow a Northern team”. The right words clearly as I left with pats on the back and considerable bonhomie. The Southern Italians undoubtedly view everything from Rome and above as a foreign land. There were no other official souvenirs of any sort available so I satiated my nerdism with a risky purchase from a street hawker. Now quite possibly the lamest pennant in my collection, clearly unofficial and free water damage to the top corner, mine for only five euros. Well when in Castellammare!

After snapping the superb fan graffiti around the neighbouring streets I was into the stadium. What looked like being a paltry crowd as kick off approached suddenly swelled as the Curva Sud was flooded with Ultras, large flags aloft and loud chanting. Two Ultra leaders climbed the security fence, one with a loudspeaker, to orchestrate the masses while seeing no part of the game themselves. A red flare welcomed the players to the pitch as surprising fervour mounted. Surprising as Juve had been soundly beaten in their opening two fixtures and but for cheating clubs with points deductions they propped up the fledgling table.

Vicenza opened the stronger and with Gianvito Plasmati they had the archetypal Italian centre forward, flowing locks and theatrics the great master Inzaghi would have been proud of. There was no real surprise when Dominique Malonga, a nimble foil to Plasmati, opened the scoring on eight minutes with a deft shot that beat Seculin in the home goal with ease. However, gritty Stabia dug in and popular centre back Gennero Scognamiglio powered in a header from a set piece ten minutes later.

The second half saw the home side batter the visitors but a winning strike did not materialise and the Stabiese behind the goal had to be content with a first point of the season. Their support and noise throughout the entire game merited much more.

Final point to note that in my long football watching career, this is the first professional match I can ever recall where there was not a single visiting supporter present. 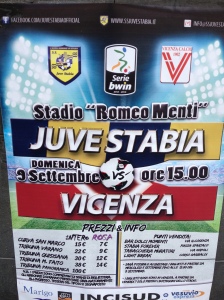 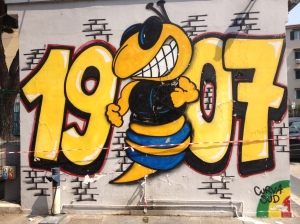 The main stand at the Romeo Menti 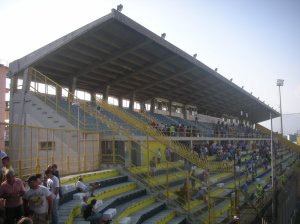 The Curva Sud in fine voice

Simon Inglis’ epic tome on European football grounds had long made me hanker after seeing a game at the Stockholms Stadion, venue for the 1912 Olympiad. It’s been the long held thesis that athletics tracks should not and cannot be enjoyed as a football venue. As with most things in life there is an exception to every rule and this venue knocks holes in that theory big time.

Designed by architect Torben Grut, this fine venue with crenulated roofs, flag poles galore, tented royal box and carved roof supports is little changed a century after it’s inauguration. However, the footballing future, at least, of the Stockholms Stadion looks uncertain as the resident club, Djurgården IF, decamp to the new Stockholm Arena with Hammarby at the end of the 2012 season. With AIK taken up residency in the new national stadium it means that in one season the Söderstadion, the Råsunda and the Stockholms will be lost to football.

Arriving at the stadium is easy, tunnelbana to the simply titled Stadion station gets you in the mood, proudly displaying a 1912 Olympics poster and the crests of the resident clubs past and present.

The stadium greets you with a retro board advertising the latest Allsvenskan clash for the home club against Gothenburg based BK Häcken. A circumvention of the exterior is a must to fully appreciate the workmanship in this construction. Tall towers in the corners, two with roof mounted floodlights, statues of athletes contorting in Olympian performance, weather vanes, ostentatious lamps and vintage turnstiles. The Stockholms Stadion has it all.

Armed with a free programme I take my place in section O a few sections away from the flag waving Ultras. The seats are numbing wooden planks but I don’t care as the full beauty of this stadium grabs me. It’s a rare and true beauty that can only be obtained from the patina of old age.

On the field Djurgården are little match for their title chasing visitors and Häcken stroll to a comfortable 3-0 win in front of 5,594 people.

If this season is to be the last for football in this grand old stadium then it is a truly sad time, but I am glad to have seen a game in one of my all time favourite venues.

(First published with extended gallery by In Bed With Maradona)

Arriving at Stadion station by Tunnelbana

Pointing the way to Djurgården IF and the Stadion

The main stand and royal box