With rivers and canals in Denmark’s capital city frozen over and a biting easterly wind that made the skin on your face harden, visiting the Parken Stadion took on the mantle of an extreme groundhopping adventure. Undersoil heating at the Parken meant even with a pitchside temperature of -8 the game was never in doubt.

FC København were formed relatively recently in 1992 as something of a Danish super club have returned from the lengthy winter break with an ample lead at the top of the Superliga table. This evening’s opponents are Silkeborg from the Danish mainland and lie next to bottom with a pretty sorry away record. The home side completely dominate proceedings with the visitors seemingly unable to construct anything of note in front of goal. Their lack of ambition makes them easy pickings for a rampant home side. Much vaunted youngster Andreas Cornelius is the star of the show, his break away and calm finish for København’s third ensured the points were staying in the Parken. The visitors pulled one back with an expertly taken free kick from Jakob Mikkelsen but it was all too late.

The Parken Stadion designed by Gert Andersson was opened in 1992 at a cost of 85 million Euros. It was built over site of the old national stadium, the Idraetsparken famed its classically curved roof. The Parken has a current capacity of a little under 40,000 with much of one end lost to corporate suites it is smaller than it looks from the outside.

Aware of the Sektion12 Ultras of FC København and the infamous Danish fan referee attack at the ground in a match against Sweden in 2007, I was a little sceptical of getting a ticket in this end but my reticence proved to be unfounded. There was a capo in his metal tower at the front of Sektion 12 leading the ultras in song and choreographed bouncing, copious flag waving and beer throwing completed the boisterous but cheerful proceedings.

So that was the Parken, although it does come with the added bonus of the adjacent Østerbro Stadion, home to BK 1893 and BK Skjold. Both clubs share the 7,000 capacity athletics track for their fourth tier matches in the Denmark Series. It is a very photogenic stadium, the grandstand abutting St.James’s Church and the perimeter of the track surrounded by sculptures in nerve and sinew straining sporting activity. Sadly all leagues outside of the Superliga were still on their winter break so no football was taking place. 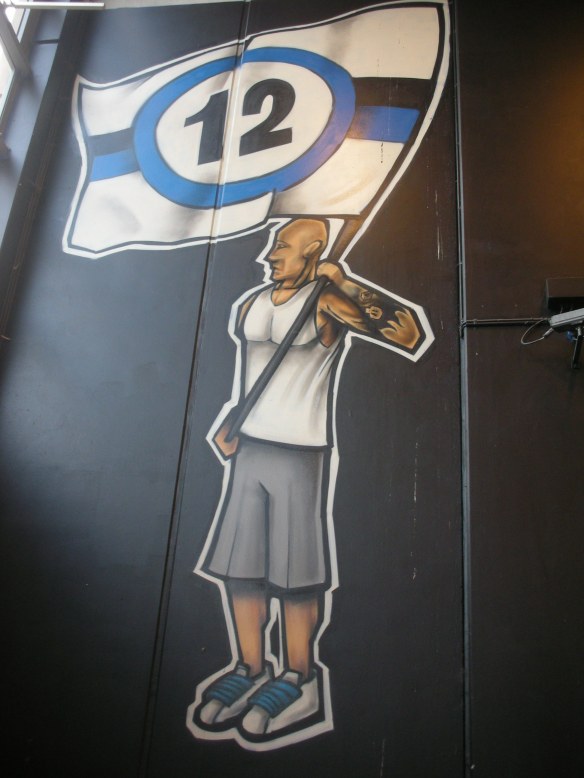 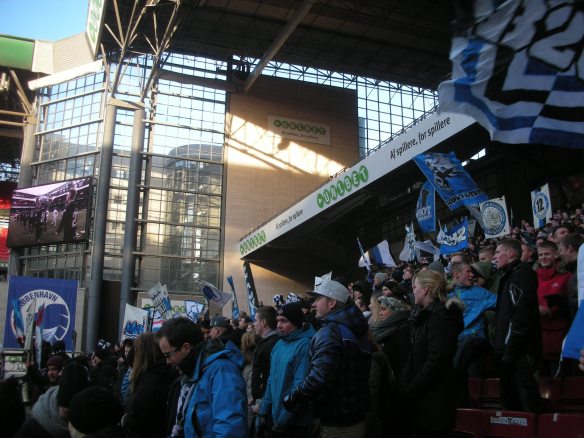 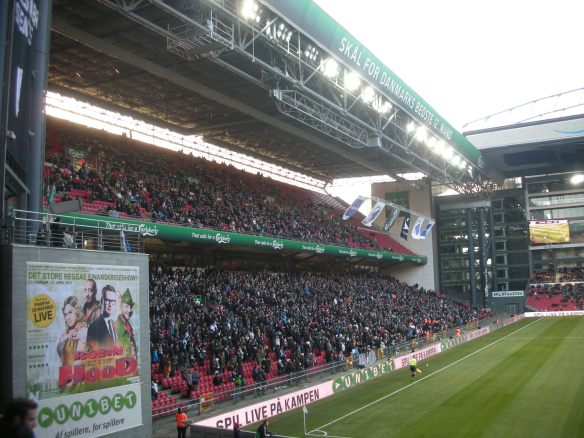 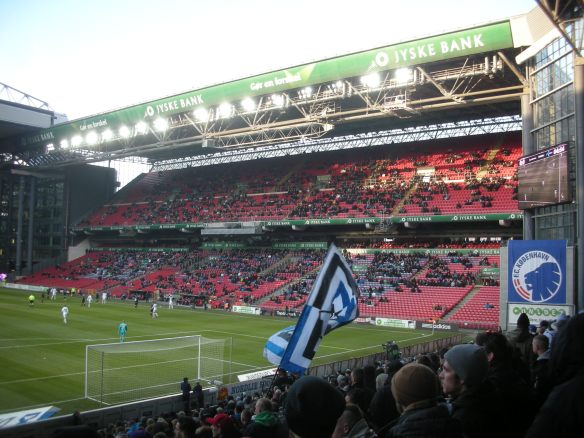 Why are many football stadium enthusiasts so keen on floodlight pylons? Sparingly used although essential to the development of the game since the 1950’s what draws a man to these electrical landmarks? I think the answer is just that, they are invariably the first sighting of a football ground when arriving in a distant town or foreign field for the initial time. Like viaducts, textile mills, canal locks they are also fast becoming somewhat redolent of bygone times.

Darwen FC claim to have staged the first ever football match under floodlights as long ago as 1878. Of course there was no national grid then so any use of artificial lighting would be battery powered and seemed dependant on luck rather than a sustainable power supply. Bramall Lane and the ground of Thames Ironworks, the forebears of West Ham United, also conducted early experiments with floodlighting.

That forward thinking innovator on the pitch, Herbert Chapman, also saw the light earlier than most when he had lights installed at Highbury in the 1930’s. However, Arsenal could not gain Football League sanction to use them. So once the authorities caught up some twenty years later it fell to Southampton to become the first club to “officially” use floodlights to stage a match. The friendly against Bournemouth and Boscombe Athletic was a resounding success and electrical lighting was here to stay. It opened a new source of income for many clubs with European friendlies against exotic opponents becoming de rigueur in the 1950’s.

Sadly a modern trend with ever increasing stadium sizes that the traditional pylons at many grounds have been replaced by roof mounted lighting, Old Trafford, Elland Road and Anfield were among the first to ditch their traditional corner pylons. Newer builds like Huddersfield’s John Smith’s Stadium and Wigan’s DW Stadium have thankfully been constructed with traditional corner pylons. There has also been a modern trend towards “stick” pylons replacing the big industrial looking pylons of “proper” grounds. To the purist these stick pylons are very much an anathema.

There are, of course, multiple different floodlight manufacturers and stadium architects, so the purpose of this article is to highlight some of the more amazing floodlight pylons from around the globe. Here are some of my personal favourites in no particular order. 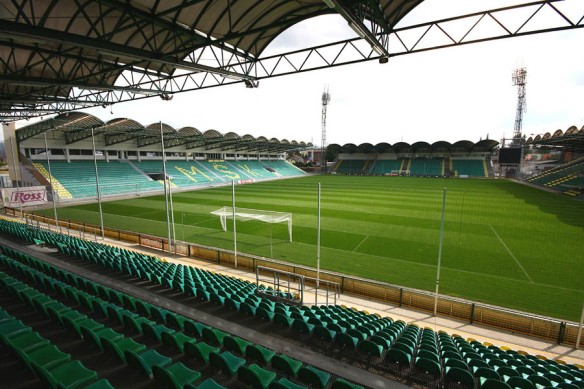 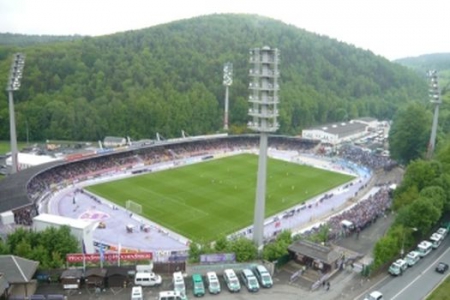 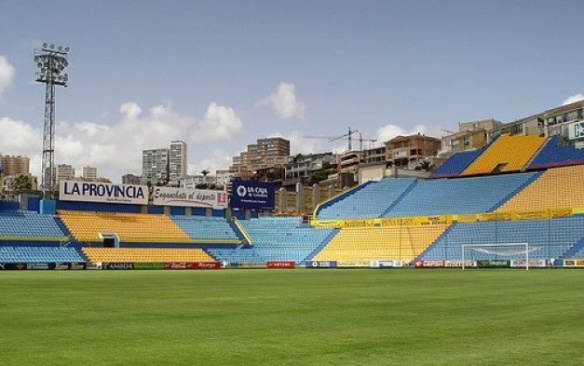 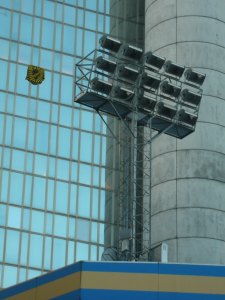 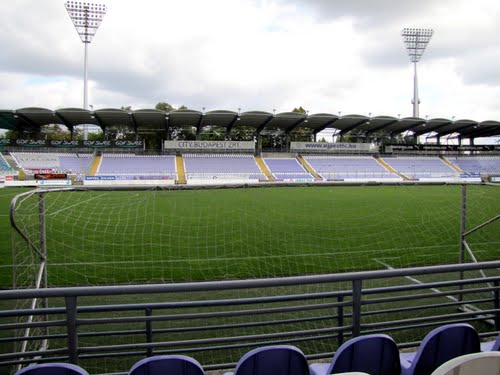 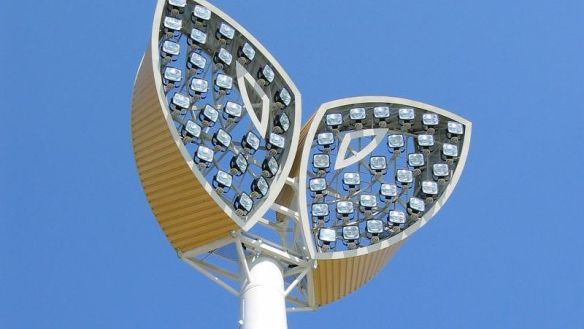 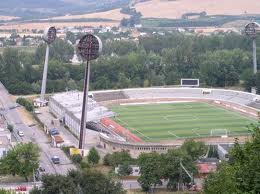