Oud-Heverlee Leuven were formed in 2002 after a merger of three existing Leuven clubs into a city wide club that has so far spent four seasons in the top division of Belgian football, most recently in 2015/16.

Of the three merged clubs the most senior was Stade Leuven, one of Belgium’s oldest teams, having been formed in 1903 and boasting the low RBFA matricule number of 18. Stade spent once season in the top flight, 1950/51, but spent most of its history in the second and third division. They were in the third division at the time of the merger.

The second of the triumvirate of clubs was Daring Club Leuven who began life in 1922 and were assigned matricule 223. Daring’s heyday was in the 1950’s when they competed in the third division alongside Stade Leuven. Daring even joined Stade in the second tier for one season in 1951/52 following Stade’s relegation from the top level. Daring could only last that single season before relegation. At the time of the merger they were in the fifth level provincial leagues. Daring played at an athletics stadium, the Boudewijnstadion in Kessel-Lo, where their athletics wing still compete under the Daring Club banner. It’s now called the Arena Gaston Roelants after the legendary steeplechaser and marathon runner.

The youngest of the trio were Zwarte Duivels Oud-Heverlee who played at the still existent Gemeentelijk Sportstadion. At the time of the merger the Black Devils were the club in the ascendancy having been promoted to the third tier for the first time in 2000 after many seasons in the provincial leagues. Formed in 1957, the Black Devils has the matricule of 6142. Under the Belgian FA rules (sometimes loosely applied) in a case of a merger the more recent matricule is kept for the newly merged club, so 6142 was assigned to OH Leuven. However, in July 2018 the club successfully lobbied the Belgian FA to restore the coveted matricule of 18. The merged club created its distinctive crest from the colours of all three clubs, green (Stade), red (Daring Club) and black (Zwarte Duivels).

The newly merged Oud-Heverlee Leuven transformed Stade Leuven’s old Den Dreef (literally “The Lane”) into a 10,000 capacity stadium. The city of Leuven said they will build the club a new stadium if they could survive five seasons in the top flight. They didn’t survive, so the club play on at Den Dreef for the time being. Stade Leuven had played at the original Den Dreef since 1905 and interestingly some of the curved end terracing remains behind the current stands and serves as seating areas for fans in the beer, food and fan zones.

Following relegation the club were struggling financially in the 2016/17 season, not helped by a third party ownership wrangle involving then chairman Jimmy Houtput. The club were saved when, later that season, the King Power group, who also own Leicester City, purchased the club.

The ticket booths for the three home stands at Den Dreef are located on Kardinaal Mercierlaan whereas the visiting supporters access their stand from the main road called Tervuursevest. Entry to the stand behind the goal, where the livelier home support gathers, was 15 Euros. Free teamsheets were available from the supporters bar and every home seat had a nicely printed card with a player profile on it which could be folded into one of those dreadfully annoying clackers. Food and drink are purchased via a top up card available from a central point in each stand. Similar to many bigger Belgian clubs OH Leuven do not permit any type of bag into the stadium no matter how small, and security checks are quite strict. Today’s game sees around 50 Leicester City supporters taking advantage of a break in the Premier League to visit their “sister” club.

The match sees the league leaders hosting fourth place Lommel SK. OHL dominate the first half and deservedly take a two goal lead into the break. The second half was poor by comparison, Lommel offering scant resistance, OHL wrapped up the points with an injury time goal from a substitute. The official attendance was recorded as 8,603 but in reality there was around 3,500 people present, the stadium being around a third full. 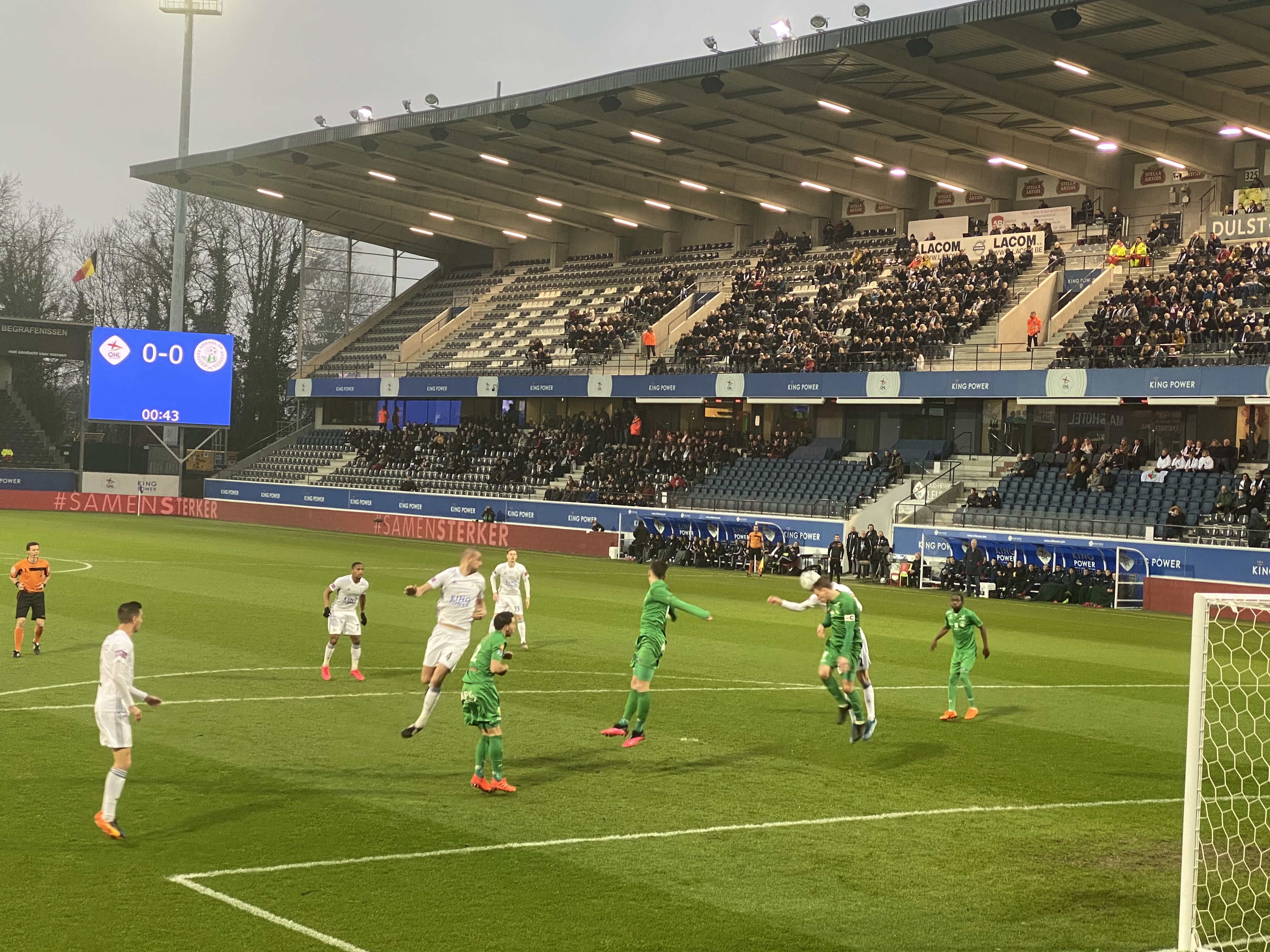 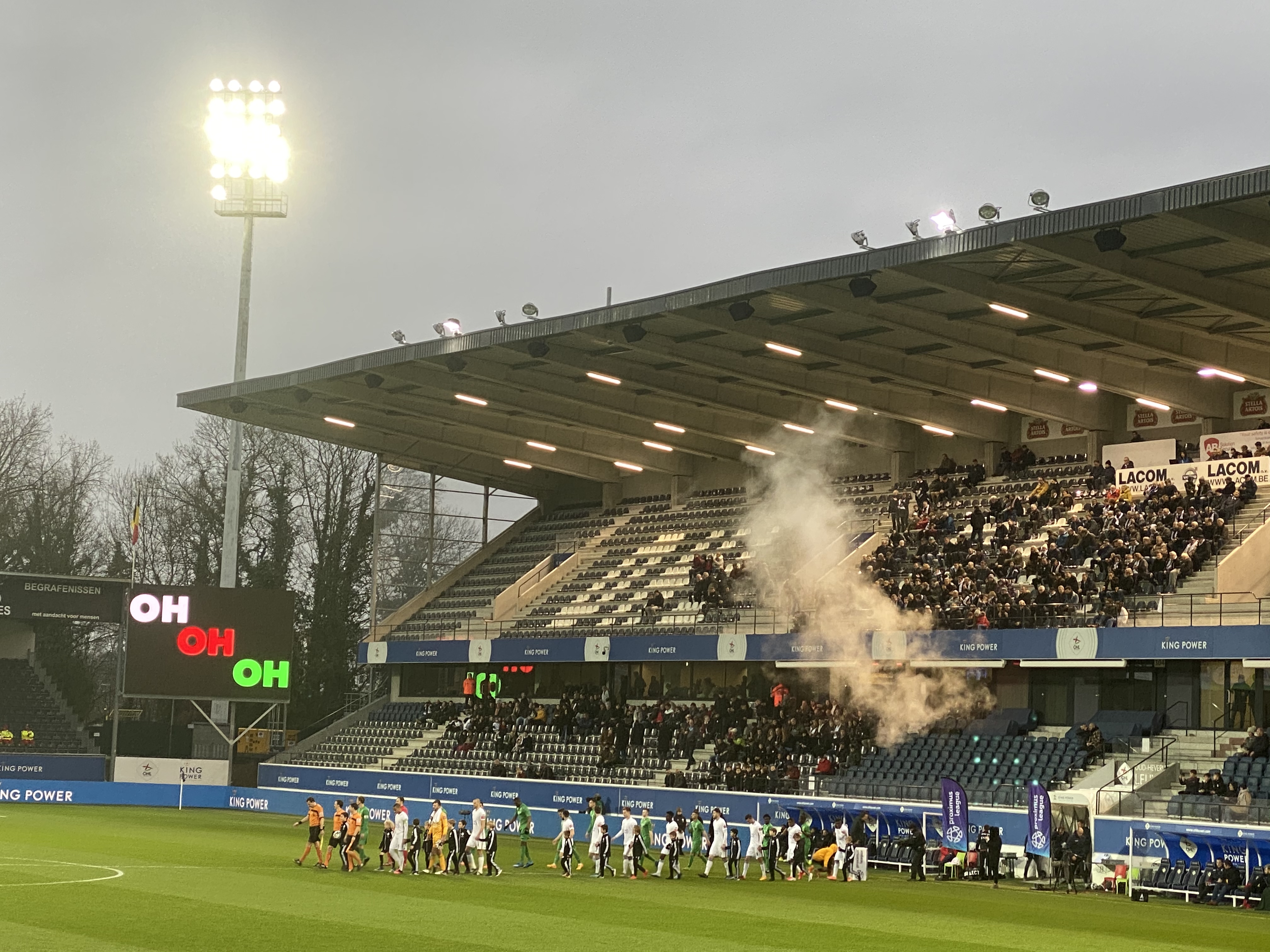 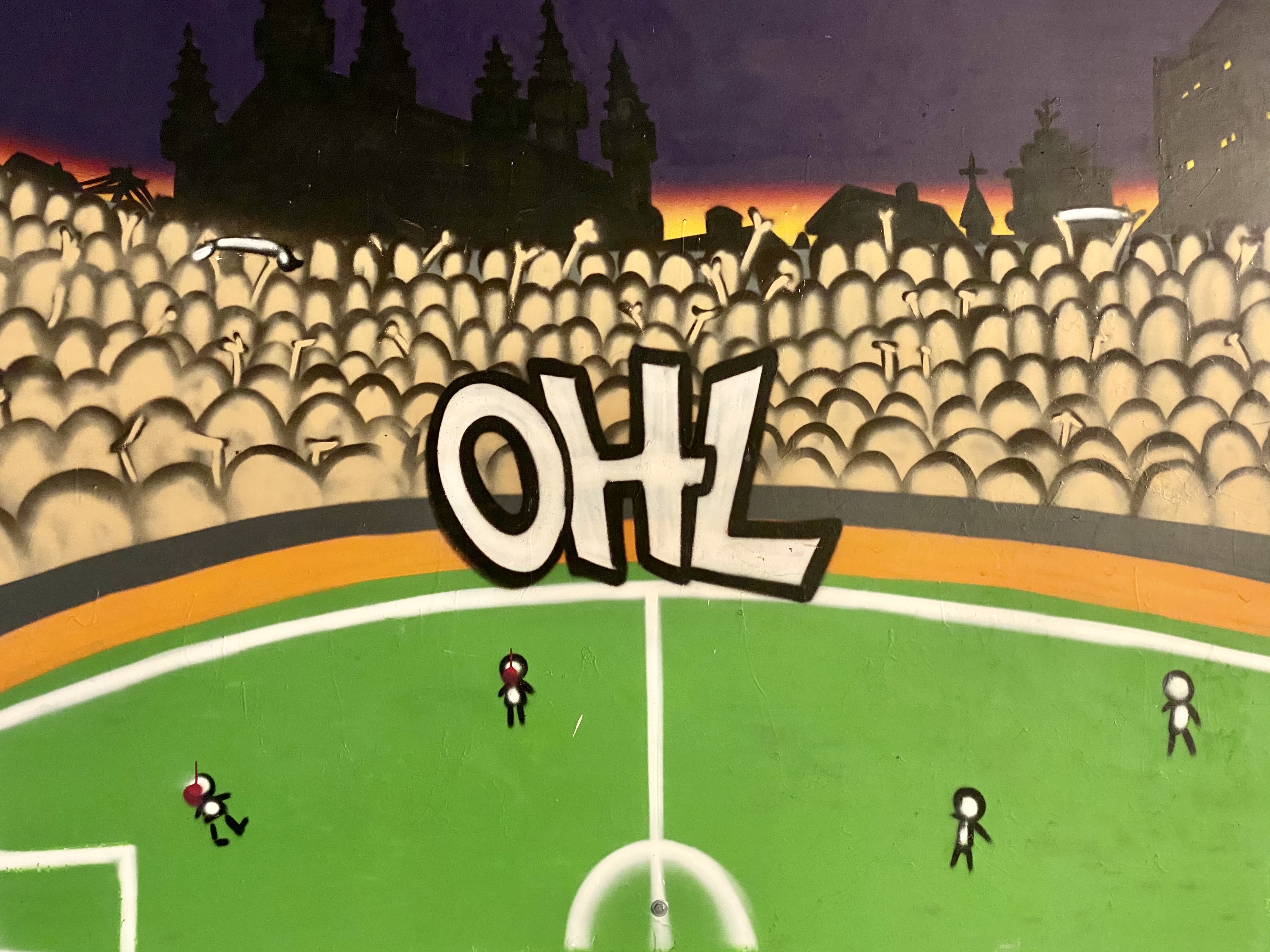