The Estadio San Mamés is renowned worldwide as a truly iconic sporting venue, and it is truly refreshing that Athletic Bilbao are reverentially aware of their history and heritage. But who was San Mamés? Saint Mammes was a third century Christian child martyr thrown to the lions by the Romans at Caesarea with his parents Theodotus and Rufina.

The San Mamés was opened in 1913 and will be celebrating its centenary by being pulled down in favour of the new San Mamés Barria stadium being built next to the current stadium on the site of the Bilbao International Trade Fair. Costing a reported 160 million Euros, the new edifice with have 53,000 seats and Athletic will move in to the initially three sided ground for the start of the 2013/14 season. The old San Mamés will be pulled down and then the fourth side will be constructed.

The current ground is steeped in history, substantially renovated for the 1982 World Cup by Manuel Maria Smith, it has seen some great occasions in world football. It is held in such esteem the nickname of “La Catedral” seems wholly appropriate. The statue of Rafael Moreno Aranzadi, “Pichichi” scorer of the first goal at San Mamés and a prodigious scorer in his career watches over the turf he graced with such skill. Though he had a short life, dying at the age of 30 from suspected typhus, Moreno is revered through the Basque region and the country as a whole. His nickname is given to the leading goalscorer award in the Spanish League each season and it is something of a tradition on European nights that the visiting captain lays flowers at the statue of Pichichi. It is said the gift will be rewarded with a good season and plenty of goals. The club’s rich history is admirably mapped out in the superb museum, voices and images of the past from the greats like Rafael Moreno, Iribar, Dani and Exteberria loom large over this season’s underachieving squad.

The Bilbao team that wowed Europe last season has broken down, players have left and star striker Fernando Llorente has been at loggerheads with the club all season and barely played. Their abject performance in the Europa League Group I against the likes of Lyon and Hapoel Kiryat Shmona has meant tonight’s game against Sparta Prague is meaningless, the hosts already out and the visitors safely through to the next stage.

Llorente is picked and given the captains armband, but his every touch is greeted with derision by the home crowd. “San Mamés divorces Llorente” screams El Correo the following morning. Llorente is pulled off at half-time along with Iker Muniain, Spain’s enfant terrible from their implosive Olympic football tournament campaign. Muniain, dubbed “the Spanish Messi”, having scant impression on a poor first half.

The second half is played out and it is the visitors that should have won, some profligate finishing on several occasions meaning the game ends in a drab 0-0 draw.

It is a shame that the San Mamés’ last European encounter was such poor fair, a decent and noisy crowd of 30,000 had paid a minimum of 38 Euros (unless you are a Socio) to witness the match.

The stadium empties and the famous arch of San Mamés glows in the night sky, it should survive the demolition. Unlike the ignominious demise of Wembley’s Twin Towers the arch is planned to be used as a footbridge over the Nervión, supporter’s wishes of its incorporation into the new stadium could not be accommodated but at least it will live on.

Despite a dull game, this visit will live long in the memory. Rarely have I been to a city where its football club means so much. Shutters are painted red and white, flags flutter on balconies, sun baked pennants adorn the walls of cafes and bars. This truly is more than a football club, it’s a cultural identity, Athletic are still fervently in favour of their Basque only player policy and they should be commended for their stance. Athletic is Bilbao, the blood that moves its body. 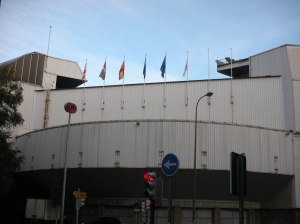 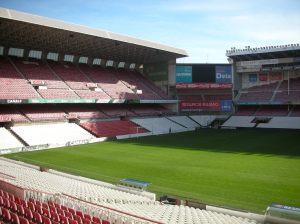 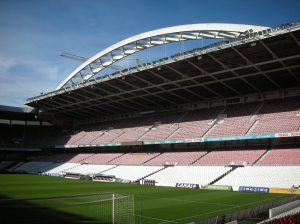 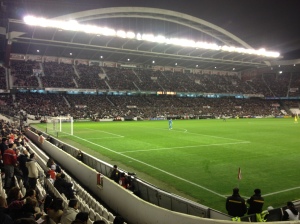 A little more than fifteen minutes outside of the city of Bilbao lies the small village of Zamudio. The local side Sociedad Deportiva Zamudio have been plugging away in the nether reaches of Spanish football since their formation in 1943. A brief flirtation in Segunda B in the mid 1990’s was the zenith of their progress to date. These days they play in the Tercera Division (the fourth tier of Spanish football), a veritable leviathan of a regional competition featuring no less than 18 divisions. Zamudio and today’s visitors compete in Section 4 which covers this area of the Basque region, or Bizkaia in Euskara. Arriving at the Campo Gazituaga for the 4.30pm kick off, I am slightly surprised that the handwritten sign on the entrance table is asking for 13 Euros for entry but the ground looks inviting and the elderly man in charge of admissions, despite not having a word of English, is very welcoming, providing a teamsheet and organising a free pin badge from the bar for his unexpected visitor.

The bar is handsomely equipped and dispensing liberal glasses of red wine amongst other welcome beverages. The stand, which could seat 500 people, is smart and set into what looks like a large traditional Bizkaian house. Its effortless beauty adorned with a large and smartly painted badge prominently positioned at the rear of the stand. On the far side is ample and somewhat unusual wooden terracing. Also in the corner on the far side sits a traditional manual scoreboard.

The scoreboard wasn’t troubled until injury time in the first half, when Luariz, shaven headed centre forward for the visitors, was upended by Santamaria for a penalty. Not for the first time strict referee, Senor Mardones, flourished a yellow card with not inconsiderable zeal. The spot kick was neatly dispatched by Elustondo. The referee had already reduced the visitors to ten men when Aranburu was shown a straight red card, having already been booked, for a rugged challenge on Jaba.

Lagun made the decisive breakthrough seconds into the restart when Luariz was allowed to waltz through the home defence and slot the ball past Galder with some aplomb. Four minutes later the referee reduced the visitors to nine men when an injudicious handball by Ruben resulted in a second yellow card followed by a red for the midfielder. The impressive Luariz was immediately sacrificed so a defender could take the field.

The anticipated siege on the visiting goal really did not happen to the last five minutes of this decent encounter when Zamudio finally upped the tempo and dominated their numerically disadvantaged guests. Bulky centre forward Libano pulled a goal back but any sharing of the spoils would have been harsh on the visitors.

Senor Mardones must still be writing up his reports following his ten yellow cards and two red cards brandished with alarming regularly throughout the game. 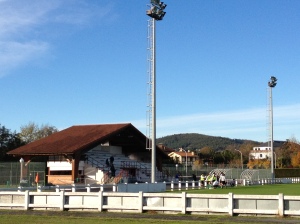 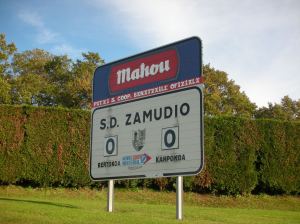 Every so often a football ground can make the hair on the back of your neck stand up, be it because of immense scale, architectural audaciousness or its patina of old age, the thrill of discovery is probably the reason that we all take photographs of the grounds we visit. One such stadium that falls into the “patina of old age” category is the home of Sweden’s IFK Nyköping. The Folkungavallen, which literally translates as “young peoples ground”, was the choice of name selected by the townsfolk in 1925 when the local paper, the Södermanland News, held a vote. It is a stadium of immense beauty, still radiant and effortlessly beguiling despite the onslaught of time. The venue was established in 1914 for the Nyköping Agricultural Fair, it wasn’t used as a sports field until five years later. The gatehouse is engaging enough as it is, proud and grandiose, but when the vast gates creak open the piece-de-résistance is revealed in the form of the visually stunning 1926 wooden grandstand an inordinately attractive replacement for the earlier stand at the ground. The intricate side panels, the terracotta tiled roof, its flag poles, the skill of the carpenters for the internal skeleton of the roof, it’s a really stunning piece of architecture. Its proximity to Skavsta airport makes it a relatively easy ground to visit and one that cannot be recommended highly enough. 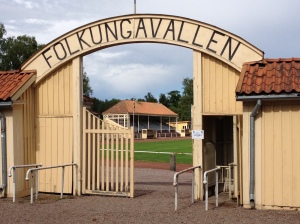 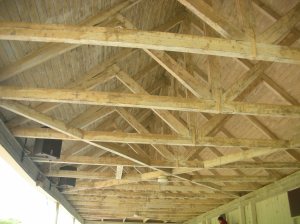