The seventh Serbian groundhop weekend took place in early November 2019 with the majority of the party landing in Belgrade early on Friday on Wizz Air’s budget friendly flight from its Luton hub. The usual lottery of waiting for the Serbian FA to set the SuperLiga and Prva Liga kick off times and days as late as the preceding Tuesday threw us a totally unexpected Friday afternoon fixture in Bačka Palanka, a ninety minute bus ride from Nikola Tesla airport.

The Prva Liga fixture against Dinamo Vranje, a six hour journey from the deep south of Serbia, was set for a 1.30pm kick off which left things a little tight time wise but we made it to the Stadion Slavko Maletin Vava with ten minutes to kick off. A ticket cost 200RSD (£1.50) and you gain access to the seated main stand. It’s a two sided ground with an open terrace on the far side which is seldom used for any matches other than visits of Red Star and Partizan. Bačka’s three season stay in the SuperLiga, their first time in the top division, ended in relegation last season. The visitors from Vranje also had their first ever top level season in 2018/19 but also in ended in relegation, via the play offs, last season.

We weren’t sure of Dinamo’s travel arrangements up from the south of the country, but they certainly made a lethargic start to the game going behind in the opening ten minutes. Their task was made all the harder when Mladen Popović picked up two yellow cards in quick succession before half time. Bačka dominated the remainder of the match and a second goal for Nikola Žakula ensured an easy home win. 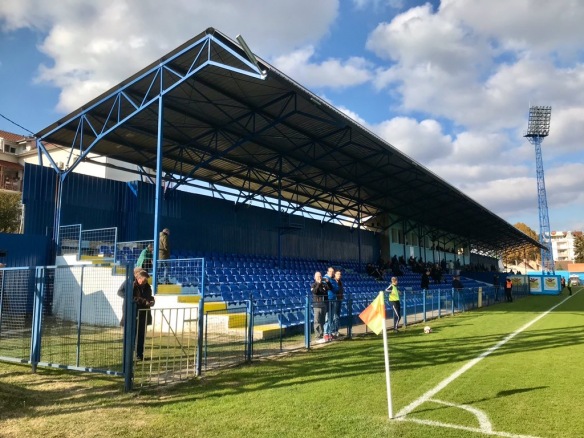 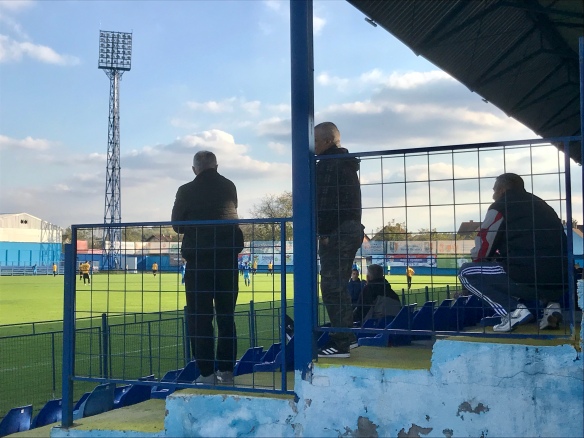 Back in Belgrade, some opted for an early night after the dawn departure from Luton while others sampled the drinking houses on offer around Slavija Square and Knez Mihailova with a new craft beer bar called Tri Kralja Beer Bar on Njegoševa proving particularly popular.

Saturday morning meant checking out of the Slavija as we were to spend Saturday night in Central Serbia. First up we had a two hour road trip to Gorjni Milanovac for a double header of matches on grounds that were adjacent to each other. At FK Metalac’s impressive looking stadium we were greeted by Ivan and Ivan two big Metalac fans who had agreed to give us a stadium tour before our first game at 1.30pm. They were immensely proud of their stadium which had been opened in 2011. Built by the parent company, Metalac is famous for its steel products like pots and pans, the club have grown from a works team formed in 1961 to a progressive club that has serious SuperLiga intentions, having last been in the top flight in 2016/17.

Time was ticking on towards the 1.30pm kick off at neighbours FK Takovo so we said farewell and the two Ivan’s told us to come to the main entrance after the first game and we would have complimentary seats in the VIP section of the main stand. Kindness and hospitality like this has been so prevalent during all our tours here.

After paying the 100 RSD (75p) entry we make the third tier game at FK Takovo just before kick off but in time to see the impressive stadium clock installed in the scoreboard. Bizarrely this precious time piece was removed at half time and reinstalled for the second half! Takovo were formed in 1911 and are the oldest club in Central Serbia. The stadium has large terraced steps on one side with seats installed in the middle of them in the colours of the Serbian flag.

Unfortunately for the lovely hosts, the away side, FK Loznica, scored twice in the six minutes before half time. Takovo make a better fist of the second half and their captain reduces the arrears on the hour. They batter the away team but just cannot fashion a deserve equaliser. A hugely entertaining game on a terrible pitch, the second half also saw an impressive amount of pyro from three Takovo fans but music from the Metalac PA system almost drowns this out. Takovo do not like their noisy neighbours (“They tried to put us out of business”), although it was interesting to find out the club presidents of both clubs are actually related! 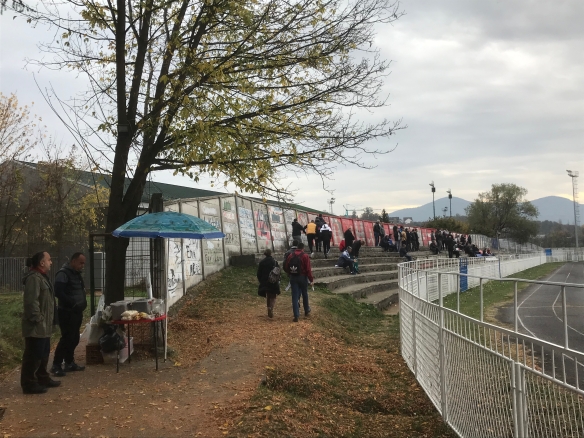 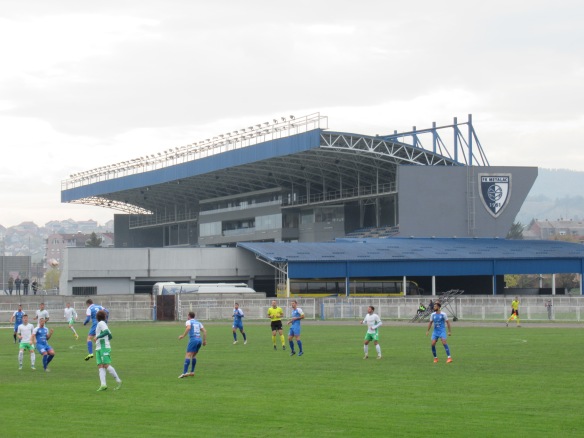 The game finishes promptly so there is sufficient time to take the short walk back to Metalac’s stadium where one of the Ivan’s is waiting to escort us to our VIP seats. I am asked what the score was by Ivan and I said Takovo lost 2-1 and he said “good”, there is clearly no love lost between these two clubs! Ivan then took his lucky season ticket seat for this “must win” game against Radnički Pirot.

Despite Metalac’s excellent start to the season there are less than 300 people present for this match which season the home side’s captain, Aleksandar Ješić netting the only goal of the game after ten minutes. You do wonder how SuperLiga aspirant clubs can succeed with such small attendances. 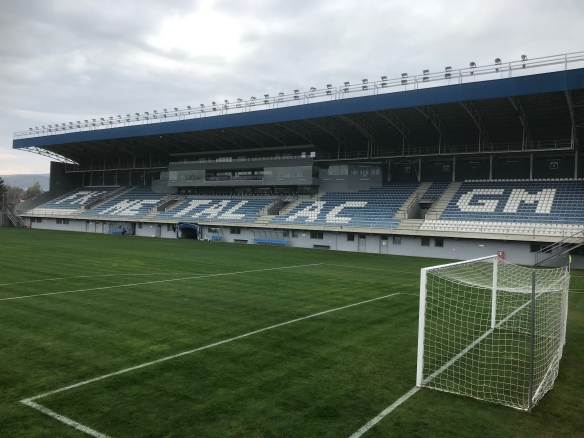 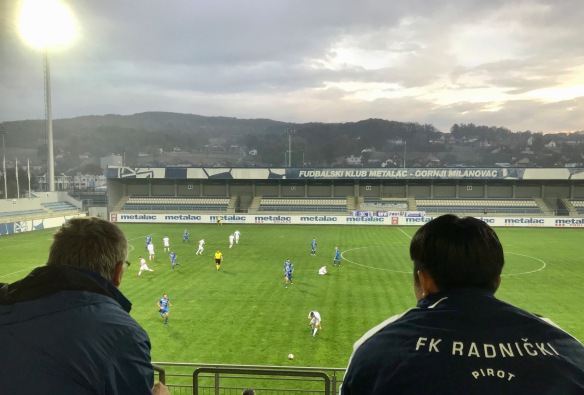 It’s been a truly great day and we adjourn to Grill G in Vojvode Mišića, a restaurant used by the Metalac players. We are joined at our reserved table by the Takovo president and in another room the Metalac president and directors and the match officials also arrive for food. The food is exceptional especially the smoked pig neck and the pljeskavica, a delicious spiced meat patty. The food and drink cost a little over £10 a head. The Takovo president, now completely sozzled, appears to want to get on our bus but is persuaded to leave after a lengthy speech where he tells us how excited he has been to meet us and that we are all “true football men”. Absolutely stuffed from the meat feast we leave Gornji Milanovac to head around two hours east to our overnight stop in the medieval city of Kruševac. Founded in 1371 by Prince Lazar Hrebeljanović ruler of Moravian Serbia, a powerful leader who was killed 16 years later in the Battle of Kosovo.

Kruševac is surprisingly lively on a Saturday night with a number of decent bars and cafes. We check out of our hotels for a 9.30am departure to Paraćin around a 45 minute drive to the north. We are at a third tier (Srpske Liga Istok) game at SFS Borac Paraćin. It’s a pretty basic ground, albeit with free entry, set in a large oval shape with a large bleacher style stand outside the perimeter fence. The early kick off suits our agenda but its played havoc for the visitors Trstenik PPT who can only muster a bare eleven players for this game which is over an hour away for them. No surprise that a fast and skilful Borac side put six past them without really breaking into a sweat. 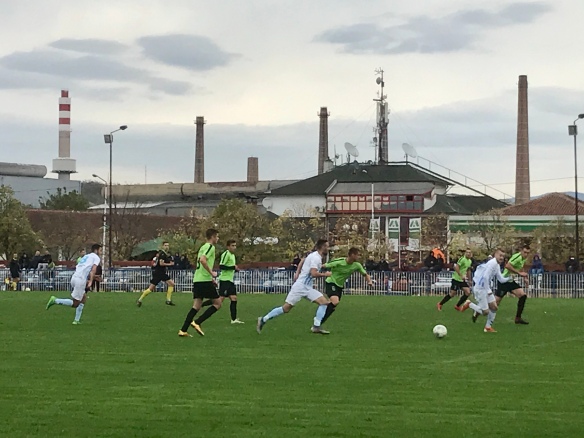 Before heading back to Kruševac for our final game at FK Napredak we have time to visit Paraćin’s hidden gem, the Gradski (Town) Stadion, home of FK Jedinstvo Paraćin. Formed in 1925, the club have a rich history including some great runs in the old Yugoslav Cup. In 1984 they reached the quarter finals losing to the mighty Hajduk Split and in 1997 they beat RFK Novi Sad and BSK Batajnica before losing in the semi final to FK Vojvodina. They spent some time in the second tier but now languish in the fourth tier Zona Zapad. Their stadium holds 12,000 and is a truly magnificent old school stadium. The main stand side is crumbling and graffiti welcomes the visitor to “Green Hell”. The opposite side and far end have large uncovered terraces which were painted blue in 2012 as the stadium was used in a film called “Montevideo, Taste of a Dream“ directed by Dragan Bjelogrlić. The place absolutely reeks of history and has definitely gone on to the future match visit list. 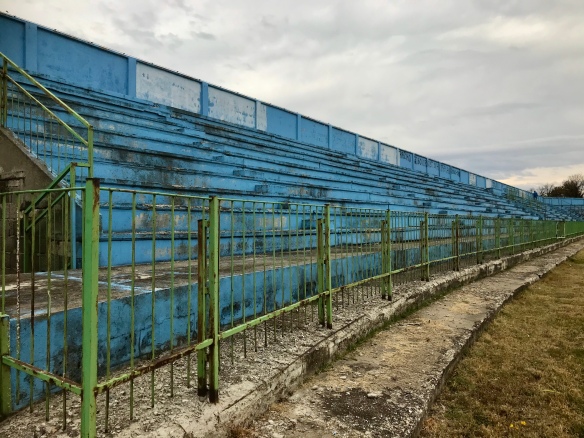 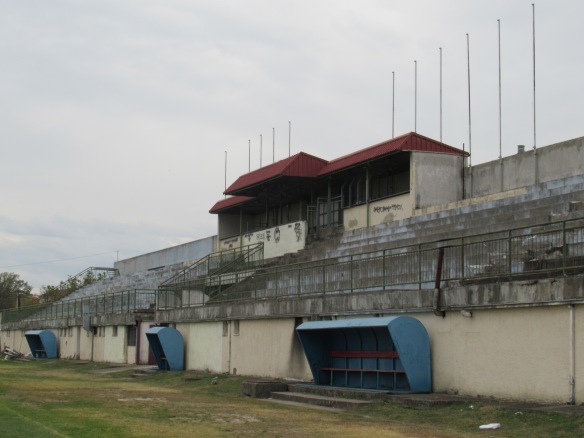 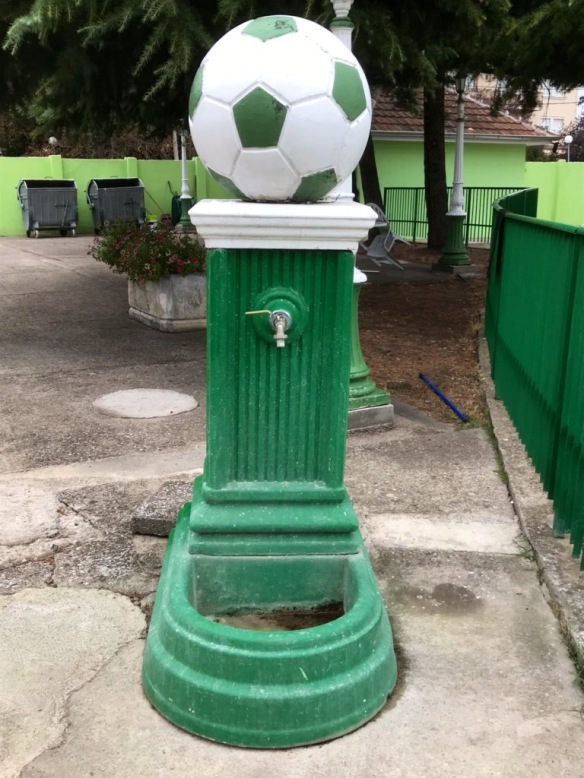 We arrived back in Kruševac in good time for the 3pm kick off at SuperLiga club FK Napredak. It’s a heady 300 RSD (£2.25) for a seat in the main west stand (Zapad) which is marked with a superb mural honouring Prince Lazar. The stadium is one of the best equipped outside Belgrade and hosted the 2012 Serbian Cup Final between Red Star and Borac Čačak. It also held the recent match between Serbia and Paraguay. The Mladost Stadion is an English style stadium with four rectangular stands and can hold 10,000 people. The capacity is not troubled this afternoon with only just over 500 gathering for this match against visitors from the far north of Serbia, Spartak Subotica. Around 20 of Napredak’s ultras group, Jakuza, gather in the north stand and attempt to create a bit of an atmosphere.

It’s a fairly ordinary game which Spartak win 1-0. The highlight was the dismissal on the hour mark of visiting goalkeeper Ivan Dokić. This means a debut for 19 year old Montenegrin keeper Miso Dubljanić, who promptly saved the penalty with his first touch in professional football. 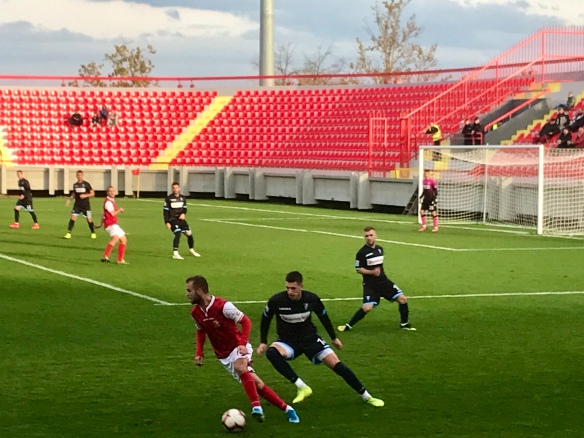 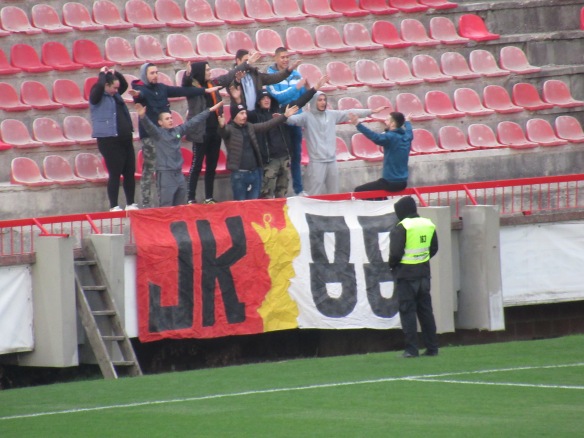 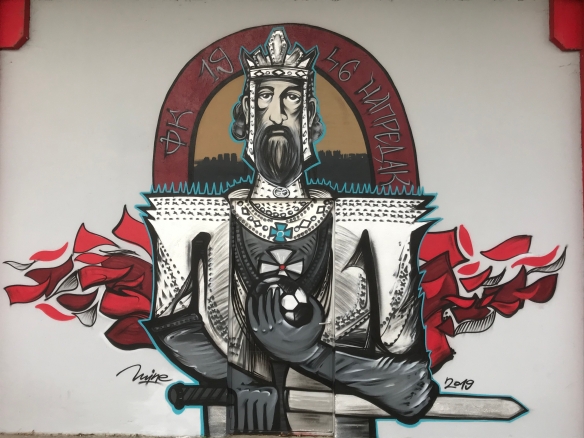 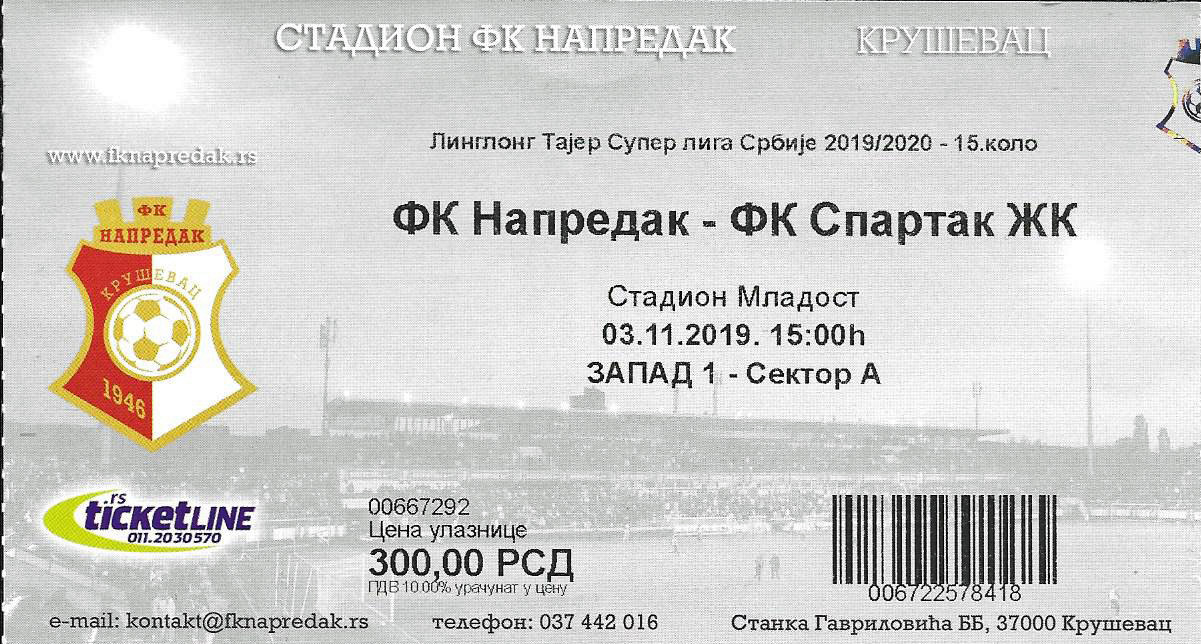 All too soon we are heading back to Belgrade, it’s been another laughter filled weekend in the company of Aleks Peković, Bogdan Mitrović and Teodora Rebić from Groundhopping Serbia. There are bound to be more organised adventures in this great country so please follow @GroundhopSerbia on Twitter or Serbian Groundhop Weekends on Facebook to keep yourself informed of any future trips. #SerbianGH7 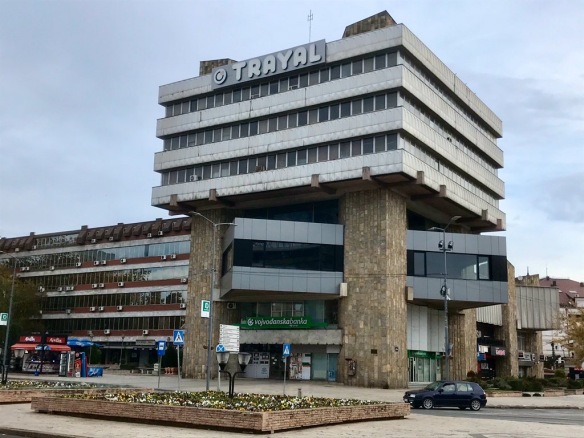 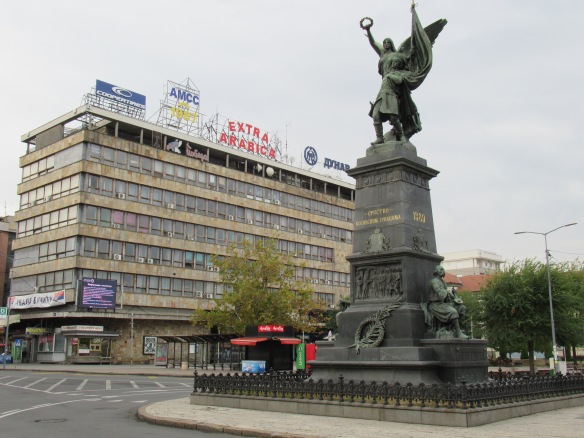 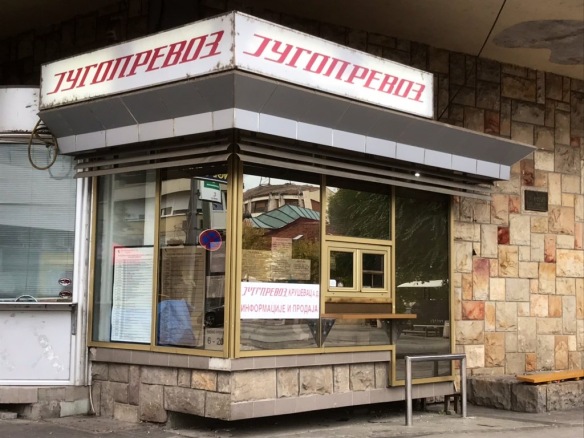 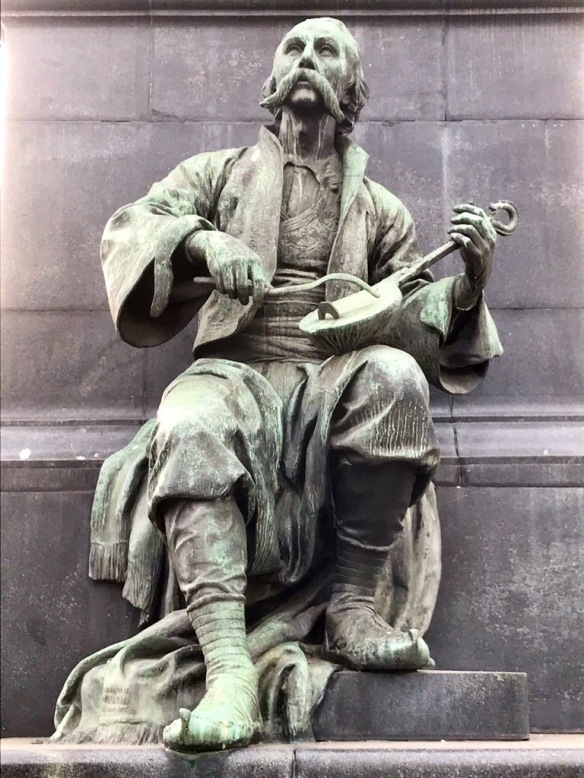 A much expanded version of this article appeared in edition No.53 of Football Weekends Magazine in March 2020.