Dumbarton were formed in 1872 making them the fourth oldest club in Scotland behind Queen’s Park, Kilmarnock and Stranraer. The club won the first two Scottish League championships, although the inaugural season the title was shared with Rangers after a deciding play-off was drawn 2-2 at Cathkin Park. Had the title been decided on goal difference, Dumbarton would have been outright champions.

The final table from that first season makes interesting reading with long lost clubs like 3rd Lanarkshire Rifle Volunteers, Cambuslang, Cowlairs and Abercorn competing alongside contemporaries such as Celtic, St. Mirren and Hearts. Renton were expelled from the league and their record expunged for paying their players.

In 1913 the pitch was re-orientated by ninety degrees and the club built a tiny stand with 80 seats which became known as the Postage Box. The club also experimented with greyhound racing in an attempt to make ends meet. The Clydebank Greyhound Racing Syndicate began running races at Boghead from October 1932. By the early 1940’s the racing had stopped but the small Bookmakers Stand remained next to the main stand as additional covered accommodation.

1957 was a big year for Boghead, firstly floodlights were erected, inaugurated in a game against Celtic, and then the club acquired the station canopy from Turnberry railway station. The South Ayrshire station had once served the famous golf course as part of the Maidens and Dunure Light Railway but this had closed in March 1942. The canopy was erected on the large previously open terrace at the Overwood Drive end. The all time record attendance at Boghead was also set in 1957 when 18,001 watched the Scottish Cup tie with Raith Rovers.

In 1979 the old Postage Box stand was replaced with a larger modern stand, although the new edifice still only had 303 seats. In 1980, then Sons’ manager, Sean Fallon, nearly convinced the legendary Johan Cruyff to join Dumbarton after an unhappy spell with Los Angeles Aztecs. However, the Dutchman who was 33 at the time, admitted that he almost signed but was put off by the bleak weather!

In the mid 1980’s the ground had suffered fire damage and the board of directors decided against repairing it. Their collective view was that the club would be better off looking for a new home, or redeveloping the existing stadium in it’s entirety to a 9,000 all seated venue. Their plans for the latter floundered and by the 1990’s the ground had become very run down, even given the additional income from Clydebank moving in between 1996 and 1999 having vacated New Kilbowie Park.

The last thing of note to happen at the old Boghead ground was assuming the role of the home ground for the fictional club Kilnockie FC for the film “A Shot at Glory” starring Robert Duvall and Ally McCoist. The plot of the film was Kilnockie’s epic run to the Scottish Cup Final.

Boghead further transferred to popular culture when the Glaswegian band The Supernaturals immortalised the old stadium with their song, “High Tension At Boghead”.

Boghead Park was demolished in December 2000 and made way for an extension to Miller Street. By this time Dumbarton had moved to a new stadium at the foot of the iconic Dumbarton Rock, a volcanic basalt plug with a history dating back to the Iron Age. The 18th century Georgian castle affords fantastic views not only of Dumbarton Stadium but also the Kilpatrick hills, the River Clyde, Loch Lomond and on to Argyll. The club’s unusual nickname derives from “Sons of The Rock”, the eponymic reference to someone from Dumbarton.

The Dumbarton Stadium was built on the derelict site of the William Denny and Brothers Shipyard which had closed in 1963. It has just one stand containing 2,020 seats, making it one of the smallest stadiums in the Scottish Professional League. The surrounding area around the stadium is being engulfed with new housing and the scope for extending the stadium is extremely limited. The club have looked into relocating to a new 4,000 capacity stadium at Young’s Farm on the west side of town but initial plans were rejected by the council. The record attendance at Dumbarton Stadium remains at 1,978 for the visit of Rangers when both clubs were in the Championship in 2015.

This afternoon’s game against league leaders Raith Rovers is a dour affair in freezing conditions and pouring rain. A couple of amusing stand offs between some boisterous visiting fans and the youthfully exuberant “Young Sons” actually provide some welcome distraction. A goalless draw looks almost inevitable until the Sons’ captain Stuart Carswell dramatically scored with virtually the last kick of the match. 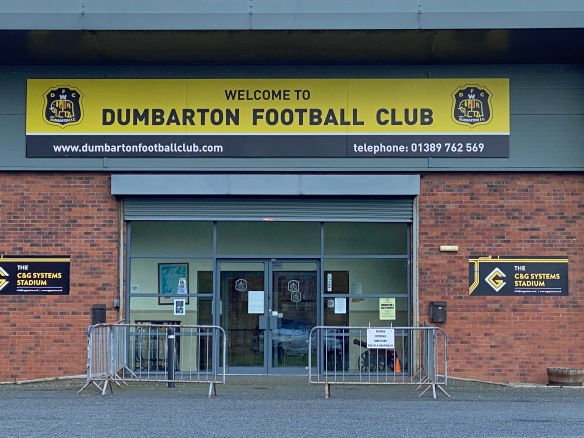 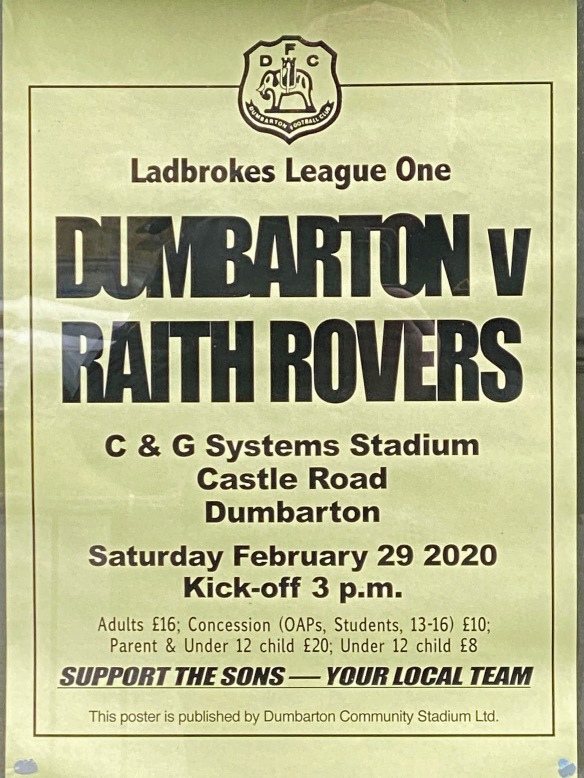 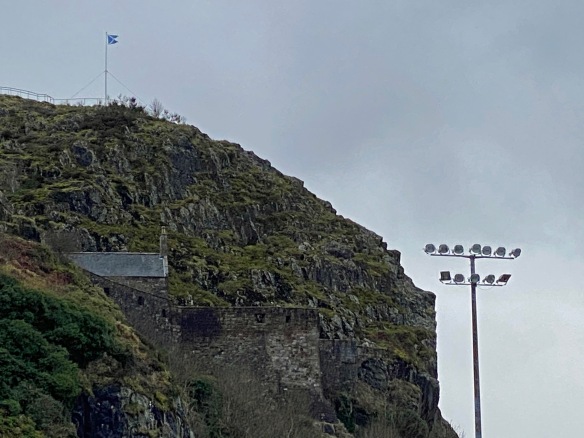 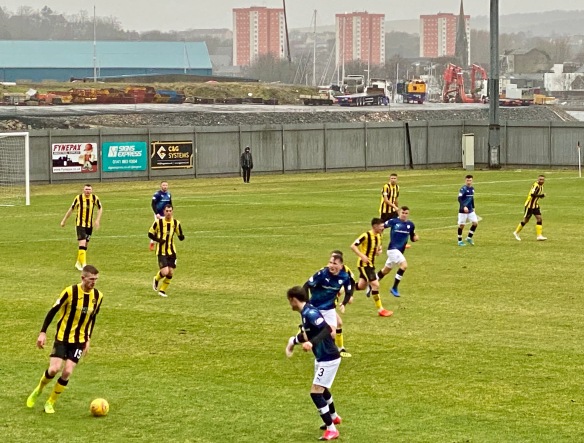 Sint-Truidense Voetbalvereniging were formed in 1924 from a merger between Union Sint-Truiden and FC Goldstar. Upon acceptance to the Royal Belgian FA they were assigned matricule number 373.

After humble beginnings, their first game against Cercle Tongeren attracted just nine spectators and realising gate receipts of 13.50 Belgian francs, STVV made steady progress becoming one of the strongest teams in the province of Limburg. They moved into the first incarnation of Stayen in 1927 but this version of their current ground was completely destroyed during bombing raids in 1944.

The club’s star player in the inter war years was Léopold “Pol” Appeltants who scored goals at a prodigious rate. Appeltants, at the age of just 16, scored 50 of STVV’s 93 goals in the 1938/39 season. St Truiden were elevated to the national second division for the first time in 1948 and Appeltants became the first St Truiden player to be capped by Belgium. He was the second divisions leading scorer in 1949/50 with 23 goals. In 20 years with St Truiden Appeltants played over 500 games for the Canaries.

After years of gradual progress, the club finally reached the top division of Belgian football for the 1958/59 season and managed to stay in the division finishing just ahead of relegated Tournai and Tilleur. The arrival of then unheralded young coach Raymond Goethals in 1959 sparked a purple patch in the clubs history culminating in 1965/66 when the Canaries finished runners up to Anderlecht to achieve their highest ever league placing. The stadium became known as “Hel van Stayen” (Hell of Stayen) as opposing teams could rarely win there.

In more recent years St.Truiden have won the Second Division in 1987, 1994, 2009 and 2015, an indication of their yo-yo existence between the top two tiers. Up until 2017 the club was owned by controversial businessman Roland Duchâtelet, who also owned Charlton Athletic until recently, and still owns Carl Zeiss Jena and Újpesti Dózsa. He sold St.Truiden to Japanese e-commerce company DMM, so home games are now attended by several hundred Japanese supporters.

Stayen was completely renovated in 2011 and now holds 14,600 spectators. It boasts a 77 room hotel, 20 of which overlook the pitch. Tonight’s game against AS Eupen would normally have cost a minimum of €20 but by sheer good luck as we queued for tickets we were offered the use for free of two VIP season tickets which, as well as padded seats, also included free food after the game! Standard VIP entry to the game was €80!

The game was one of breathless entertainment, the away side took the lead before a quite brilliant hat-trick from Ghanaian midfielder Samuel Asamoah. The spoilsport referee was less impressed, however, and when the celebrations for his third goal died down the petty official was waiting with a second yellow card as Asamoah had pulled his shirt up behind his head to reveal a message on his t-shirt underneath. 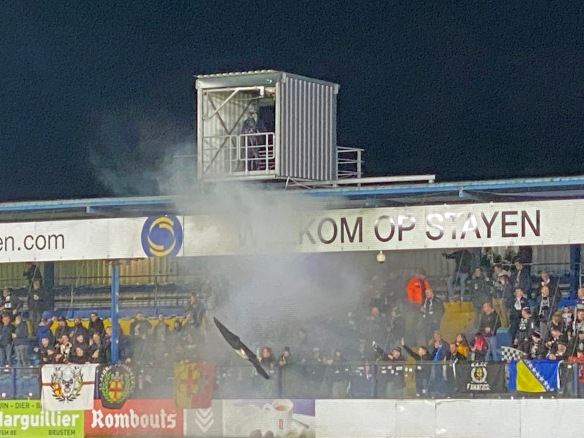 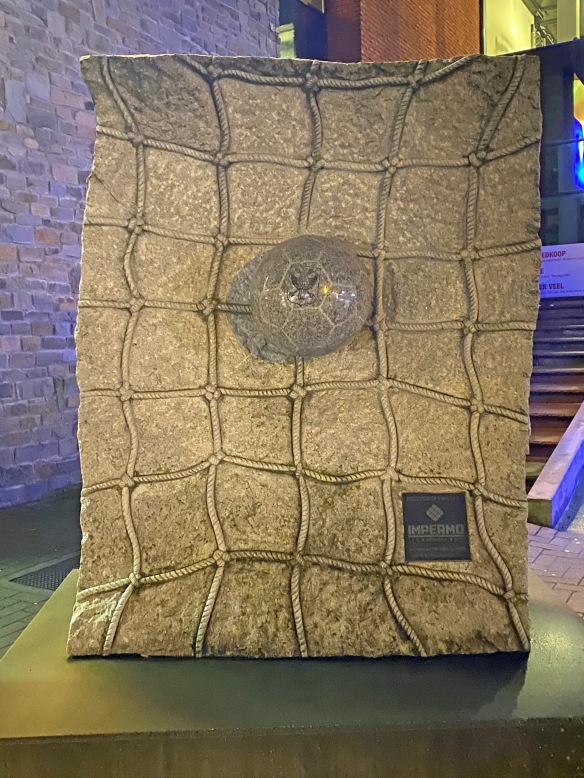