Brechin City must rank as one of Scottish Professional Football League’s more remote outposts. This small town in the sparsely populated region of Angus lies forty miles south of Aberdeen and nearly thirty miles north of Dundee. Despite it’s modest size, Brechin is an ancient cathedral city and is also one end of the famous Caledonian Railway, Montrose being its opposite end. The eleventh century Irish style round tower which now forms part of the cathedral is one of only two remaining examples in Scotland. The ancient tower has seen of a feud between the Church of Scotland and the Episcopalians and was ransacked during the Jacobite uprisings. Thankfully these days Brechin is a more sedate and quiet place but its football club are facing troubled times, rooted to the foot of the Scottish Second Division and looking odds on for a third consecutive relegation and demotion from the Scottish League.

The football club were formed in 1906 when a meeting was called in the local Temperance Hall to form a senior club to represent the town. There had been a previous attempt at senior football in the town but the original and unrelated Brechin City only lasted eight years between 1888 and 1896.

Represented at the meeting were two of Brechin’s existing junior clubs, Brechin Hearts and Brechin Harp. Together with Brechin Rovers these were the main clubs in the city at the time. Harp were particularly successful and in January 1905 an extraordinary crowd of 3,000 watched their Scottish Junior Cup fourth round match against Glasgow Parkhead. Such was the rabid interest in the match it had to be moved to Clepington Park in Dundee (now known as Tannadice Park). In a standout season for football in Brechin, both Hearts and Harp also reached the semi final of the East of Scotland Cup.

Brechin Harp were playing at Nursery Park at the time of the meeting while Hearts had moved to a new ground, Central Park, for the start of the 1905/06 season, having previously played at Viewforth Park. The motion to form a new senior club was passed with Harp throwing their lot in with the new club while Hearts decided to carry on as a junior club. The new Brechin City club would take over at Nursery Park, a field rented from the local cricket club.

The new Brechin City made an almost immediate impact winning it’s first major trophy, the Forfarshire Cup, in 1909/10 defeating Arbroath 4-1 in the final at Dens Park. The Great War interrupted Brechin’s progress, not only did they lose six players, past and present, in the hostilities their ground at Nursery Park was dug up and rendered useless by the time football resumed in 1919.

As luck would have it City secured the use of Glebe Park, previously used by Brechin Renton who had failed to revive after the War. At the time the ground had just one small portable stand which had been acquired from the Perth agricultural showground. Sited on land formerly owned by the Church of Scotland Glebe Park is wedged between the Glencadam distillery and the former East and St Columba’s Parish Church, the stunning spire of which serves as a photogenic backdrop for the main stand at Glebe Park, which has plenty of character if not age, having been opened in 1981. Floodlights had come to Glebe Park in in 1977, inaugurated against Hibernian, and upgraded four years later as the club determinedly looked to the future.

Brechin City had first been in the Scottish League for the 1923/24 season but along with many other clubs, such as Solway Star, Lochgelly United, Johnstone, Clackmannan and Galston found themselves out of the League at the end of the 1925/26 when the Third Division was axed as member clubs had struggled financially.

City were re-elected, along with fellow Angus club, Montrose, to the Scottish League Division Two in 1929 after Bathgate and Arthurlie had resigned before the end of the previous season. For their return to the League, a pavilion was erected and the Cemetery End terrace was covered. The club continued to struggle at League level and after the Second World War were placed in the C Division which also contained reserve teams.

The all time record attendance at Glebe Park came in February 1973 when Aberdeen were the visitors in the Scottish Cup. A crowd of 8,123 were shoehorned into the stadium, which putting into context is comfortably more people than the entire population of Brechin itself.

City had to wait decades for their first League championship when they finally won the Second Division in the 1982/83, season finishing a point ahead of Meadowbank Thistle. In 1989/90 they won the Second Division for a second time. They were promoted to the First Division for a third time in 1992/93 but were relegated straight away and this was followed by a second straight relegation to the new third division for 1995/96. The early 1990’s had also seen the new David H. Will stand built behind the Trinity Road which houses 1,228 seats. Aside from two floodlight pylons now attached to mobile telecommunications masts, this massive stand is Glebe Park’s sole nod modernity and compared to it’s surroundings its a little incongruous, almost like an uninvited guest at the most perfect of weddings.

In the early 2000’s Brechin had enjoyed a double promotion up to the second tier. More recently in 2016/17 City finished fourth in the now renamed Division One (third tier) but won the play offs to win a place in the Championship. Sadly the 2017/18 season was an unmitigated disaster failing to win a game all season and obtaining just four points from their 36 matches. The following season was not much better with Brechin finishing bottom of Division One and being relegated alongside Stenhousemuir.

City have struggled once again this season, securing just seven points from their opening 13 matches. Today’s visitors are Stenhousemuir who are also not setting the world on fire. It’s another tough afternoon for the Angus men as the visitors just about deserve the win on a freezing cold afternoon.

Troubles aside, Glebe Park is just simply glorious, the famous hedge running half way down the distillery side of the ground, resplendent in its autumnal ochre plumage. Then there is the sublime cranked covered terrace at the Cemetery End and the cracking main stand. Sadly it is looking increasingly likely that Brechin will finish bottom again this season and face the brutal play off against the Highland/Lowland League play off winner. It would be tragic for the Scottish League to lose this truly wonderful venue from it’s roster. There is, of course, no divine right to stay in the League, but I for one wish Brechin City the very best of luck. 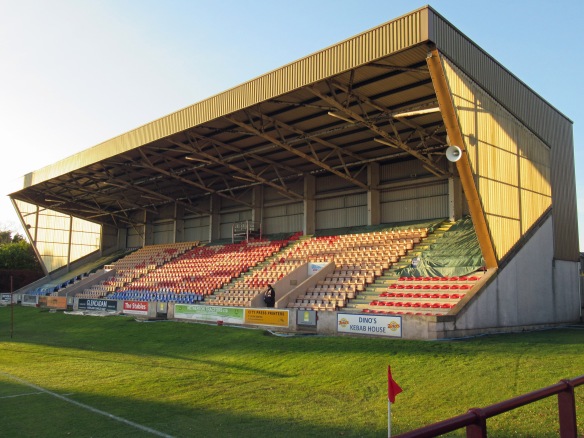 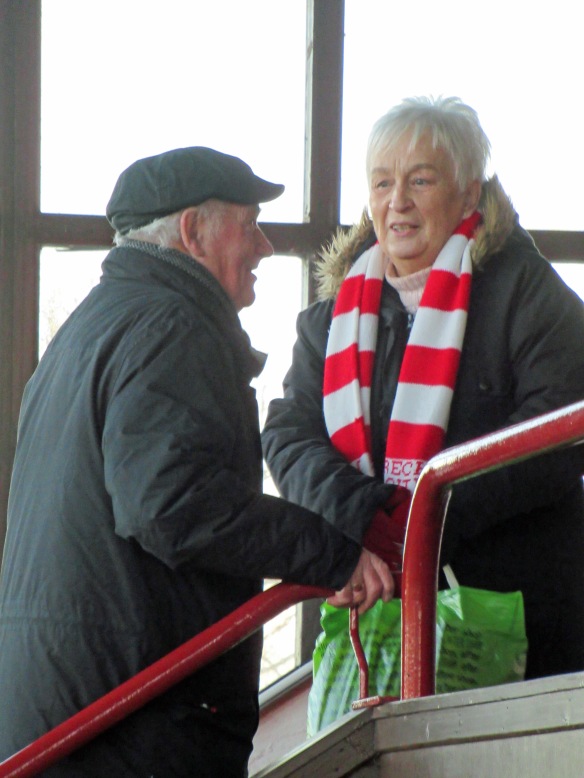 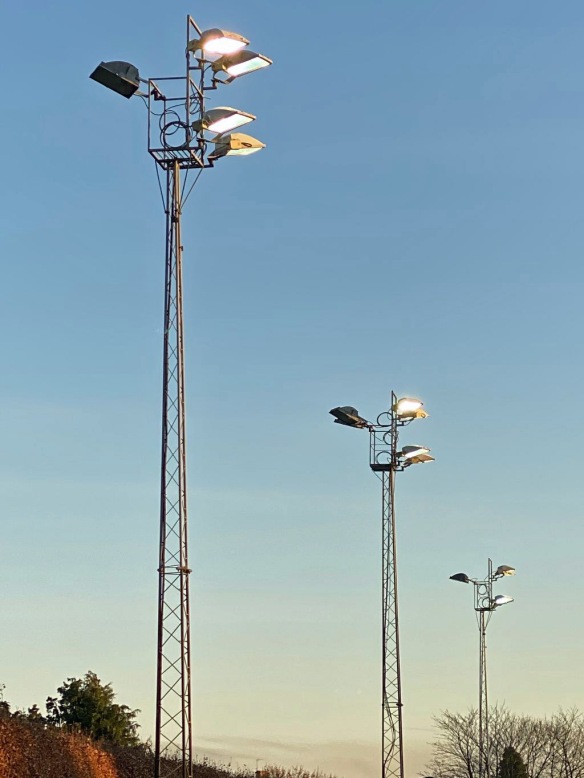 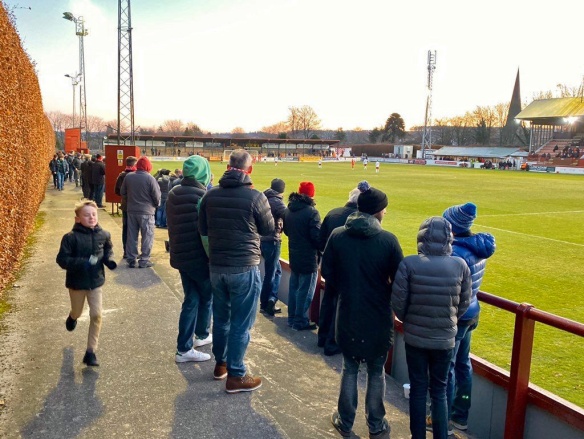 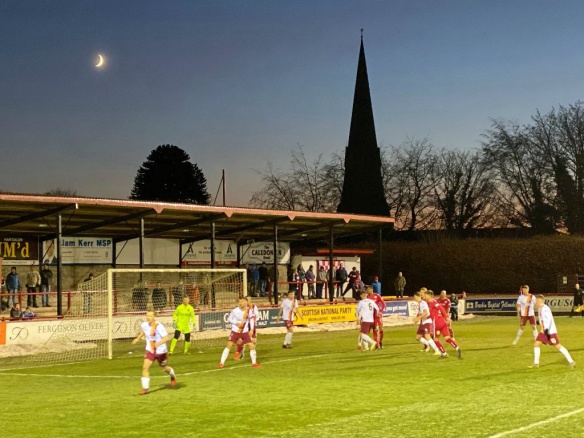