FK Železničar Beograd were formed in 1924 by a group of railway workers and moved into their current ground in 1935. The club celebrated the move by battering FK Građanski Zemun 12-0. Appropriately the ground lies wedged between railway tracks which shunt untold amounts cargo at regular intervals. Behind the pitch length stand is the mighty River Sava which in the next few years will be gentrified by a marina style project. This will mean this lovely old ground will be flooded and lost forever. The club will be relocated to a new facility else where in the city.

The club has always tended to compete at a regional level although in 1999 they were elevated to the FY Yugoslav Second League (North) for the first time. Four years later however the Serbian League was restructured and Železničar were placed in a lower league. Currently they play in the Beograd Zone Liga which sits at the fourth tier of Serbian football.

After the initial shock of several random English folk gatecrashing their boardroom, the club officials are unbelievably accommodating and friendly, gifts of pennants and drinks are most welcome. Such kindness in a strange land is really life affirming.

On the pitch the opening exchanges belie the league standings, the hosts in fourth place and their guests, FK Resnik, are second bottom with the worst goal difference in the division. The hosts struggle to create chances but then the little midfielder Stefan Tintor takes control, setting up a tap in for Bujica Radosavljević before scoring a quick fire brace himself. All three goals come in a four minute period and the visitors visibly wilt in the warmth of an early Belgrade Sunday morning. Substitute Zeljko Tovilović makes it four before Stanković bundled in a late consolation for the dejected visitors.

The real joy for us visitors was the old cyrillic scoreboard which saw a reluctant youth shin up a ladder to manually change the score at regular intervals. A real throwback to football of our youth for this band of travellers.

A wonderful club and a better sunny Sunday morning after the derby game we couldn’t wish to find. 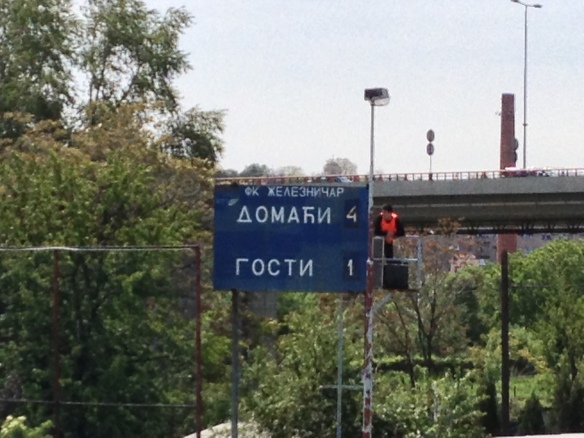