When Homburg appeared on the agenda for this trip I immediately made the association to the famous hat of the same name, sported so dashingly by Al Pacino in The Godfather. However, not untypical of Germany more than one town has the same name and the hats come from Bad Homburg in Hesse rather than this sleepy little town in deepest Saarland.

Football Club Homburg were formed in June 1908 and competed in local leagues before making a steady climb to the Regional second division. The club folded in 1936 but months later a new multi sport club, VfL Homburg, were born and football made a rapid return to the town. During World War II the Nazi party disbanded all associations including all football clubs and leagues. The club were allowed to reform as SV Homburg and were placed in the third division of the Saarland amateur championship which they duly won. At the time the Saarland region was occupied by France and, indeed, Homburg’s near neighbours 1.FC Saarbrücken played in the French Second Division at this time. Saarland was eventually returned to Germany after attempts to become part of France or their own independent state, failed. Saarland competed as its own entity at the 1952 Olympics and in qualification for the 1954 World Cup.

After Saarland returned to Germany, FC Homburg as the club was now known, competed in the Saarland Amateur leagues before climbing up to the 2.Bundesliga. Incredibly they won this league in 1985/86 and ascended to the top tier for the first time in their history. After a two season stay the club were relegated but made an immediate return to 1. Bundesliga when they finished runners up to Fortuna Düsseldorf. Aside from beating Bayern München in the DFB Pokal in 1991 that was the zenith of Homburg’s golden era.

Financial trouble lead to a steep decline and by 1999 Homburg had been refused a licence for Regionalliga football and were demoted to the Oberliga Süd-West. Ups and downs between the fourth and fifth tiers have marked the clubs recent history with their latest ascent to the Regionalliga coming after an Oberliga title win in 2011/12.

Homburg play at the photogenic Waldstadion which boasts a capacity of nearly 22,000. The ground was opened in August 1937 when Jahn Regensburg were the inaugural visitors. The council had engaged architect Willy Schwilling from Ludwigshafen to design a suitable arena for the newly formed VfL Homburg. The old disbanded FC Homburg had previously played on a modest ground at Schlossberg. In its heyday the Waldstadion boasted a 38,000 capacity but an extension to the grandstand in 1990 saw this reduced to the present capacity but providing far more seats than the original stand. The renovations included the current floodlighting system which looked glorious sited in front of tall autumnal leaved trees.

Having been to Hennef 05 last season, another club promoted from an Oberliga, it would appear there is a yawning gap in playing standards between levels four and five in Germany. Tonight’s visitors, Saar 05 Saarbrücken were promoted from the Rheinland-Pfalz/Saar Oberliga last season but have struggled at the higher level, accruing just two points and losing all eight away games so far. They had one chance on this game, a whipped in corner saw a header smack the Homburg crossbar, the visitors wilted after this as if they knew they would not muster anymore chances in the game. In the first half Homburg were awarded a soft penalty when a powerful shot hit a defenders arm and the referee decreed it was a deliberate handball. Kai Hesse dispatched the spot kick with customary teutonic aplomb. After Saar’s solitary goal attempt the hosts duly wrapped up the points when Thierry Steimetz scored a really well taken goal.

Just before the end the stadium announcer declared the crowd to be 1,118 which was greeted with howls of derision by the home fans, there were clearly significantly less than that there tonight on a rainy night in the Waldstadion.

As we slunk out of the ground and into the dark of the night the rain continued. Sure could have done with one of those hats. 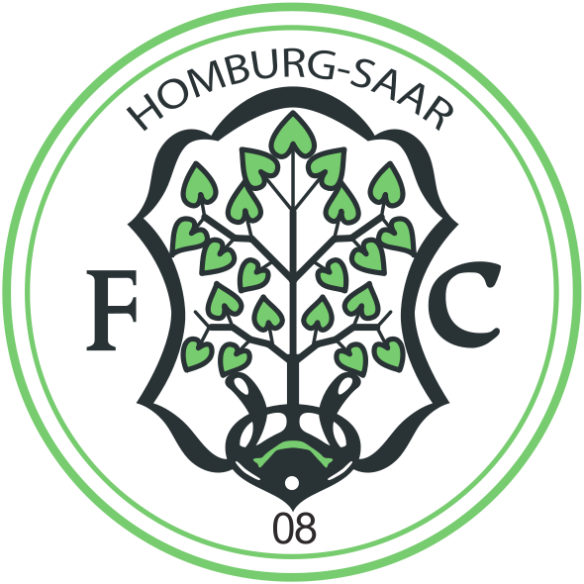 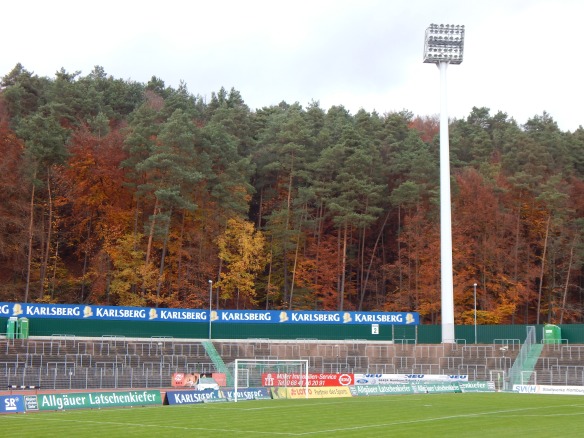 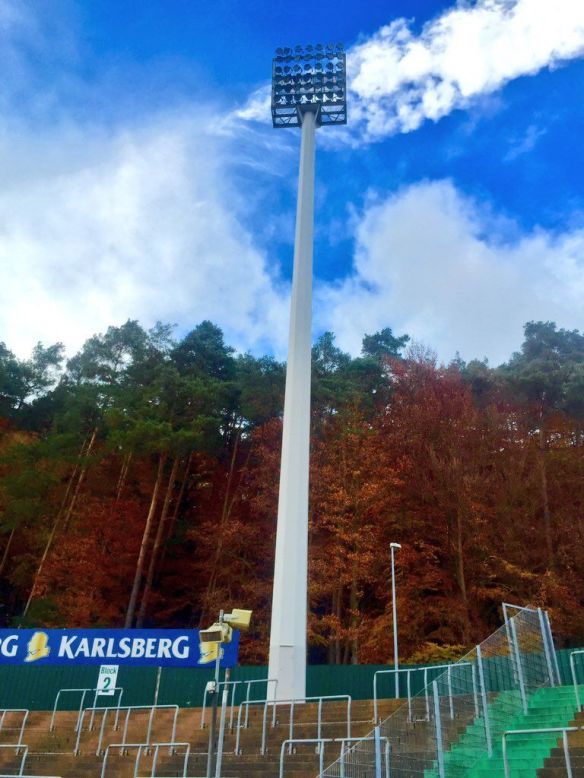 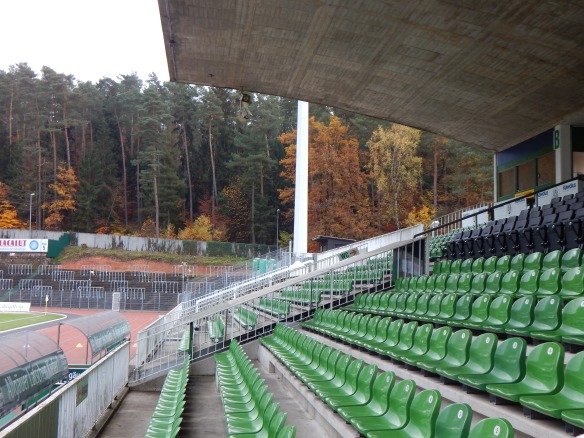 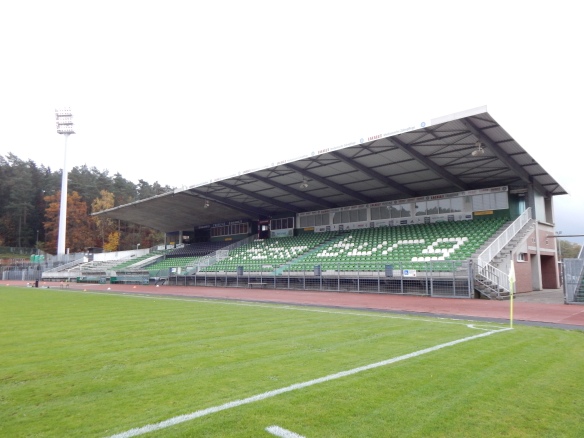 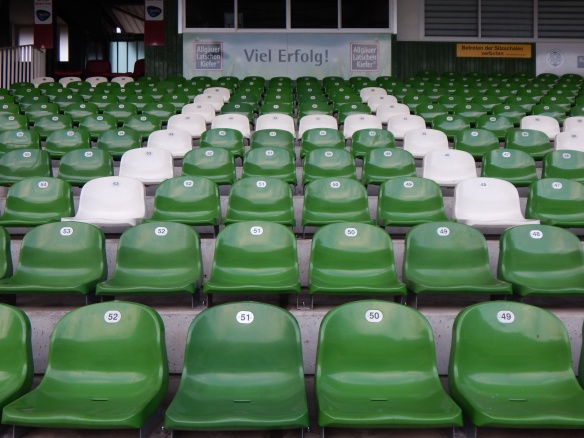 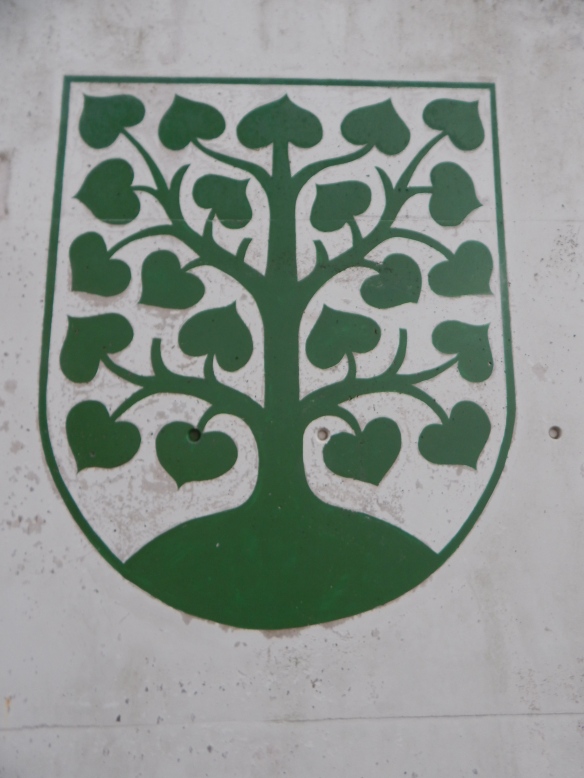 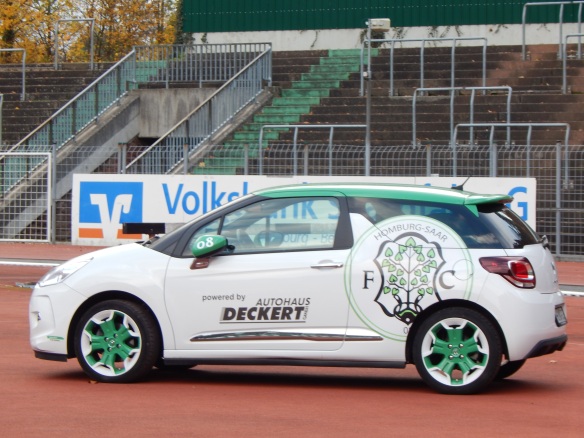 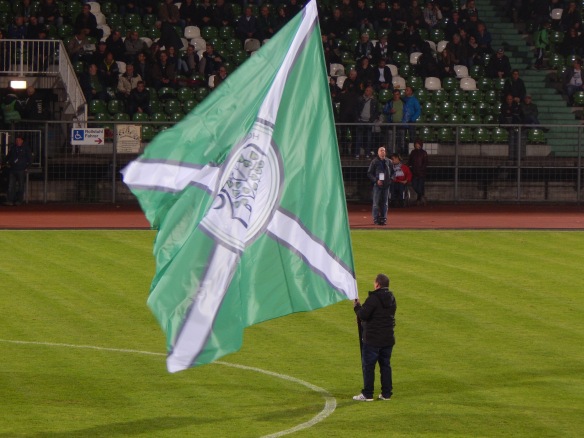 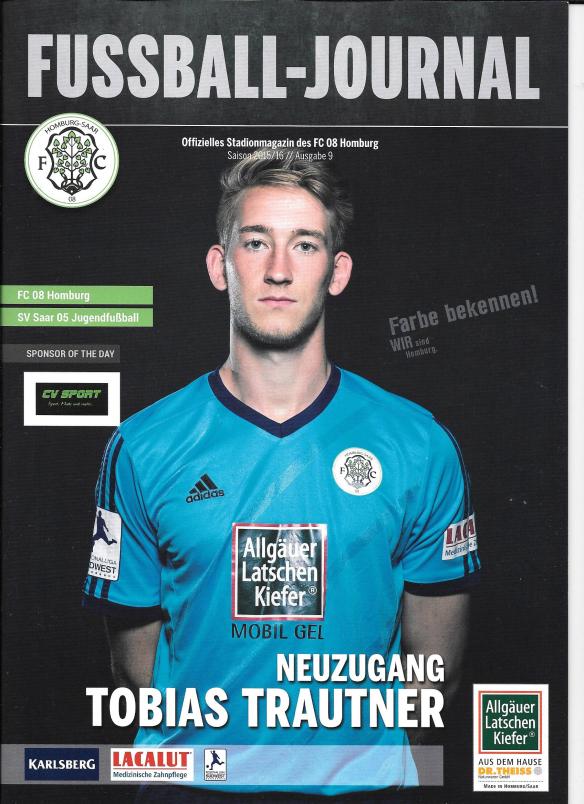 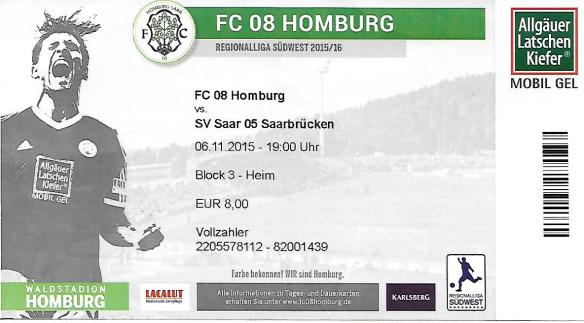 1.FC Saarbrücken have a truly fascinating history in particular relating to the Second World War and the annexing of Saarland from the rest of Germany. The club were founded on the 18th April 1903 as the football wing of Turnverein 1876 Malstatt. The club splintered away from the parent club in 1907, and rebranded two years later as FV Malstatt-Burbach.

The club played in various Bezirkligas and Kreisligas up until 1935 when the Third Reich reorganised German football into sixteen regionalised Gauligas. The club were initially placed in the Gauliga Südwest and then moved across to the Gauliga Westmark. They won this league in 1940 and 1943 and it was in the latter year they made it to the final of the play-off system but lost 3-0 to Dresdener SC. This effectively meant they were national runners up for the German championship.

As the war intensified the club could only continue fielding a side by temporarily merging with SC Altenkessel. The conclusion of the war saw Saarland, still under French occupancy, annexed from the rest of Germany. The club were allowed to reform, under their present name, and spent three seasons in the Oberliga Südwest-Nord. Under French occupancy there were attempts to get Saarland recognised as an autonomous state and, indeed, Saarland entered the qualification for the 1952 Olympics and the 1954 World Cup as their own entity. 1. FC Saarbrücken were ejected from German football in 1948 and briefly played in a hastily arranged competition called the Ehrenliga but rather than play in what was deemed as a “puppet” league, the club decided to join the French Football League having registered their name as FC Sarrebruck. The club were placed in the second tier and promptly won the championship, six points clear of Girondins de Bordeaux. The French Football Association denied them promotion and the belief was they did not want to risk a Germanic side potentially being crowned French champions. The club left the French league and played friendlies and tournaments for a few season before being readmitted to the German federation in 1952. In February 1951 one of these friendlies saw Saarbrücken take on the mighty Real Madrid who were only a few years away from five straight European Cup wins. The hosts won 4-0 with the Madridstas blaming the cold weather for the humbling defeat. The state of Saarland itself carried on producing its own postage stamps and coinage, the Saar franc, until July 1959 when the “Kleine Wiedervereinignung” (the small reunification) saw the demise of the Saarland Protectorate and full reintegration into West Germany.

The club remained a strong force winning the Oberliga Südwest in 1952 and 1961 before the Bundesliga was formed in 1963. It was something of a surprise however that Saarbrücken were elected to the new competition as other clubs in the area such as Neunkirchen and Wormatia Worms were considered to have better playing history. Since those momentous times the club has been only sporadically successful and in 1995 a financial crisis saw them forcibly relegated to the third tier. For the 2007/08 season the club had sunk to the fourth tier but then enjoyed two straight promotions to take their place in the 3. Liga, a new third tier of the Bundesliga formed that had been formed in 2008. The club remained at this level until last season when a disastrous campaign saw them finish bottom of the table having hired four coaches during the season!

The club has played at the Ludwigsparkstadion since it opened in August 1953, defeating Rot-Weiss Essen 3-1 in the opening game. Apart from some modest renovations in 2000 the huge bowl like stadium has changed little in the intervening years. This fantastic old stadium also plays hosts to the American football team, the Saarland Hurricanes. In March 1954 with the fervour for Saarland’s independence at its peek, the fledgling nation were paired against West Germany for a qualifying match for the 1954 World Cup. Unsurprisingly Saarland lost 3-1 but the Ludwigsparkstadion held 53,000 for that fixture. Its modern day capacity of 35,303 only provides seating for a shade over 8,000 so ample terracing survives although in recent years there have been rumblings of building a new arena style stadium within the bowl itself much in the way the old Zentralstadion was modernised in Leipzig. However any feasible plans have yet to materialise and should be contextualised in that as long ago as 1998 then club president, Reinhard Klimmt, described his own stadium as a “hovel”.

Prior to playing at the Ludwigsparkstadion the club had a somewhat nomadic existence particularly in their formative years. Initially they played on a school field before using grounds called Rotplatz and Am Wallenbaum. These venues were only short term solutions as they were both hemmed in by and subsequently lost to residential housing. In September 1910 they moved to a better facility called the Terrain an der Lebacher Straße. However, after the First World War another move was needed and the Sportplatz Ludwigspark became home until 1953, although many post World War II matches were staged at the Stadion Kieselhumes which is home to Oberliga side, FC Saar 05 Saarbrücken.

This evening’s game saw Saarbrücken take on Kickers Offenbach in a fourth tier match in the Regionalliga Südwest. It is a very evenly matched contest and many chances are squandered. A header from centre back Daniel Döringer gives the hosts the lead which lasts until eight minutes from time. The visitors substitute Steven Von den Burg scored with virtually his first touch. It’s a deserved equaliser and the bosterious pyrotechnic wielding Offenbach fans celebrate a point shared in this great old stadium. 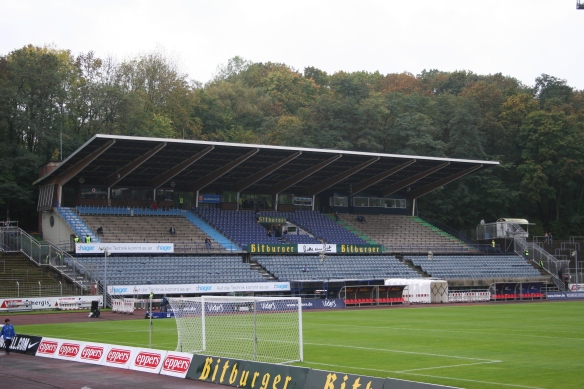 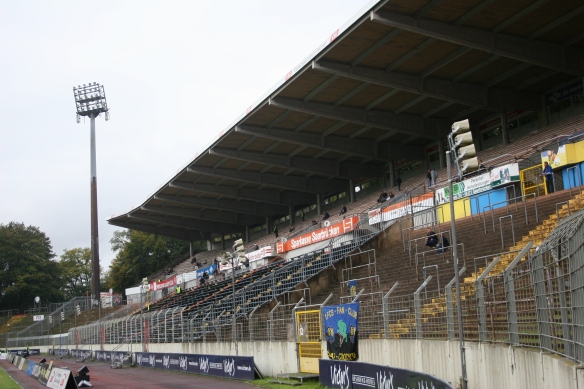 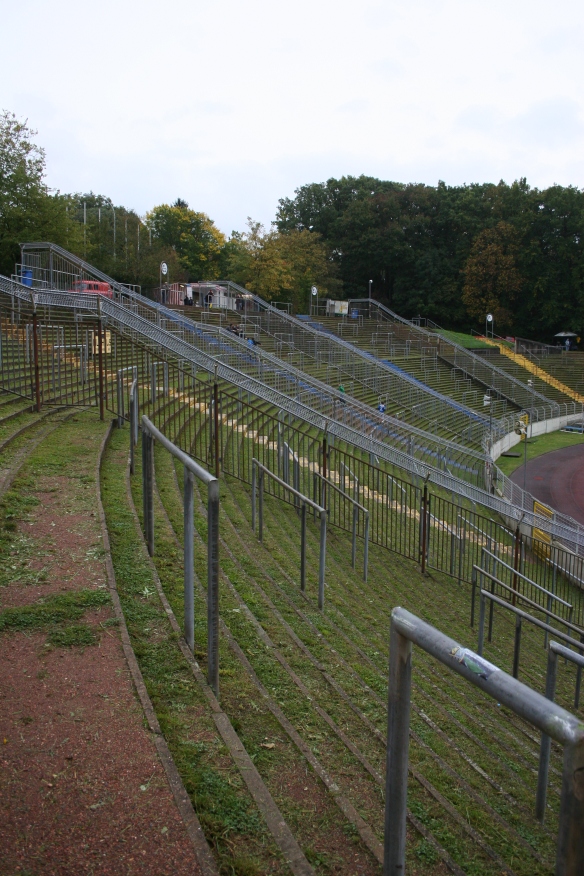 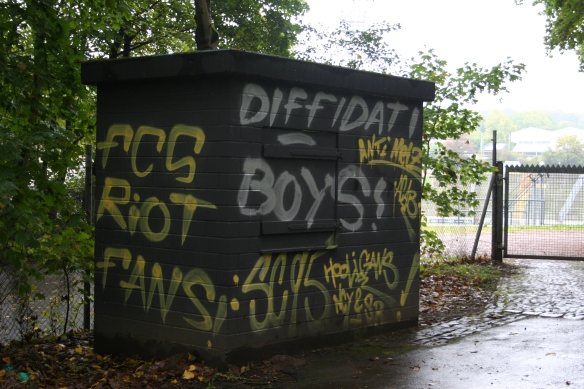 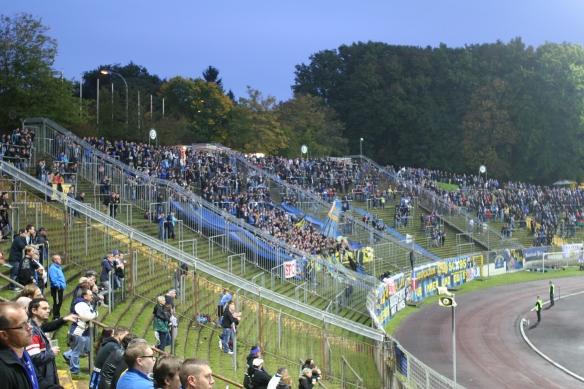 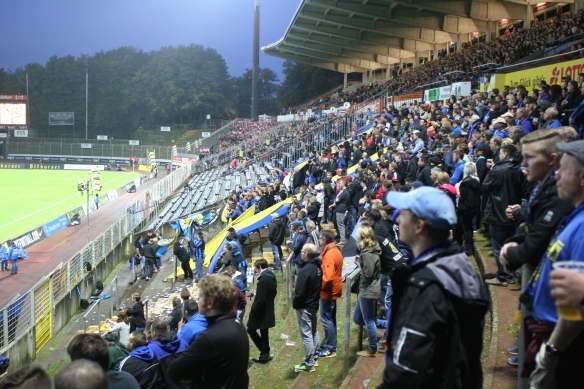 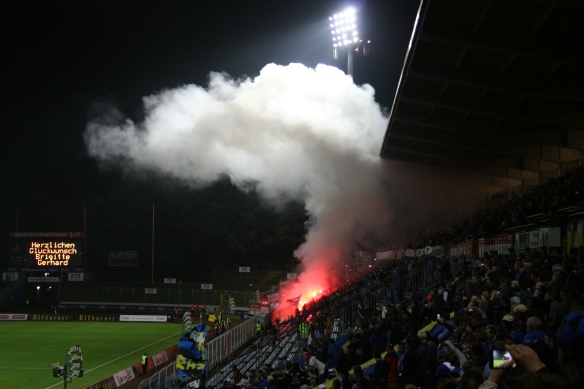 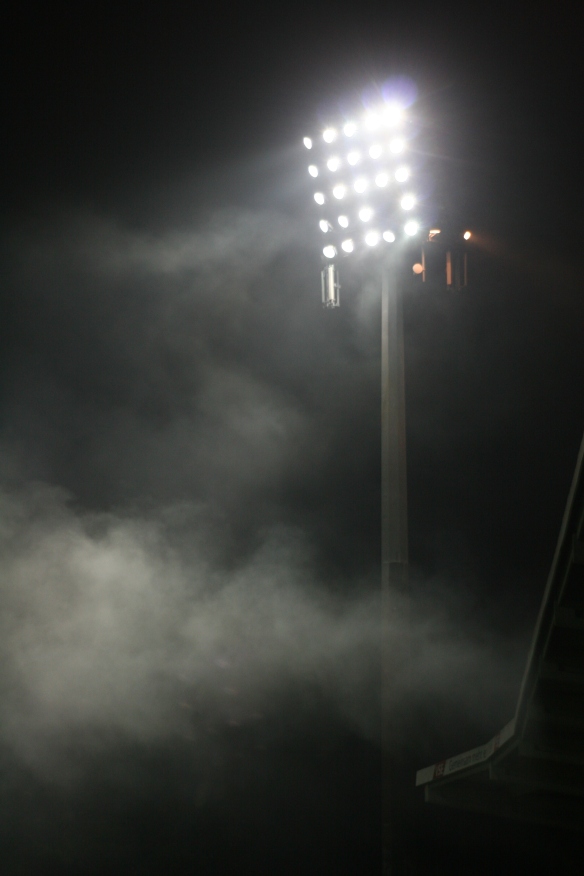 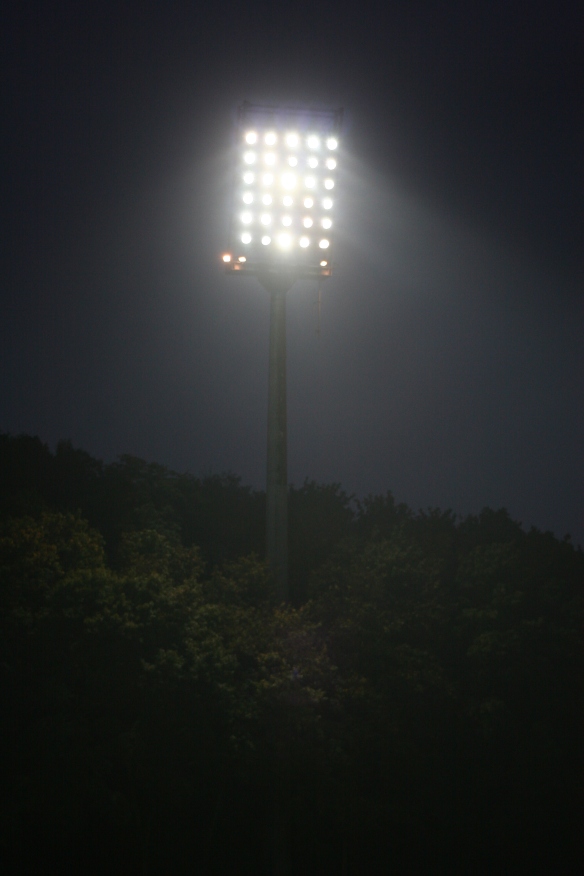 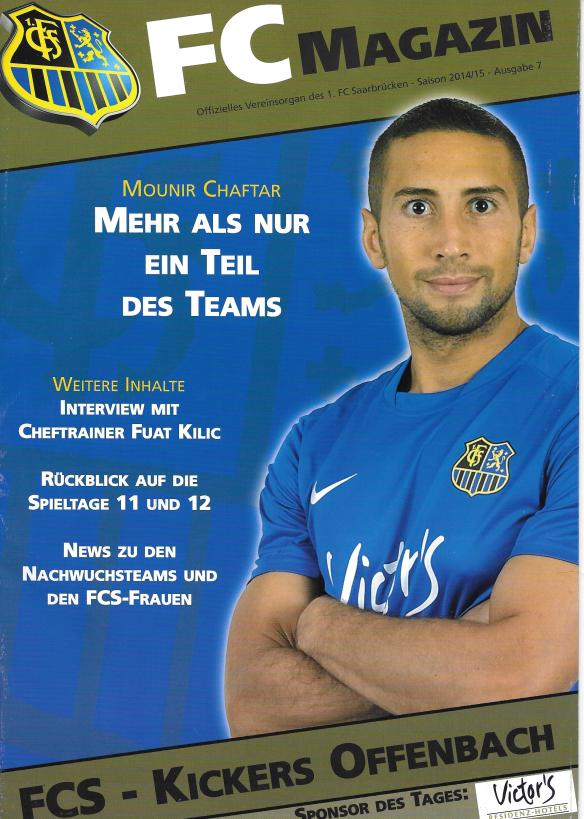 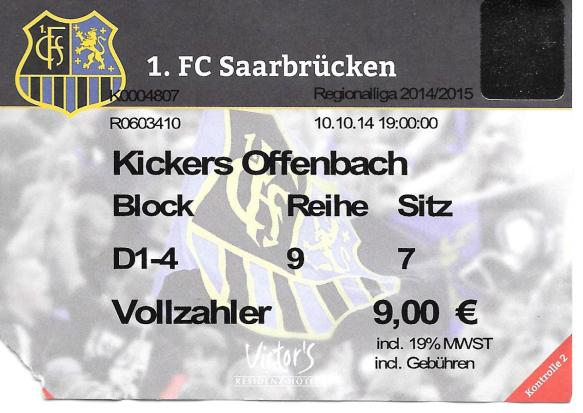