Following last years pioneering Groudhop to Belgrade a second one was arranged for the first weekend of April 2017 with no less than 45 groundhoppers attending.

The first match on the agenda was the match between Dinamo Vranje and ČSK Celarevo Pivara. Vranje is a city in the Pčinja district of Southern Serbia, just 25 miles from the border with Macedonia and 40 miles from Bulgaria. The club were formed in 1947 and have spent much of their recent history in between the second and third tiers of Serb football. However, as recently as 2013/14 they were in the fourth tier but after two straight promotions they have returned to the Prva Liga. Dinamo play at the Yumco Stadion, Yumco have their HQ next door to the stadium and produce the uniforms for the Serbian military.

The stadium is a quirky two sided affair with separate entrances for both sides meaning you had to leave the stadium and walk round the perimeter to gain access to the open terrace on the far side. What set the ground apart was its location beneath the triple peaks of the Pljačkovica, Krstilovice and Pržar mountains, as initially the sun shone it really was a most beautiful vista.

The footballing offering for Saturday morning was restricted to under 19 matches in the Omladinska Liga. We opted for the game between second placed FK Partizan and league leaders FK Brodarac. They play at the Sports Centre Partizan-Teleoptik in Zemun which is also known as as “Zemunelo”. As well as being Partizan’s training ground it is the home ground of FK Teleoptik who currently lead the third tier Srpska Liga Beograd Zona.

A healthy crowd of almost 400 gather to watch a scintillating performance from Brodarac who win comfortably by four goals to one. Among the crowd was former PSV, Chelsea and Atlético Madrid striker Mateja Kežman who was very friendly and seemed happy to sign autographs and pose for photos. 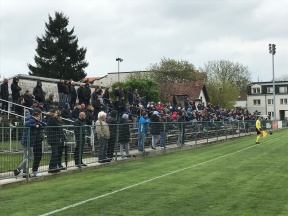 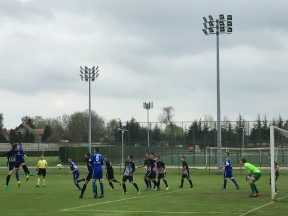 The early evening game saw a trip to Stadion Partizan for the match against southern Serbian club Radnik Surdulica. Tension in and around the stadium, despite the modest crowd, was palpable with Red Star ultras apparently trying to steal Partizan flags. The mood wasn’t helped by Radnik taking an unexpected lead early on.

The second half thankfully was less worrying and Partizan almost inevitably came back to win 2-1 thanks to the awarding of a very soft penalty.
Partizan and Red Star have been at loggerheads since both were formed in 1945 after all pre War clubs were formally dissolved. Red Star have won 27 National championships to Partizan’s 26 so you can imagine the intense rivalry between the two on derby day. The Večiti derbi, the Eternal Derby,really is one of Europe’s greatest footballing experiences.

On Sunday we could have stayed in Belgrade for the easy option of Grafičar but instead we decided on the derby of Mladenovac! Upon entering the ground of FK Selo Mladenovac you see an old railway carriage which is used as a refreshments bar! On the far side is a pitch length uncovered terrace whose concrete steps have been almost subsumed by weeds and wild flowers. Behind the terrace is the eye catching feature of a disuse mill tower. Behind the dressing rooms is the disused factory of Petar Drapšin which manufactured tanks for the old Eastern bloc countries.

Again the club are most welcoming and insist we don’t pay to get in. The hosts need to defeat OFK Mladenovac to remain in the division and a spirited comeback in the second sees them grab the points with a 4-2 triumph.

We headed back to Belgrade for the highly anticipated match between FK Rad and Red Star. We had reserved tickets in the “neutral” sector were charged 700 Serb dinar (£5) instead of the normal 400 dinar. To our surprise the ground was not even half full and our tickets had 400 RSD written on them. The club had charged us 300 dinar per ticket for “reservation” for a game that we could have just walked up to and paid to get in. The poor experience with Rad was compounded by the searches conducted at the gates which saw all manner of items confiscated, the strangest being a packet of mints!

On the pitch zvezda eased to a 4-0 win helped by the referee failing to give Rad a clear penalty with the score at 0-1. The Rad ultras were housed in a section of uncovered terracing behind the goal and had just returned after their racist chanting had seen the club forced to play the previous three home games behind closed doors. Save for the odd bout of vigorous flag waving and a blue smoke bomb the ultras of Rad appeared to be on their best behaviour.

With a few of the hoppers staying till Tuesday a bonus opportunity of the Prva Liga match between FK Proleter and FK Indija appeared from the fixture gods. We headed north to the stunning city of Novi Sad in good time for the 15.30pm start.

Arriving unannounced just before kick off at the Stadion Slana Bara (“salty pond”) the FK Proleter president insisted we would be his guests and again free entry was given as well as very welcome cold bottle of Coke or Fanta on a blisteringly hot afternoon.
Both Proleter and Indija have struggled for goals this season and prior to today’s match had both managed to score only 18 goals in twenty matches. A competitive and occasionally feisty encounter saw the hosts win 3-1 in front of 500 people with their third being an absolute peach of a free kick.

With grateful thanks to our Serbian friends Aleks Peković, Bodgan Mitrović and Teodora Rebić, Stephen Carpenter and I hope to arrange a third Serbian Groundhop in during the 2017/18 season. 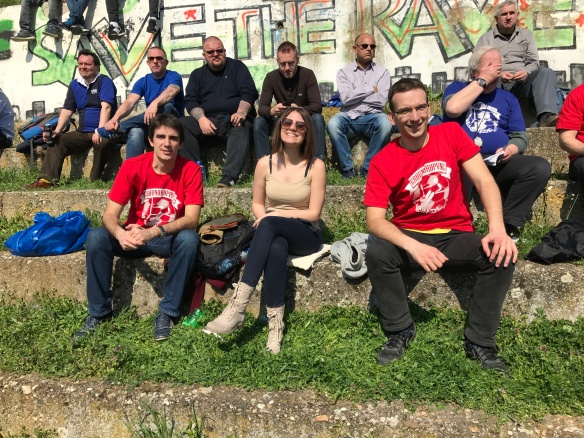 An extended review of Belgrade Groundhop 2017 will appear in the June 2017 edition of “Football Weekends” magazine. To order your copy please visit http://www.footballweekends.co.uk

FK Slavija Beograd have fallen on hard times in recent seasons and find themselves down in the fifth tier Prva Beogradska Liga (First Belgrade League). Slavija won the fourth tier Belgrade Zone league in 2010/11 gaining promotion to the Srpska League (Belgrade Region). After just one season at the third tier though the club finished in last place, 12 points adrift of safety. The rot had set and the following campaign of 2012/13 saw them relegated again.

It was fairly difficult to establish exactly where FK Slavija call home but eventually we found out that their Grupa A game was being played at the Stadion Mladi Obilić, currently home to Grupa B side Mladi Proleter (Young Proleterians). Mladi Obilić were the satellite club of FK Obilić the only club to win the Serbian Super Liga title other than Partizan or Red Star. More notoriously Obilić had been owned by the warlord and career criminal Željko Ražnatović better known as the paramilitary leader Arkan during the Balkan War. He was also the one time leader of the Red Star ultras group the Delije. He was assassinated before his trial for war crimes in January 2000. Mladi Obilić themselves folded in 2006 bought to their knees by corruption and financial problems.

The stadium has certainly seen better days. Broken seating, run down changing facilities and a truly atrocious pitch make things difficult for the two teams. What the ground does have is a strange tower at the entrance gate which has an open roof terrace room that looks out over Belgrade and beyond to the lustrous blue waters of the mighty River Danube. Its well worth scaling the stairs for a few minutes looking out over one of the cities highest points.

The game itself is low on quality, the bumpy unrolled pitch making control less than easy. Vzelats gives Slavija the lead after ten minutes and that proves to be the only goal of the opening half. The visitors, FK 13 Maj moved veteran right back Sasha Pantić up front and he promptly levelled the scores with a deft finish. Two minutes later Bustić gave 13 Maj the lead before Dragutinović restored parity for Slavija. However, it was Pantić who was to have the last word scoring his second after 66 minutes to give the points to the visitors.

Slavija were a welcoming club clearly a little down on their luck. We can only hope the struggling club can revive their flagging fortunes since they celebrated their centenary two years ago. 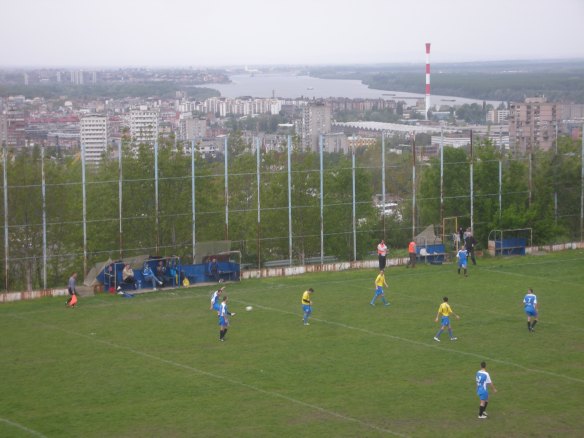 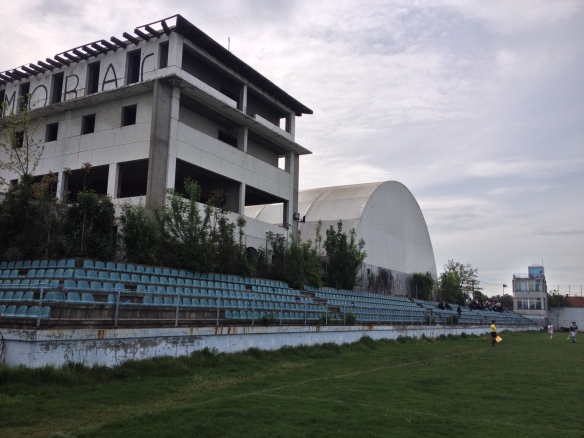 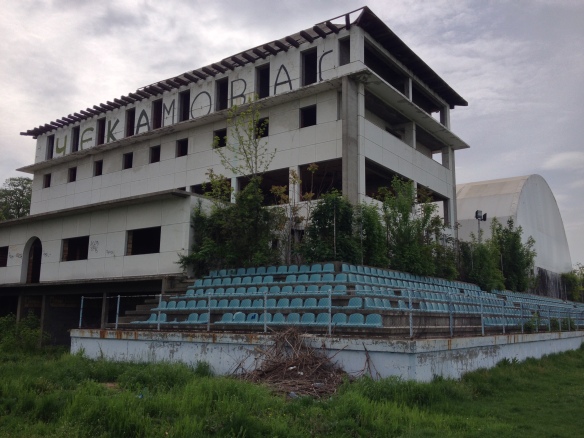 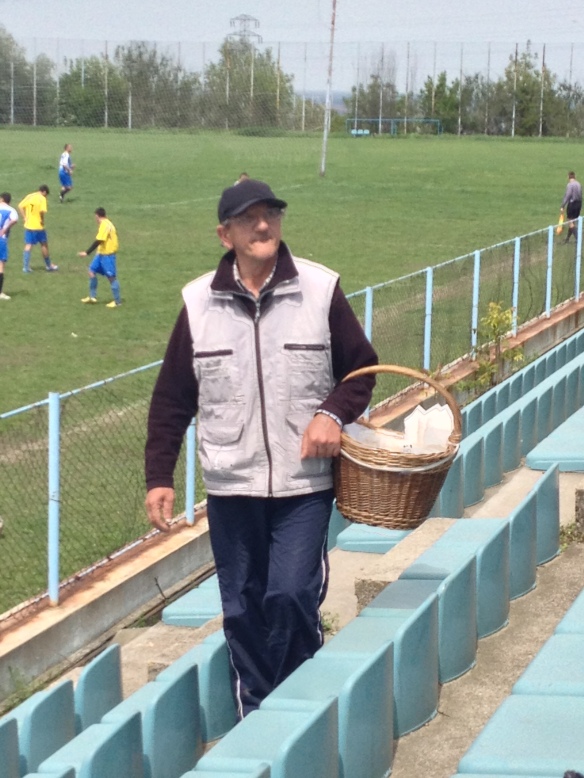 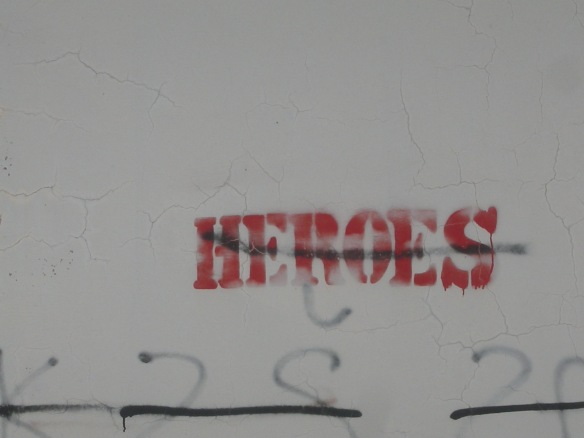 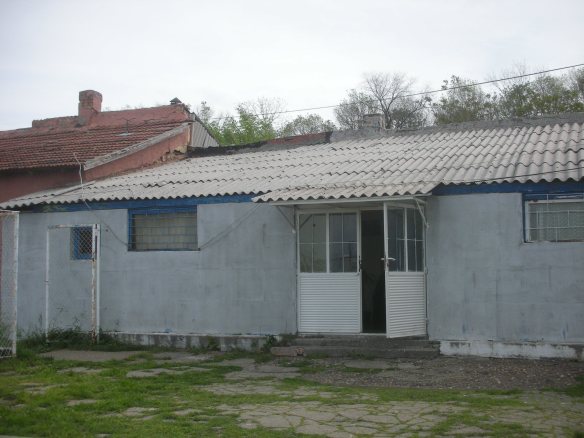 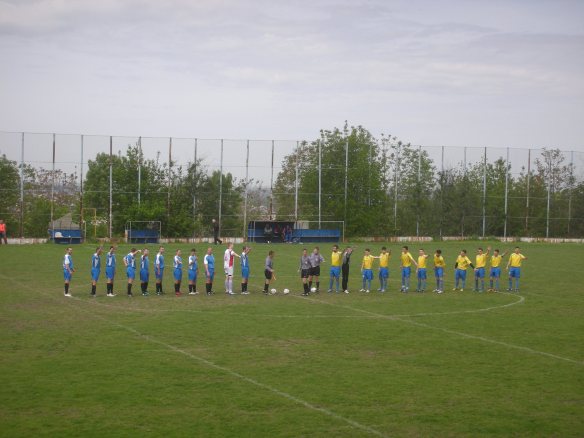 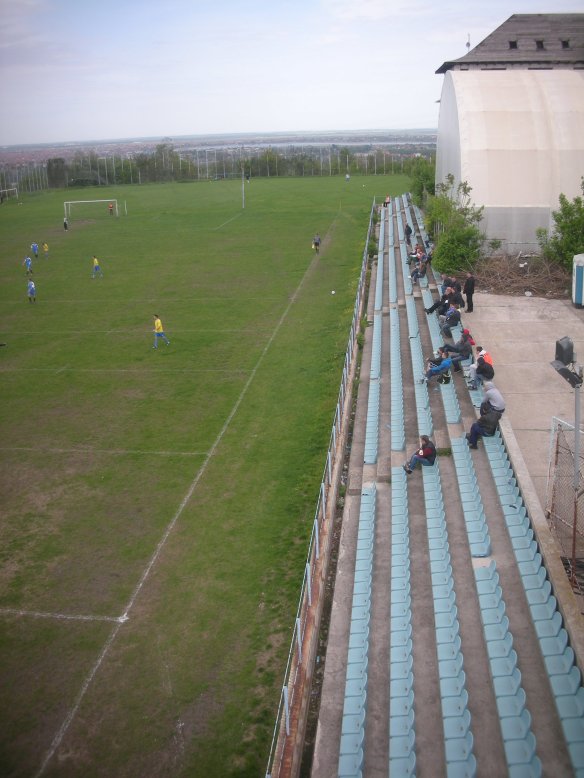