Longford Town were formed at a meeting convened in the town’s Temperance Hall in 1924. The set up kitty totalled £24 and a kit of red and black was agreed in deference to the mighty Bohemian club in Dublin. Initial games were played at Longford Park which was the prelude to a somewhat nomadic existence. The town of Longford itself is a quiet Midland town with no great pretensions. Its wonderful neo-classical Cathedral is under renovation following a devastating fire in 2009. Their derby matches with Midland rivals Athlone Town are among the fiercest in the country.

After Longford Park the club used the local greyhound stadium in Park Road until the early 1970’s before a brief stint at a ground in Water Street. The next move was to Abbeycarton which was home until 1993. During this time the club were elected to the League of Ireland in 1984. The competition expanded to two divisions the following season and the Reds found themselves relegated to the new Division One.

The club were then offered a patch of land three miles west of town on the Strokestown Road. The ground was initially called Mullogher but when it caused confusion with visiting clubs the name of Strokestown Road was adopted. Subsequently the stadium has been sponsored, a long term deal with logistics company Flancare saw locals calling the venue the “Flan Siro” for a period. It is currently known as the City Calling Stadium.

Initially the stadium had a small covered terrace adjacent to the clubhouse and a small cover at the top of the bank. Three small covered stands were then installed on the far side of the ground. It remained a modest ground until the end of the 2000/01 season when assisted by Government and FAI grants Mullogher was transformed into an all seated stadium with a big elevated grandstand. This lofty structure affords fantastic views of the rural land between Mullogher and the edge of town. Despite its relatively recent vintage the stand behind the south goal is currently cordoned off with broken seats and eroded concrete. The current capacity is just shy of 7,000.

The club’s honours lists includes two back-to-back FAI Cup wins in 2003 and 2004 defeating St.Patricks (2-0) and Waterford United (2-1) respectively. In this decade the club qualified for the UEFA Cup on three occasions but went out at the preliminary round stage on each occasion. Liteks Lovich (2001), FC Vaduz (2004) and Carmarthen Town (2005) all pitched up to this quiet part of central Ireland.

Tonight’s game is a big deal, fallen giants Shelbourne lead the table with Longford just behind but with a game in hand. The first half is a tense affair with few chances, it is halted for a little over eight minutes while a severe head injury to Adam O’Connor of Shelbourne was dealt with following a clash of heads with his own team mate, Jake Donnelly.

The second half though sees the hosts take charge, the prolific Davy O’Sullivan opened the scoring just after the hour before both sides were reduced to ten men. Ben O’Connor of Longford went for a forceful but seemingly well timed challenge before in the ensuing melee, Shels’ William McDonagh injudiciously threw a punch to earn himself an early exit. Longford’s impressive striker Gary Shaw notched the vital second before O’Sullivan sealed an emphatic win for the hosts.

Longford finished third in the First Division in 2012 and second a year later but lost the play off final to Bray Wanderers over two legs. On tonight’s imperious showing this year could well for “De Town”.

Attendance: 780 (at The City Calling Stadium) 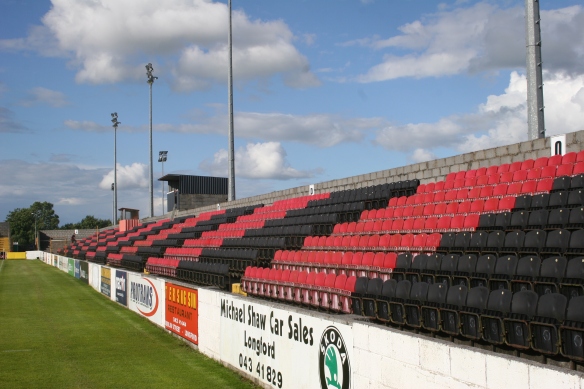 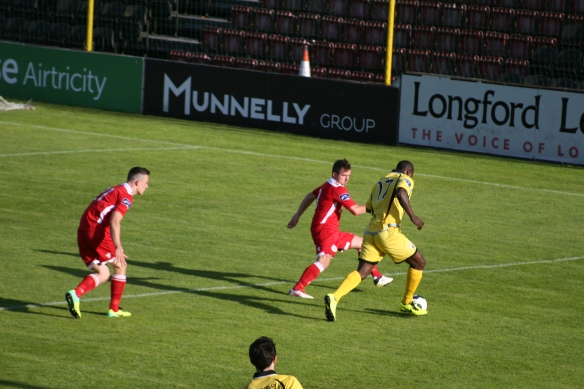