Israel really needs no introduction, a wonderful melting point with a history almost as ancient as time itself.

It’s modern skyscraper beach side city of Tel Aviv is as cosmopolitan and bustling as any major city you could care to name and features some truly outstanding Bauhaus architecture. The high rise modernity of Tel Aviv gives way almost imperceptibly to the ancient port town of Jaffa which can boast a history dating back to 1,800 BC.

Jaffa is just stunning, beautiful old buildings and stunning vistas there is a photo opportunity around every corner. The scenery is delightfully complimented with a relaxed chilled out vibe.

The first game of the weekend is at nearby Petah Tivka, their HaMoshava Stadium is not only home to the two local second division (Liga Leumit) sides, Maccabi and Hapoel, it is also hosting the games of Ligat ha’Al (Israeli Premier League) sides Hapoel Kfar Saba, Hapoel Ra’anana and Sektzia Nes Tziona. This is because these three clubs’ traditional home grounds of the Levita Stadium, Karnei Oren Memorial Field and Ness Ziona Stadium respectively, are deemed to be inadequate for top level matches. Convenient ground sharing is a way of life in Israeli football. The ha’Al league currently has 14 clubs sharing just eight stadiums between them.

HaMoshava is a two sided stadium holding 11,500 people and is a carbon copy of the stadium in Netanya, north of Tel Aviv. There is plenty of parking space, although a total absence of stewarding means it’s a real log jam to leave after the game. Tickets are available at a dedicated ticket office at one end of the stadium. For this afternoons game a ticket costs 50 shekels (£11).

It is Hapoel Kfar Saba that are the host club and their are entertaining one of Israel’s traditional football powerhouses, 13 time champions, Hapoel Tel Aviv. The visiting fans are out in force, so much so that they overfill one side of the ground so there are people standing in gangways and on stairs. Eventually they allow Hapoel Tel Aviv fans into one sector of the stand housing the home support. The away support is noisy and passionate and easily drown out the attempts of the home side’s support to make themselves heard.

It’s a hugely entertaining game with a surprisingly good pace to it. The referee has his work cut out with two Tel Aviv goals ruled out by VAR, a plethora of yellow cards, and Kfar Saba being reduced to nine men in quick succession during the first half. The first player was shown a straight red for a horrendously late tackle and moments later another player joined him in the dressing room for two yellows in the same incident, one for the foul and a second for dissent.

Given the league table the hosts took a surprise early lead but were soon pegged back by the visitors. Tel Aviv enjoyed almost total domination especially with their numerical advantage. They squandered a hatful of chances before a bleached haired substitute finally got them a decisive lead. There was still time for Tel Aviv to have the “excitement” of another goal ruled by VAR out before the referee called an end to proceedings. 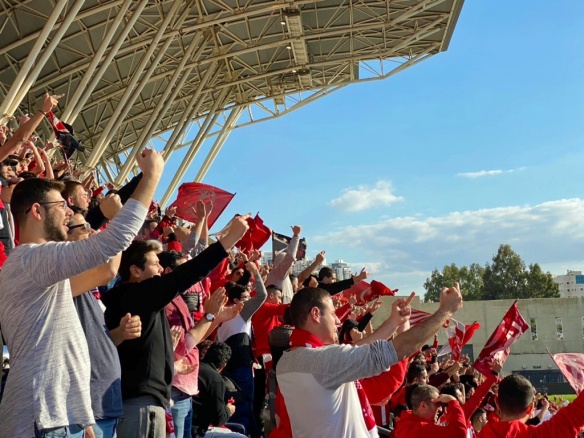 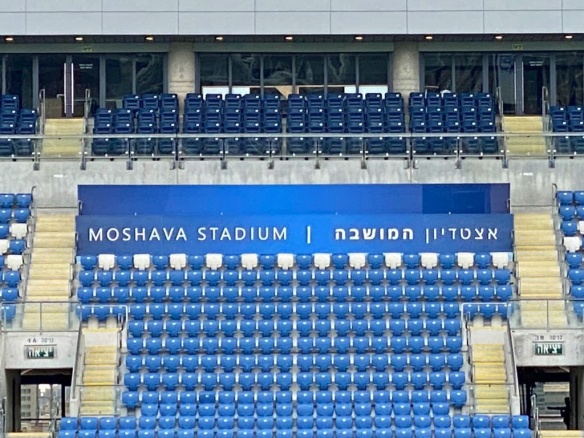 There seemed to be plenty of time to drive back to Tel Aviv in time for the 19.50pm kick off between the legendary Maccabi Tel Aviv and Ashdod. In reality, with parking not allowed near the stadium, a lot of time was spent trying to find somewhere to park which wouldn’t get you fined, clamped or towed away! Finally parked up in a side street it was time to locate the ticket booth and the newly rebuilt Bloomfield Stadium. The ticket office is by Gate 10 and there is a range of tickets priced from 70 to 110 shekels.

The rebuild has resulted in a much improved facility, although with only the central sections of both sides being under cover, its not a particularly great design for wet weather. That said it’s and eye-catching edifice and the two shallower ends afford nice city views from the more elevated sides. Bloomfield is shared not only between eternal rivals, Maccabi and Hapoel, a third top level club, Bnei Yehuda, also play their home games here.

Tonight it’s the reigning and 22 time champions of Israel, Maccabi Tel Aviv that are at home and the league leaders are facing mid table FC Ashdod. For those wondering why so many Israeli clubs are prefixed with Maccabi and Hapoel, Hapoel tends to be used by clubs of the “workers” aligned to the Histadrut Labor Federation, while Maccabi clubs traditionally draw support from various Zionist sports clubs. The Maccabees was originally a Jewish liberation movement, and Maccabi Sports Clubs were originally formed for Jews who had been banned from joining other sports clubs.

It’s a much poorer game than this afternoon’s effort, with Ashdod offering very little in the way of attacking prowess. Maccabi lead at half time and the only real surprise is that it takes them until the 78th minute to register a second goal. It comes by way of a blatant penalty when Ashdod’s goalkeeper took out an attacker and then feigned a serious leg injury to try and delay the taking of the spot kick.

Maccabi’s support only half fills the Bloomfield Stadium tonight and their ultras gather at one end. Some of the younger element go bare chested down the front of the stand in scenes reminiscent of a mosh pit at a thrash metal concert, there was even crowd surfing at one point! 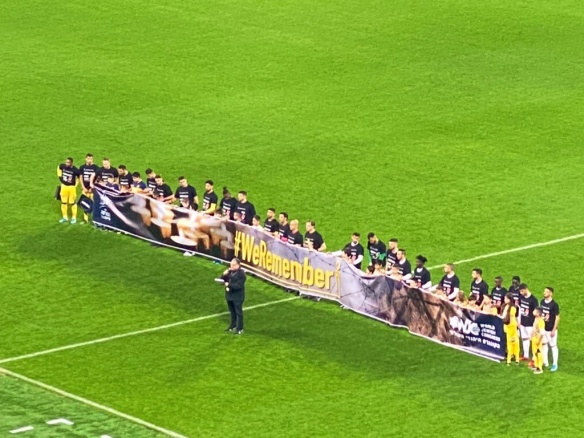 Many football fans will either have seen or at least know about Maya Zinshtein’s incendiary 2017 documentary “Forever Pure” about Beitar Jerusalem’s fans reaction to signing two muslim players from Chechnya in 2013. Beitar had already courted controversy being the only Israeli top flight club to have never signed an Arab player. “Death to all Arabs” would be sung from the stands and it was well know the club had an unofficial allegiance to the Zionist movement and the right wing political party Likud, led by Benjamin Netanyahu, a high profile Beitar supporter.

The film took its name from a banner displayed by Beitar’s ultras group “La Familia” in protest of the club signing Chechan players Zaur Sadayev and Dzhabrail Kadiyev from Terek Grozny. Despite having previously fielded Tajik, Albanian and African muslims the Chechens were subjected to concerted and abhorrent campaign of racism which saw them hounded out of the club. The film projects “La Familia” as “the most racist fans in the world”. It is harrowing viewing.

The club has been repeatedly punished for the behaviour of its fans and as recently as June 2019 La Familia issued a statement that a christian player from Niger, Ali Mohammed Al Faz should be made to change his name as “it sounds too Arab”. However, after a period of zero tolerance, Beitar announced that there had been no reported racist acts from the stands in the whole of 2019. Beitar had been formed in 1936 and was very much been regarded as a terrorist organisation in its formative years.

With all this in mind it was something of an ethical dilemma to attend Beitar’s game with rock bottom of the table Sektzia Nes Tziona in favour of a game at Maccabi Netanya. I was too intrigued with finding out whether the film had been overblown sensationalism or whether the club had genuinely fixed what was a dreadful problem for them. Although I don’t know any Hebrew, I am pleased to say I did not witness any racist chanting or any form of unnerving behaviour. What I did witness was unrelenting, passionate and noisy support for their team which was duly rewarded with a single goal victory in a pretty drab encounter.

Beitar’s Teddy Stadium is a bit of a cracker although it is still undergoing extensive renovations. It is named after Teddy Kollek, mayor of Jerusalem during its construction. Opened in 1991 it holds just shy of 32,000 people and tickets ranged between 50 and 60 shekels, the latter being in the covered upper tier. Previously the city only had one sports stadium, the YMCA Stadium, which was Beitar’s home before the move to Malha. The YMCA Stadium made way for a housing development in 2006.

The north stand has visually stunning multi coloured seats and the recent refurbishment has seen the south stand roofed for the first time to bring it in line with the rest of the arena. It is a stunning piece of architecture. As with Bloomfield, parking around the stadium is very limited.

I had hoped to take in a match in the Palestinian West Bank League and the game at the Faisal Al-Husseini International Stadium between Jabal Al Mukaber and Shabab Al Am’ari on the Saturday at 12pm seemed to fit the bill as it would allow time to get back to Tel Aviv for the Maccabi game. However, it proved problematic when the hire car company said that their cars are fitted with trackers and taking vehicles into the occupied territories is not permitted. I then found an option to get a Line 59 bus operated by Eggd from the Bar Ilan/Rabenu Gershom station in Jerusalem to Neve Ya’akov Boulevard. This would leave a ten minute walk to the stadium. At £3 each way and buses scheduled every fifteen minutes I thought I cracked it. However, the game of course was taking place slap bang in the middle of the sabbath and everything stops in Jerusalem. There would be no buses running until well after the match had finished. It would appear the only way of doing a game in the West Bank League during the sabbath is to risk uninsured driving and a potential penalty from the hire car company or pre-book an Arab driver to meet you at the border. I opted to invoke plan B and take in the game at Petah Tivka instead.

Israel is a fine country, steeped in history and offering so much to a visitor. Winter sun, great food and football, really what more would you want? 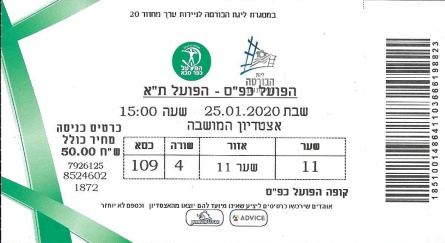 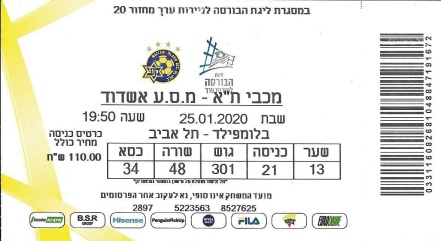 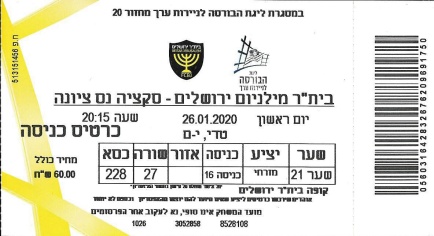