Almost a year had elapsed since the inaugural Football In Heaven tour in glorious Bucovina as we touched down in a boiling Suceava Airport. Organisers Emanuel Roșu and Ciprian Anton had once again met us at the airport with the minibus for the Suceava FA being made available to us for the whole weekend.

Zipping through the suburbs of Suceava we dumped our bags at one of our bases from last year, the Continental in Strada Mihai Viteazul. Later we arrived in the city of Paşcani on the Siret river around 15 minutes before the start of a third division match between the local side, CSM Paşcani and SCM Gloria Buzău.

What is remarkable about the CFR Stadium is that in dates from the 1920’s and some thirty years ago a decision was made to rebuild the place and work started on huge main stand supported with an impressive forest of pre-cast concrete buttresses. Not untypical in Romania, ambition outstripped finance and the huge edifice is still largely incomplete with fatiguing iron poles sticking out of unfinished walls and roof tresses. It’s a health and safety nightmare but here no-one bats an eyelid and yes nobody gets hurt. However, its Gloria who dominate proceedings on the pitch this evening as they ease to a 3-0 win.

It’s an early start in the morning as we pack up in readiness for the journey west into the Carpathian Mountains and two nights in the pretty ski resort of Vatra Dornei. However, before we take the winding ascent we have two fourth tier matches in the south west of the region.

First up is the fascinating ground of ACS Șomuzul Preuteşti who are entertaining AS Amatorii Rarău Câmpulung. While there is no stand at Șomuzul’s ground it becomes immediately apparent that spectators stand or sit on plastic chairs on a railway line that runs right next to the touchline. The hosts barely break sweat in a 3-1 win and delight their foreign visitors with a full colour programme and a meal after the game of mici (mixed meat parcels) and chips.

Before we leave Preuteşti the president of the opposition, Rarău Câmpulung, extends an open invitation to see a game at their ground in the future. We are passing the town of Câmpulung Moldovenesc on the way to our second game of the day so while the bus is refuelled it seems the obvious thing to do an have a look at their ground. It is an absolute belter with a ornate entrance giving way to a large stand set in a forested hillside. The obligatory scoreboard and a cracking press box ensure this ground will be high on the wish list for any future edition of this wonderful tour. 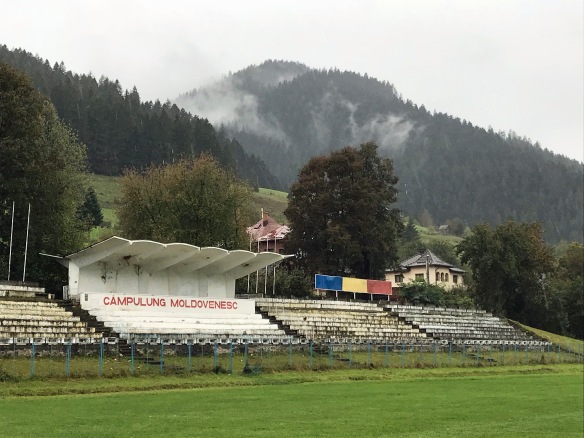 For four of us who attended the first Football In Heaven tour the second game of the day is a revisit to the stunning stadium of FC Pojorîta. Backdropped by rolling hills, shepherds huts, forested slopes and a huge church it has the first time visitors positively foaming at the mouth at its immense beauty. Pojorîta win 6-1 after their opponents, ACS Viitorul Vereşti, fade badly after a bright start. 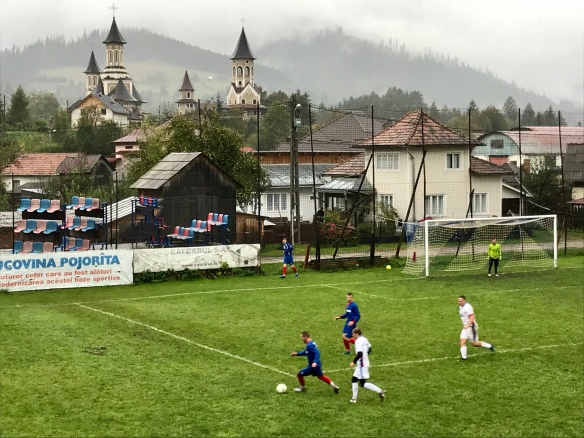 After a meal in Pojorâta nightfall was rapidly descending as we ascended into the Carpathians. We arrive at Pension di David in Vatra Dornei, a base we had also used last year.

Sunday morning saw us with some free time so we had a little surprise for the unsuspecting group. We had tried to do the Telescaun chairlift on the previous tour, but strong winds had put paid to our plan. 25 Lei (£5) gets you a return ticket and at first it seemed like it might be a fruitless exercise as the route up was engulfed in thick fog. Magically during the 25 minute accent on rickety wooden chairs, the fog lifted and upon reaching the summit of 1,268 metres (almost as lofty as Ben Nevis), we are truly blessed with uninterrupted views of snow capped peaks and Vatra Dornei looking tiny from our elevated perch. The vista is truly breathtaking, no wonder this area is known as “Heaven”.

We then head south west to the small town of Mădei which sees us cross into Neamț County from Suceava County. The local team, ACS Bradu Borca, moved from their own ground in Borca a few years ago.

We catch Bradu on a bad day as they are well and truly humped 6-1 by a decent looking Speranţa Răuceşti side on a pitch where there is gravel in the goal mouth instead of grass. A boisterous crowd of over 200 watch the game in another stunning setting.

On the way to the Borca game we had passed the ground of AS Bistriţa Broşteni and while empty it looked nothing special but it is quite wonderful how a patch of grass comes to life when players and supporters gather. There is a small dressing room big enough only for the home team, the officials change in a nearby pub and the visitors, the superbly named Forestierul Frumosu, change in their minibus.

The ground is in a clearing amongst a steep forest and is on the banks of the beautiful and fast flowing Bistriţa river. It is the river that causes the club some real problems. Footballs are lost regularly and the current is too strong and the banks too steep to retrieve them. The river has also clearly burst its banks at some point and deposited rocks onto the pitch many of which still protrude out of the penalty area at the north end of the ground. It takes brave men to play football on a pitch like this.

Broşteni take to the field in vivid pink shirts and only then do you notice the backs are sporting names like “Kelly” and “McDermott”, they are Gaelic football shirts donated by the Aireagal Chiaráin club from County Tyrone. Forestierul Frumosu aren’t without their quirks as well, their No.7 is quite the shortest player we, collectively, had ever seen. The match was very even throughout on a very difficult surface and just as it looked like Frumosu would grab a single goal victory, the hosts lash in an injury time equaliser.

Monday sees us with just one game and its a 5pm kick off back in Suceava. So after a later breakfast we leave Vatra Dornei and embark on a little sightseeing on the return journey. Firstly we take a winding climb, more than 1,500 metres above sea level, in the Rarău Mountains and alight at a purpose built viewing platform. We have come higher than the clouds with the two rift valleys below shrouded in white. It is a jaw-dropping scene. Up here the air is so pure and rarified, it enlivens the senses and revives the soul.

After retracing our path down the mountain we head for a second surprise for the group. The Bucovina region is renowned for its hand painted monasteries and there cannot me many more beautiful that the medieval monastery at Voroneţ. Built in 1488 and hand painted inside and out to commemorate the Battle of Vaslui. it is quite rightly one of UNESCO’s World Heritage sites.

We arrive back in Suceava just ahead of kick off for the fourth tier match between Liceul Program Sportiv Suceava and ACS Juniorul Suceava. The ground is a 3G pitch surrounded by steep grass banking. Communist era tenements and an attractive church known as the Biserica Sfinţii Trei Ierarhi. LPS survive some late goalmouth scrambles to win 2-1.

After a final night in the Continental hotel we wake to find the story of our football tour has made the pages of the regional newspaper, the Bucovina Obiectiv. Our wonderful hosts extend a final act of kindness to us by dropping us back to the airport for our flight back to the UK.

For more pictures from this tour and news of any future events please follow @Emishor on Twitter, join the Facebook group “Football In Heaven”, or search the hashtag #Bucovina2018 across all forms of social media.