Should you ever go to the wonderful Valeriy Lobanovskyi Dynamo stadium in Kyiv, please take a moment to look at the small steel sculpture tucked behind the ticket office. The sculpture of four men gazing into a distant horizon is a memorial to the four former Dynamo players that lost their lives in as a result of the infamous “Death Match” in 1942.

The German army had invaded Ukraine in 1941, silencing the mighty roar of the Russian guns and forcing the population into a cruel level of starvation. During the German occupation of Ukraine, football was largely banned and Soviet clubs were dissolved. Dynamo, of course, were favoured by the NKVD (People’s Commissariat for Internal Affairs), to the Nazi’s, therefore, the very embodiment of communism, and were immediately forced to disband. Many of the professional players in Kyiv joined the Red Army or the partisan resistance movement.

Charged with instilling a pacification process in the city, Lieutenant General Friedrich Georg Eberhardt suggested football matches be arranged between the local population and the occupying forces teams.

It was therefore, unwittingly, permitted that eight Dynamo players and three from Lokomotyv, who had remained in Kyiv and were now consigned to working in the Kyiv Bread Factory No.1 owned by a Dynamo supporter, could form a team called FC Start and play exhibition matches promoted as the “City of Kyiv All-Stars”.

Under the impression they were facing a team of bakers and blissfully unaware they had all been professional players, the first matches organised against Start were against a team of the Wermacht’s Hungarian and Romanian regiments. The match against the Hungarian regiment saw Start win easily by 6-2. They then defeated the Romanian regiment 11-0. It was reported that Start player Ivan Kuzmenko trained with a ball three times heavier than a standard ball so his shots were so hard the Romanian keeper would duck out of the way to prevent injury! Then a German army team were beaten 6-0.

The Germans then sent the stronger Hungarian team MSG Wal to play Start twice in a few days. Wal were beaten 5-1 and then again 3-2. The Germans by now trying to save face then sent their crack undefeated “all Ayrian” Luftwaffe side known as Flakelf to play Start, who defiantly wore red shirts, but they were humiliated 5-1. A rematch was ordered and despite commands for Start to “ease up”, the Kyiv side won yet again 5-3. Flakelf’s second and third goals had come in quick succession, after the Start goalkeeper had deliberately been knocked unconscious by some rough play by the Germans, and had pulled the score back to 3-3. He then came to his senses and Start roared back to claim yet another victory.

It was the last straw for the Germans. According to the Russian version of events, five Start players were arrested and tortured, Nikolai Korotkykh died during the torture and Olexander Tkachenko was never seen again. The other three players were sent to the labour camp at Syrets. During their internment there was an uprising against the camp’s administration and the remaining Start players Ivan Kuzmenko, Oleksey Klymenko and goalkeeper Nikolai Trusevich were singled out and executed by firing squad. Their bodies were tossed into the mass graves in the ravine at Babi Yar alongside nearly 34,000 bodies of Kyiv’s Jewish population, massacred in September 1941.

There has always been a historical dispute over the version of events surrounding the death of the Start players, the official German report into the atrocity cited the reason for the arrest of the Start players was not due to the Flakelf result at all and, indeed, the game had been played in good spirits in an unguarded stadium. According to the Germans, some days after the 5-3 game Start played another Ukrainian side, Rukh, and had soundly beaten them 8-0. Rukh’s trainer, Georgi Shvetsov, was said to be so incensed at the result that he told the Gestapo that certain Start players were working for the NKVD and it was for that reason, say the Germans, the five players were arrested.

The 5-3 match was played on August 9th 1942 at the Zenit Stadium in front of 2,000 spectators paying an entry fee of five rubles. This would have been considered prohibitively expensive at the time and was designed to deliberately keep the crowd small in case of further embarrassment to the Wermacht. They had also banned a lot of the local press from attending.

The Zenit Stadium was renamed the Start Stadium, and still stands in a very run down form in Sholudenka Street, a ten minute walk from the main train and metro station, Vokzalna. The entrance remains impressive with the name Start still proudly displayed in Cyrillic. The stadium appears to be no longer used for football, the remaining small stand is strewn with graffiti and the extensive wooden bench seating has been either vandalised or appears to be suffering from subsidence. The pitch is badly rutted and uncared for. Local children run around the wrecked turf, while parents sit smoking on the few serviceable benches left intact.

Also inside the dilapidated stadium, and notably having avoided the attention of the local vandals, is Anatoly Kharechko’s Death Match memorial sculpture. Unveiled in 1981, and cast in bronze, it depicts a naked athlete trying to kick a ball but being attacked by ungodly creatures. While the scene of this tragic episode in World War II may be crumbling into oblivion, the two memorials at both stadiums remain poignant reminders of this sombre time in Kyiv’s footballing history.

This article first appeared in the December 2019 issue of Groundtastic Magazine (No.100)

Dynamo Kyiv were formed as the Kyivan Proletarian Sport Society in May 1927 as the football wing of the existing sports and fitness club, Dynamo Sports Club. It was the favoured club of the GPU, the Soviet secret police. The first Dynamo teams were selected from chekists (members of the secret police) and the best players from the Kyiv area.

The first Soviet Championship was not competed for until 1936 and after limited initial success Dynamo became often the only tangible challenge to the hegemony of the Muscovite clubs although it took until 1961 before Dynamo won its first of 13 Soviet Championships. During the Soviet era Dynamo would also win nine Soviet cups. Since the break up of the Soviet Union, Dynamo have won a record fifteen Ukrainian League titles including a run of nine successive championships between 1992 and 2001. During the latter years of the Soviet First League Dynamo defiantly wore kit in the national colours of Ukraine.

The two stars on the Dynamo club crest represent the club’s two UEFA Cup Winners Cup successes. The first of these came in 1974-75 when Dynamo saw off CSKA Sofia, Eintracht Frankfurt, Bursaspor and PSV Eindhoven before crushing Ferencváros 3-0 in the final held at St. Jakob Stadium in Basel. Dynamo would also thrash Bayern Munich 3-0 in the European Super Cup Final.

Dynamo’s second Cup Winners Cup triumph came eleven years later in the 1985-86 season. Their route to the final saw them defeat Celtic, Bangor City, Red Star Belgrade and Bayer Uerdingen before coming up against Atlético Madrid in the final held at Lyon’s Stade de Gerland. It was another 3-0 triumph for the men from the East.

Scoring in both finals was the legendary Dynamo striker Oleg Blokhin. He won more caps (112) and scored more goals (42) than any other Soviet player. For Dynamo he scored 211 times in 432 appearances. The other name synonymous with Dynamo is Valeriy Lobanovskyi, a former player and much decorated coach during three spells at the club which were interspersed with stints as national team manager. Lobanovskyi passed away suddenly in 2002 and the Dynamo Stadium was renamed in his honour. To mark the first anniversary of his death a sculpture of the great man, sat on a trainers bench, was unveiled to the right of the magnificent entrance to this stunning stadium.

The Dynamo Stadium was built in 1934 as part of the relocation of the Soviet Ukraine capital from Kharkiv to Kyiv. It was inaugurated as the Vsevolod Balitsky Dynamo Stadium and was built on the site of the greenhouses and allotments that grew vegetables and fruit for the nearby Mariyinskyi Palace. Next to the greenhouses was a restaurant called Château de Fleur.

The original stadium was completely destroyed during the Second World War and Dynamo had to play their home games at the Nikita Khrushchev Stadium where the current NSC Olympiyskyi Stadium is sited. The Dynamo Stadium was rebuilt in 1956 and upgraded further in 1980 for use as a training venue for the Olympic Games. It was remodelled solely for football once again in 1990 with a little under 17,000 seats. Set in woodland you can walk around the top perimeter of the woods and look down on this beautiful stadium. The ornate entrance from Hrushevsky Street sets this stadium off as a truly iconic football venue. The area outside the entrance was a key area for the civil unrest of the 2013 Euromaidan revolution which let to the downfall of the Viktor Yanukovych led government.

Since 2011, Dynamo have played all their home games at the 70,000 capacity National Sports Complex Olimpiyskiy which was totally remodelled for Euro 2012. Their iconic Dynamo Stadium is a fifteen minute walk from Maidan Nezalezhnosti metro station (Line 2) and apart from Dynamo’s reserve team, Arsenal Kyiv and the exiled Olimpik Donetsk club play their home games here.

After seeing Dynamo beat Oleksandria at the Olimpiyskiy it was a quick dash over to the Dynamo Stadium for the evening game between Olimpik and Vorskla. Tickets and, unexpectedly, a small glossy programme, are available at the kiosk by the main entrance. The ticket was 50 hryvnia (£1.70) which must be one of the cheapest top flight tickets I will ever purchase! The exiled Olimpik club also have a small pop up merchandise stand on the slope up to the stadium. Only the main stand is open for the 329 people that gather for this match including some visiting fans from Poltava. Unfortunately Vorskla don’t really turn up for this game and two Olimpik goals in the middle of the second half from Teixiera and Lukyanchuk secure a comfortable “home” win for the exiles. 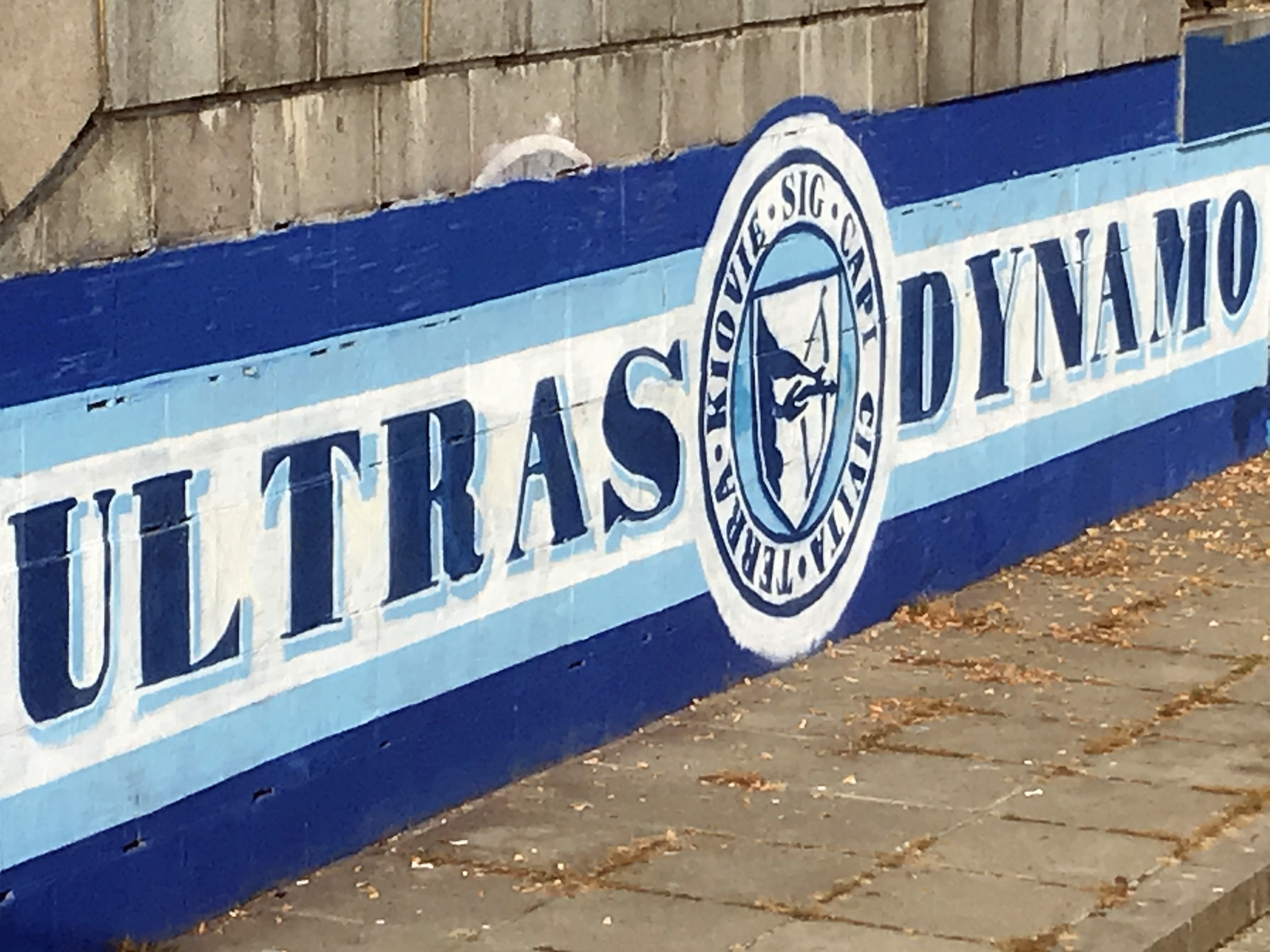 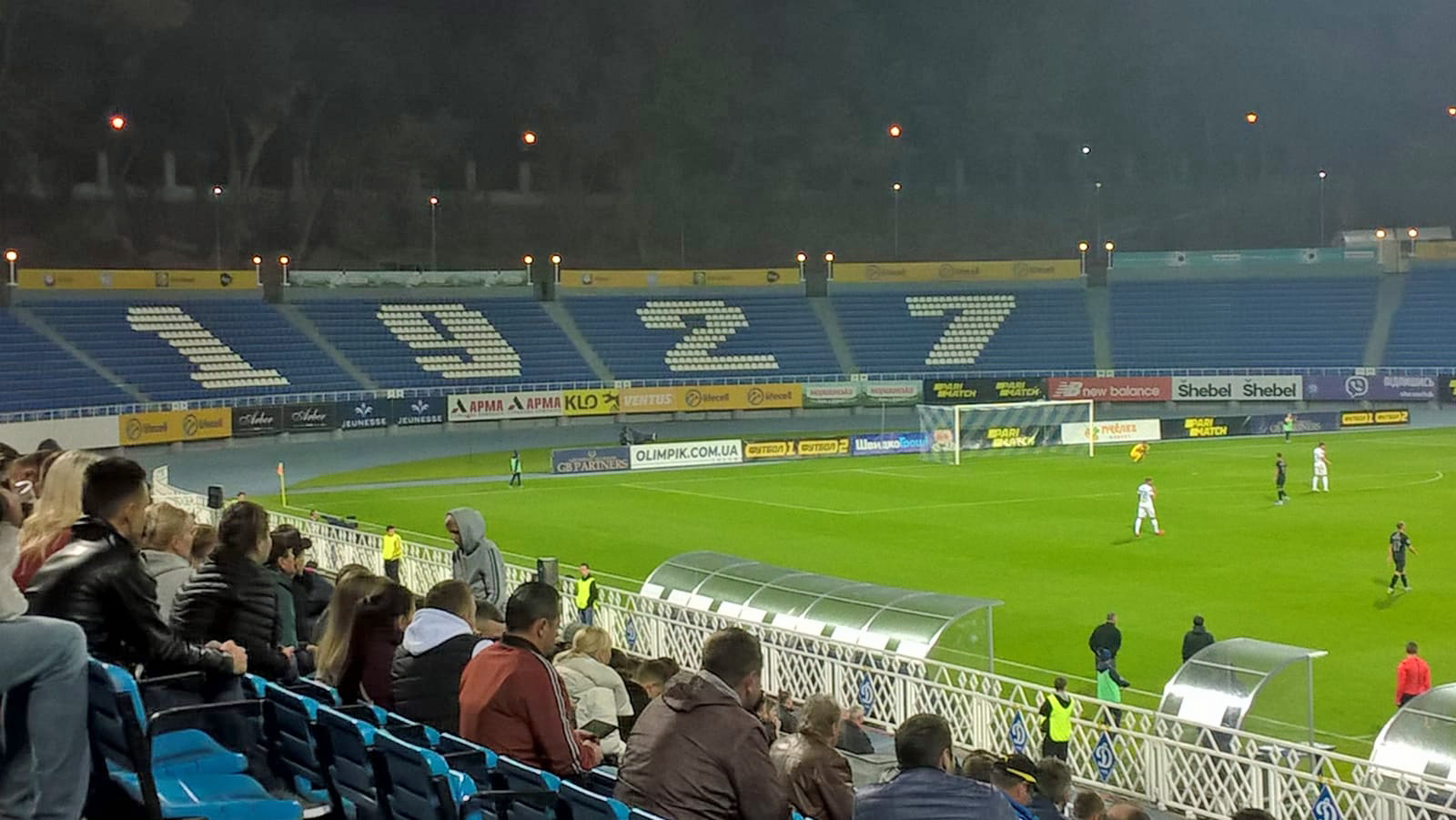 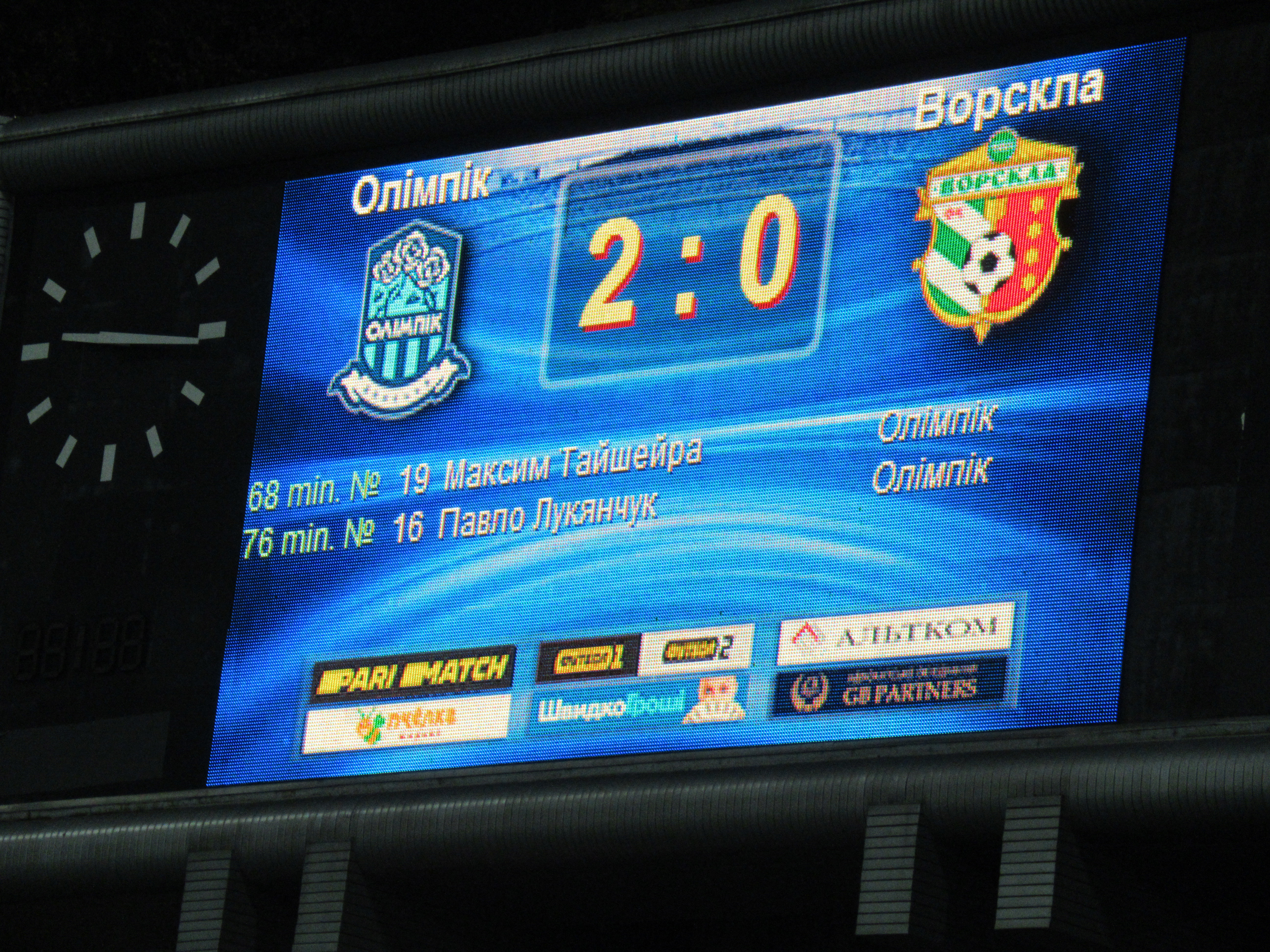 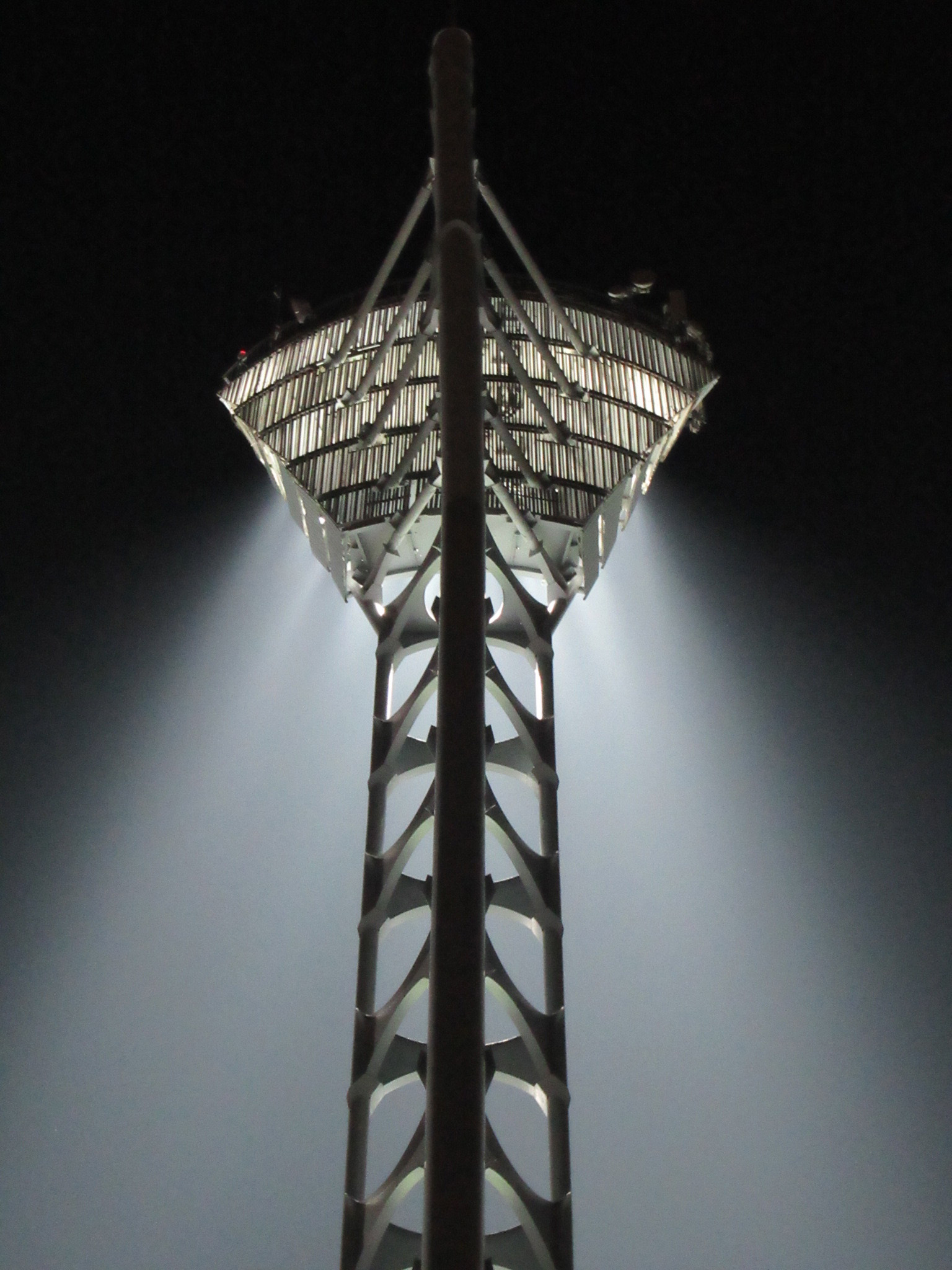