Having heard varying reports on the standards on offer in the Ceredigion (or Cardiganshire for the unwitting) League, I decided to approach my first toe dip in this particular part of the wild west of Wales with a distinctly open mind.

First up was a trip to the coast at Aberporth where the local side play on Ministry of Defence land in Parcllyn, The pitch is basic, not even roped off whilst the players change in a small block on the far side. The pitch has done well to survive the twin threat of copious recent rainfall and the presence of a natural spring behind the far goal which leaves the area behind the goal perpetually waterlogged. Spectators are fed and watered in a neat clubhouse over the road. The club do a sterling job getting proceedings underway and both sides put on a decent match in spite of an undulating pitch and a ferocious crosswind. The visitors, Crannog, go two up in the first half through Rhydian Roberts and Steff Jones and are good value for their advantage. The Aberporth manager must have earned his corn at halftime as the hosts tear into their opposition aided by the prevailing wind. Liam Griffiths pulled a goal back but with six minutes left Crannog still looked odds on for the win. A farcical own goal saw the scores levelled, and three minutes from time the visiting keeper conceded a penalty which was gleefully converted by Matt Smith for an unlikely comeback. 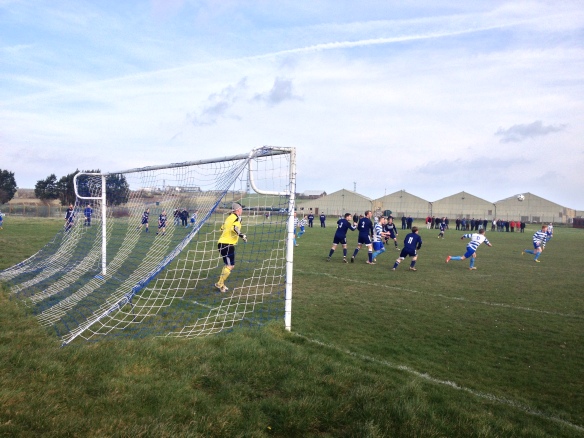 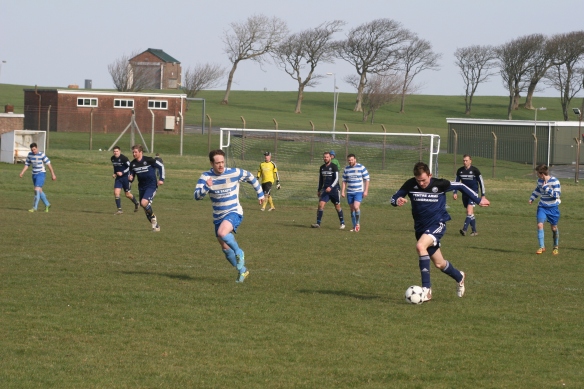 Onto Cardigan, one of the largest town’s in the area but equipped with one of the poorest facilities of the weekend. Part of the issue is the ground lies on common land and cannot be developed to any great degree. The club share facilities with their rugby playing neighbours whose ground boasts a decent sized stand. Off the field the club have everything well under control and the lamb cowl proved to be a big hit. On the field the visitors, last years Ceredigion League champions, New Quay, are mercilessly put to the sword by a rampant home team. Cardigan themselves were Division Two champions last season and look a really good attacking side, contending well with a bumpy pitch with tufts of untamed grass. The home team rattle in six unanswered goals of the highest order. 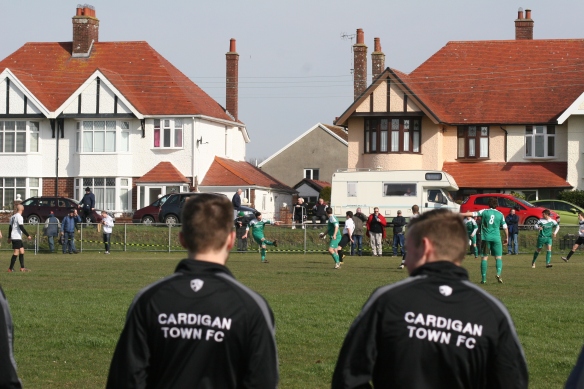 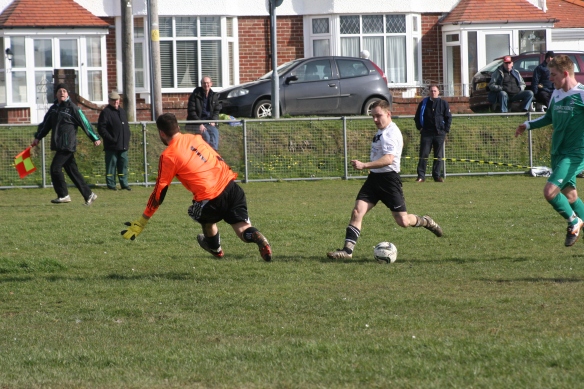 Cilgerran Rovers have a very basic ground, dressing rooms are housed in containers and there is very little in the way of spectator comfort. The club however have pulled out all the stops and the variety of food and fund raising activity provided is really top notch. Well organised and extremely friendly the club coffers took a well deserved boost from all quarters. On the field, for it is more a field than a pitch given it’s rutted and bumpy surface, the two sides bludgeon each other for ninety minutes. Skill comes someway distant to honest endeavour on the unpredictable surface. The match is decided on a very harsh penalty call in favour of the hosts, the spot kick deftly taken by Kyle Phillips. 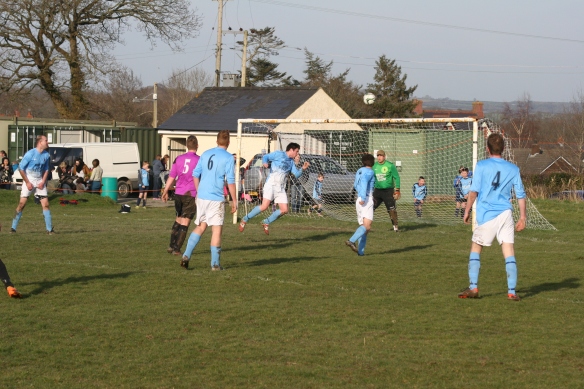 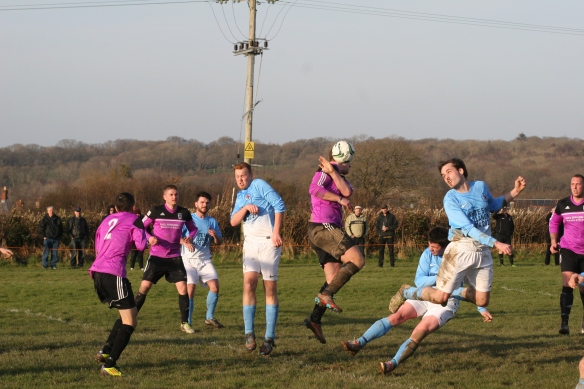 Sunday morning begins with a scenic drive to Felindre Drefach to Parc Puw, home of the local side Bargod Rangers. Taking their name from the local river, Rangers have been members of the Ceredigion League since it’s inception in 1921. Their unbroken membership has seen eight title triumphs. The ground is a public park with a neat dressing room block in one corner. The gate to this facility is festooned with a memorial to the club’s recently deceased treasurer Glan Evans and his passing is marked with a minutes silence broken only by the chatter of birds. The two sides put on a rip roaring 3-3 draw which could easily have gone either way such was the evenly matched nature of the encounter. The weekend’s biggest crowd not only sees the best match but also sees the Bargod coffers suitably swelled, two things I am certain Glan Evans would have loved to witness. 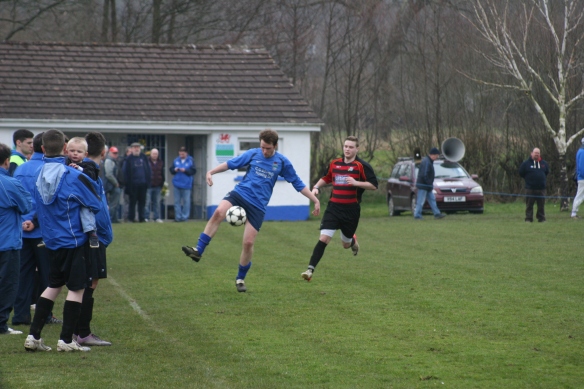 Knowing my football grounds as I do, I knew the indomitable organisers, Chris and Laurence had saved the best ground till last, and what an absolute corker Troedrhiw Park is. An ornate wrought iron gate is a tasty prelude to a 1978 wood and breeze block stand with gravity defying wooden plank seating. The clubhouse has several delights, a small stand tacked onto the end and a homely kitchen with football décor a plenty including a mug rack made from an old table football game. On the field the sides are evenly matched, longish grass making both elevens toil hard in unexpected heat. Andrew Jones gives the visitors a deserved lead before Alun Bowen levelled just before the hour mark. As the game appeared to be heading for a draw Ffostrasol’s lively sub Carywn Williams steered a delightful shot into the Dewi net and celebrated by rushing to the stand and sliding on his knees to mark what appeared to be the winning goal. Dewi had other ideas, however, and with virtually the last kick of a memorable weekend, Steffan Owens tapped into an unguarded net for a share of the spoils. 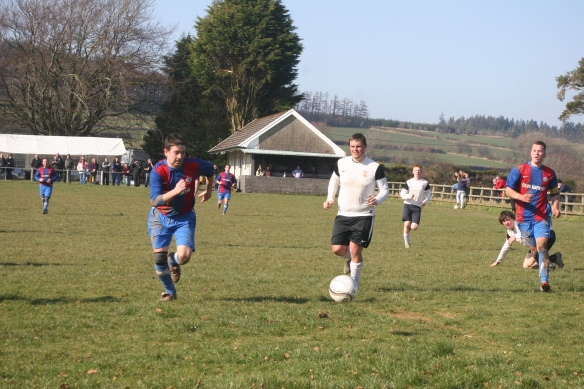 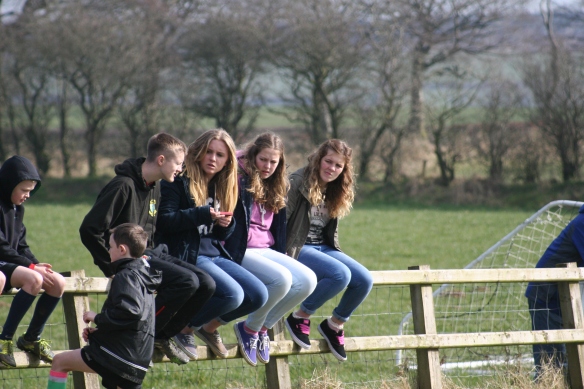 So that was it, scenic, friendly and good fun. What it is not is football for the purist, if tiki-taka, a false nine and the Christmas tree formation is for you then please enjoy Sky Sports. If you prefer good, honest endeavour, the regular thwack of leather upper on shin pad, village football as it was and always will be, then this is for you. Why don’t you give it a try?