Anderlecht appear to be the team that everyone else in Belgium appears to hate, success, of course, breeds jealousy and a record 33 Belgian titles and 5 European trophies play no small part in that.

A certain part of the East Midlands also dislike the Mauves with a passion. Back in 1984 then Anderlecht president, Constant Vanden Stock, after whom the stadium is named, admitted that he bribed Spanish referee Emilio Guruceta Muro with £18,000 to ensure they qualified for the UEFA Cup final at the expense of Nottingham Forest. Brian Clough’s men were 2-0 up from the first leg at the City Ground and looked odds on to reach another European final. Enzo Scifo put the Mauves in with a shout and then Muro awarded a highly dubious penalty against Kenny Swain. A third goal came with two minutes left. Muro intervened again in injury time ruling out a perfectly legitimate Ian Bowyer goal. Forest always suspected foul play and 13 years later Anderlecht admitted that Vanden Stock had used a local gangster to set up the deception. One of football’s great bribery scandals was met with just a years ban from European competitions for the Belgians.

Royal Sporting Club Anderlecht were formed in 1908 and were awarded the Belgian FA matricule of 35. Strangely their phenomenal success has all happened since World War II. Prior to then they lived very much in the shadow of Brussels’ neighbours Union Saint Gilloise and Daring Club.
Anderlecht play at the Constant Vanden Stock stadium which was often known as the Parc Astrid after the municipal park in which it was built. The public gardens were opened in 1911 and were know as Parc du Meir until 1935 when it was renamed Parc Astrid in memory of Astrid of Sweden, consort of King Leopald III, father of King Baudouin.

Anderlecht opened their stadium in 1917 and it was inaugurated as the Stade Émile Versé after an early benefactor. Originally they played on a field call Le Scheut. The original stadium was completely rebuilt and modernised between 1983 and 1991 at a cost of £1.5 million Belgian francs. The renovations left the stadium with a capacity of 21,500. The clubs boisterous support has seen rail seats put in at either end but the relatively modest modern capacity often results in sell outs. Plans are afoot to extend the stadium to 30,000 in the near future, a great way to bring up its centenary.

Tonight’s match is a televised game against newly promoted St Truiden, owned by Roland Duchâtelet a micro electronics mogul who owns a number of clubs including Charlton Athletic. The hosts aren’t exactly firing on all cylinders but take the lead when Dennis Praet’s cross is turned in by giant front man Stefano Okaka. The mauves never really look in trouble against a toothless St Truiden attack but they squander the chance to double their lead when experienced international Steven Dufour made a mess of a penalty. Perhaps justice as the tackle on Ezekiel looked perfectly fair. 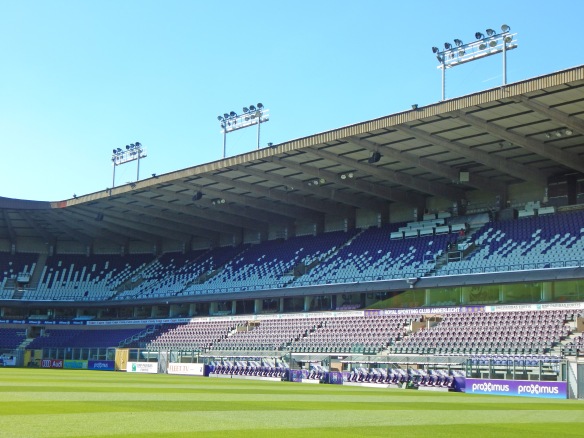 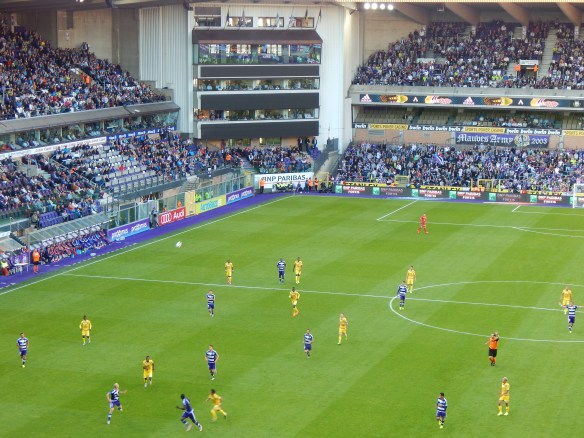 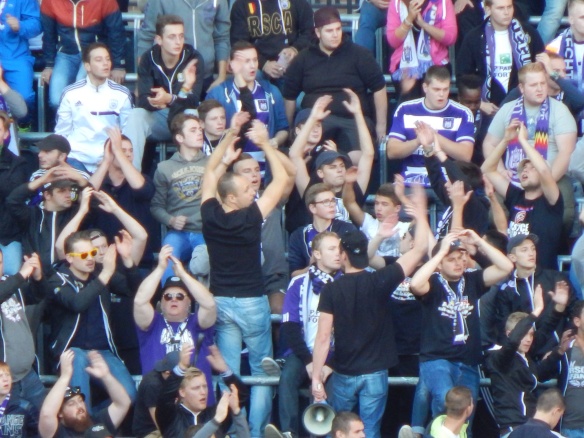