Lech Poznań were formed in 1922 as KS Lutnia Dębiec and underwent several name changes before settling on the name Lech Poznań in 1957. Lech is a common prefix for many institutions in Poland as a mark of respect to Lech to one of the three founding fathers of the West Slavic states. Lech was the founder of Lechia or modern day Poland. The other founding fathers were his brothers Czech, founder of Czechia which incorporated Bohemia, Silesia and Moravia and Rus who founded Ruthenia which comprised of Russia, Belarus and the Ukraine.

The Lech Poznań club were inextricably linked throughout their history to the Polskie Koleje Państwowe which was the state railway of Poland. Although formal ties ceased in 1994 the club’s traditional nickname of the Kolejorz, or the Railwayman, still remains. Lech have won the Polish championship six times and remain easily the best supported club in the Greater Poland province. The clubs litany of alumni include Miroslaw Okonksi , the star player of a side that won back to back titles in the 1980’s, Maciej Zurawski who found idolatry at Celtic Park and current international icon Robert Lewandowski.

The club have played at the Stadion Miejski (Municipal Stadium) since 1980, although work had begun on the site some twelve years previously. Since its rebuild for Euro 2012 the venue has been known as the INEA Arena. Prior to this the club played at three different grounds. For the first twelve years of their existence Lutnia played on a field owned by the Wicherkiewiczów family. The ground was called the Grzybowa, but really lacked decent facilities. A bigger ground was built in 1934, holding 20,000 the Dębiec Stadium (later renamed the Lech Stadium) became Lech’s spiritual home although between 1956 and 1980 they would play many of their bigger games at the July 22nd Stadium. The home of neighbours Warta Poznań, the July 22nd Stadium was so named after the day commemorating the Polish Communist Manifesto holiday. In 1981 the club’s new ground in Bulgarska Street was opened. The original stadium had three stands in a U shape and had traditional wooden benching. One end was left for a proposed swimming centre but the venue was never built and eventually the ground had a fourth side built. The record attendance of 45,000 was set April 1984 against Widzew Łódź and two years later the Miejski gained its iconic 56 metre tall floodlight pylons. Apart from the installation of plastic seating nothing was done to the ground until 2003 when a modernisation programme began. Then when it was decided that Poland, together with the Ukraine, would co-host Euro 2012, the municipality decided that plans needed to be revised to provide a much bigger facility than anticipated.

The firm of Modern Construction Systems was engaged in 2008 to provide a modern facility housing 45,000 spectators. The design is visually stunning from the outside with the roof having a membrane of silk on top for illumination and to allow sun onto the pitch. The north stand is noticeably smaller than the rest of the stadium and allows ventilation and light for the pitch surface. The stadium is architecturally more audacious than any in the UK and a home to which the Lech fans have taken to their hearts. However, there are few issues with the internal fittings, some parts of the grounds still have scaffolding boosters as the sightlines were not judged correctly and some of the connecting stairways between tiers are taped off as there are no handrails or safety features. The builders had no time and budget to reconfigure the errors before the deadlines for Euro 2012. The venue was opened in 2010 with a concert by Sting and went on to host three group games in Euro 2012 featuring Italy, Croatia and the Republic of Ireland.

The club usually have the highest average attendances in the Ekstraklasa and Lech’s fans are synonymous with choreographed bouncing and chanting. The now famous “Poznań” a turn of the back to the pitch and simultaneous bouncing originated as long ago as 1961. The south stand where the clubs Ultras now gather has one tier clad in white shirts and the other tier in blue. The organisation and impact is truly impressive.

Today Lech are entertaining another well supported club, Lechia Gdańsk whose fans are housed in a segregated section of the South stand. Lech field former Dundee United left back Barry Douglas in their starting eleven. The hosts sit third in the table while their guests are in mid table. The match goes to form with Lech dominating from the off and the soon rack up a comfortable two goal advantage. The visitors display some good approach play but seem to lack a cutting edge up front. The visiting fans, perhaps sensing imminent defeat disrupt the game some 15 minutes from the end with flares and smoke bombs. The visibility becomes so poor the referee calls a halt to proceedings for some five minutes while the smoke clears from the pitch. The home side remain well in control and even an injury time goal from Lechia is little more than scant consolation. The Lech fans were truly magnificent, relentlessly driven on by two drummers and a “capo”. Their support is loud and encouraging and not at all intimidating, in fact the number of woman and children at the game is really noticeable. Admission prices are also family friendly, around £11 for men and £7 for women, while the glossy English style programme was the equivalent of 60p.

A thoroughly recommended trip, go on get over there and bounce, you know you want to. 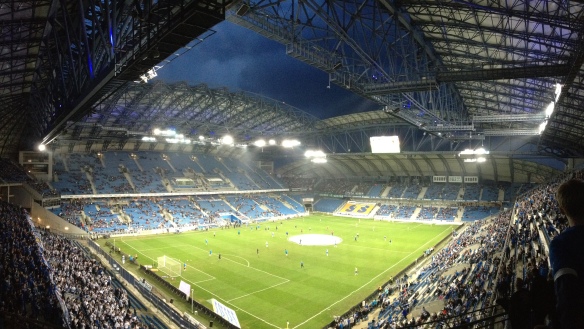 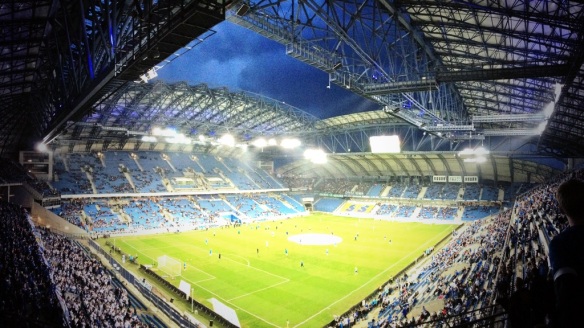 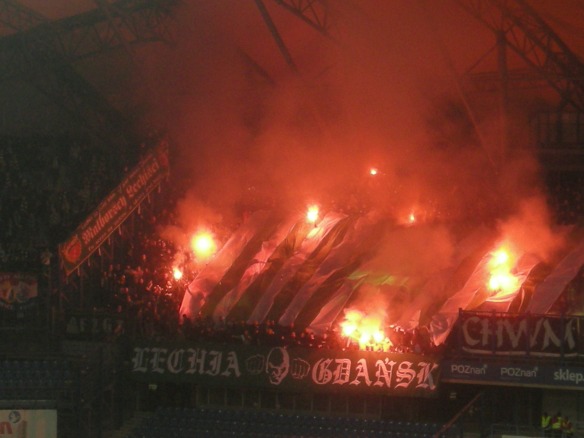