I joined the Welsh Alliance hop one game late after an unexpected Friday night visit to Cefn Druids. So Saturday morning began with a trip over the Menai Straits using the historic old Thomas Telford iron bridge. 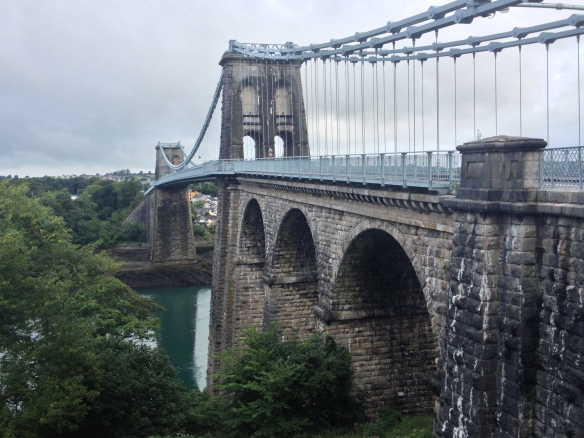 First port of call was to Llanfairpwllgwyngyllgogerychwyrndrobwllllanty-siliogogogoch and this involved the obligatory photo of the railway station with the longest name in the world. The local football side moved to their current ground of Maes Eilian in 2008, their Gor’s Field home still in use for the club’s reserve team. The current ground is decent with a seated stand and a covered terrace. More importantly the welcome is cordial and accommodating. The home side prove far too good for their troubled visitors Pwllheli. Despite a penalty saved by Kevin Davies, the visiting keeper, Llanfairpwll rattle in four quality goals without reply. 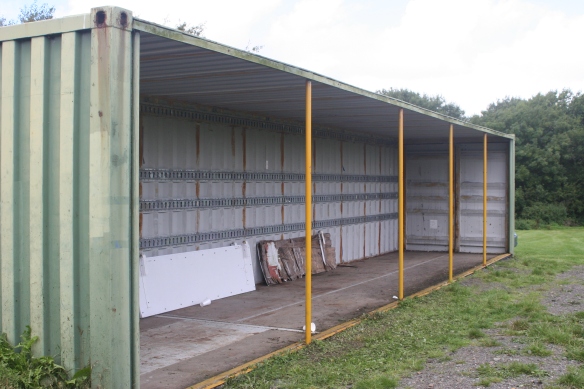 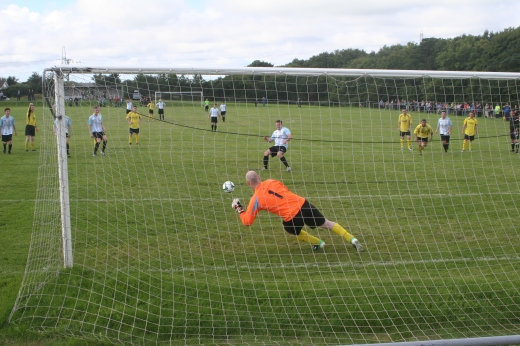 A quick drive to nearby Gaerwen for some Second Division action between the local side and Penrhyndeudraeth. Lon Groes is an immaculately kept ground liberally splashed with Gaerwen’s red and black colours. Before the match starts a short detour was required to the local school hall where the club was serving Lobscows, a traditional Welsh stew which garnered universal approval. The match saw the visitors dominate, and despite another missed penalty, it bothered the four sheep behind the goal more than the home custodian, Penrhyndeudraeth ran out easy winners by five goals to nil. 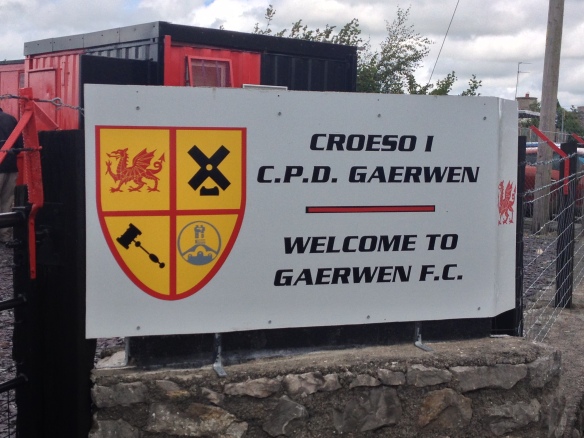 Another warm welcome awaited at Maes Meurig, home of Gwalchmai. A well develop ground with three stands and the strange sight of houses back gardens opening out into the ground itself. If the locals welcome to the crowd was first class it did not extend to their guests, Llanberis, who were put to the sword by five goals to one, Marc Evans catching the eye with a well taken hat-trick. 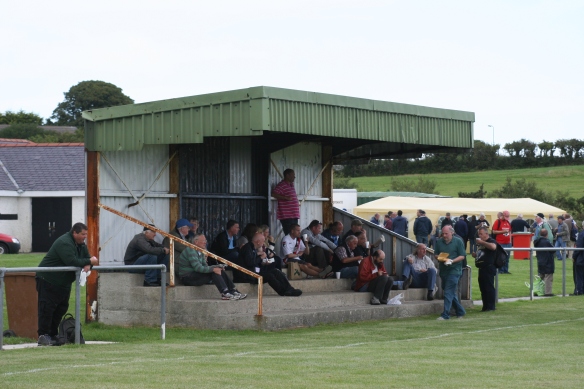 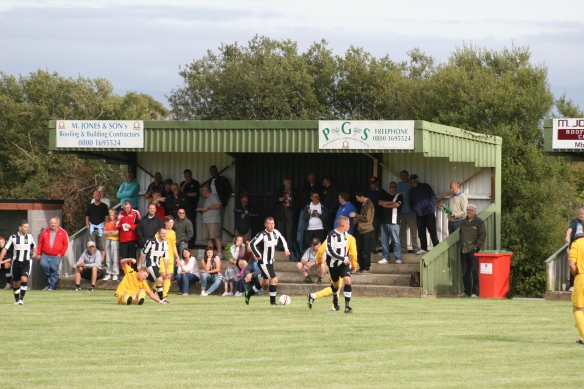 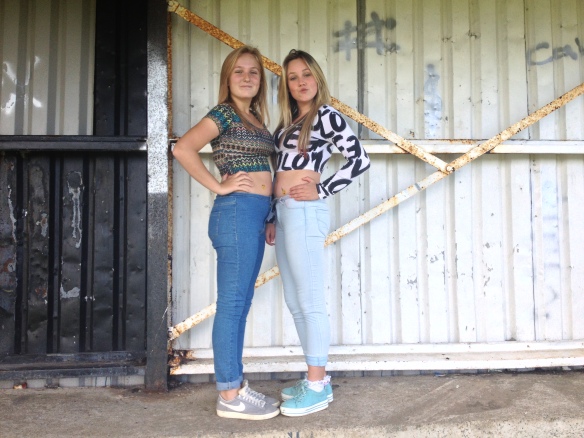 The final game on Anglesey came at the heavenly home of Glantraeth. The Trefdraeth ground is picturesque beyond compare with mountains soaring skyward, colours changing with the advancing evening. The club put on a super effort with food and drink and a tight encounter is enjoyed by all as the light gently faded.

The natural beauty of Anglesey gives way on Sunday morning to urban sprawl as Llandudno Junction ground the Flyover is hemmed in by housing and busy roads. That said the club seems to have a really good core of volunteers and they put on a great effort for their visitors. Sadly for the hosts the visitors, Holywell Town, are in no mood to roll over and dominate from start to finish, the Railwaymen doing well to keep the score down to five unanswered goals. 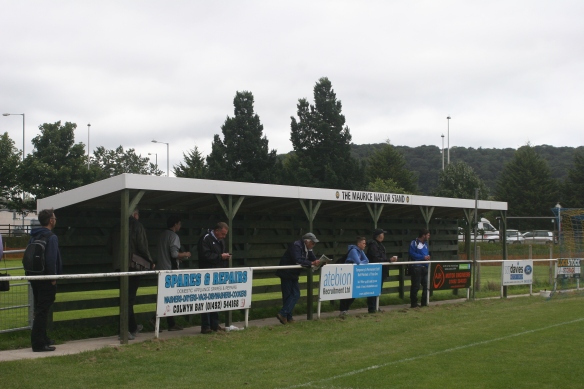 Just over a mile saw the convoy arrive at Cae Ffwt, the home of Glan Conwy, separated from the River Conwy by a single track railway. The first notable thing about Cae Ffwt is how small the pitch is, narrow and hemmed in, one corner flag so tight to the perimeter only short corners can be taken. The second notable thing is the vista, Conwy Castle looks glorious behind the green and white hooped dugouts and the bank and the road end provides stunning views of the river with the mountains of Snowdonia beyond. A tight, drawn affair is highlighted by the humourous interjections from the match announcer. 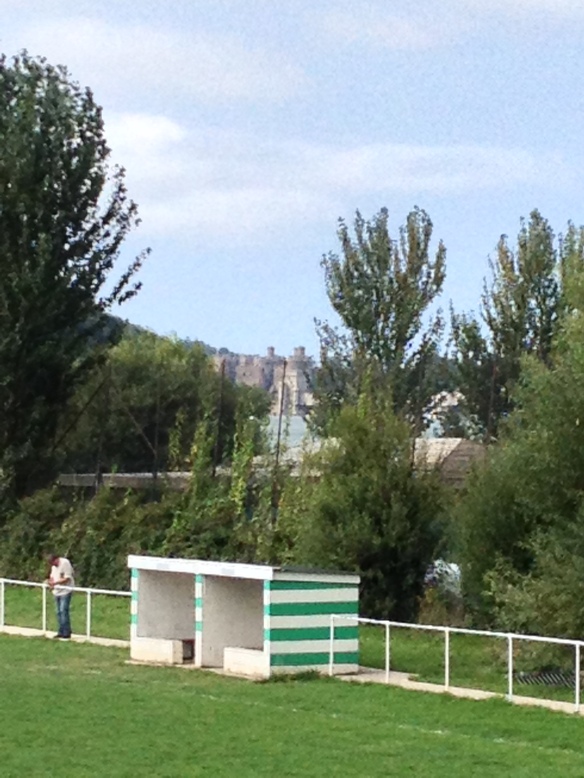 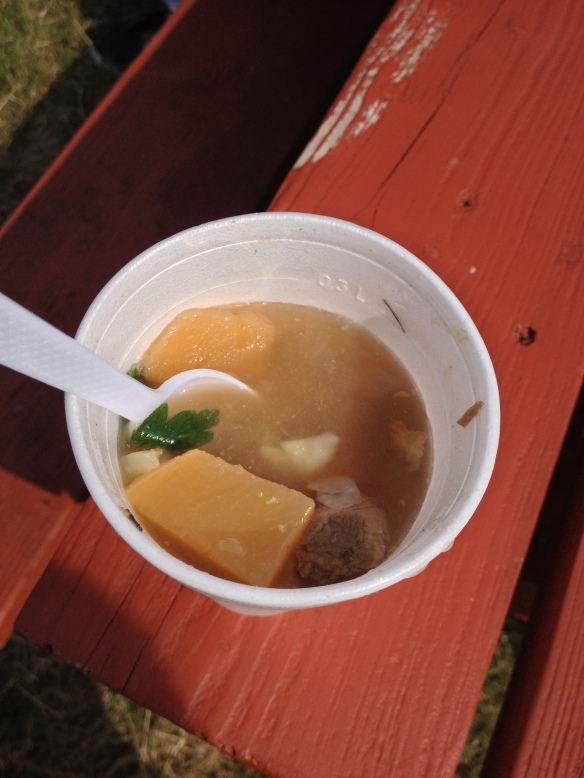 Saturday’s final match was at Llanrwst and followed a particularly edifying drive alongside the River Conwy. Into Llanrwst means crossing the river via a stunning medieval bridge which groans with the weight of unexpected traffic. 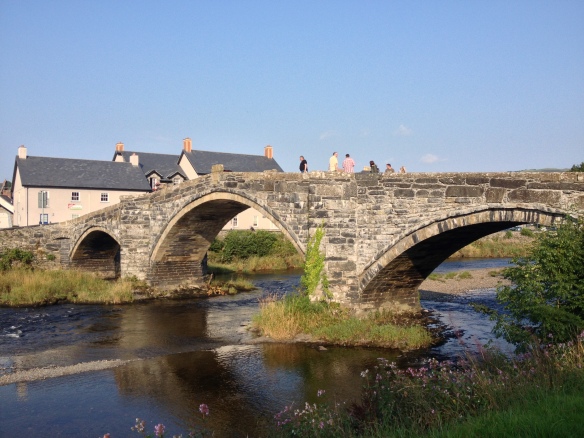 Gwydyr Park, the home of Llanrwst United (a 1983 merger of Llanrwst Athletic and Town), is a stunner. Heavily wooded hills loom over the stand giving scale and beauty to the backdrop. It is the stand rather than the game, a dour goalless slugfest that is the talking point of the evening. A local official tells anyone that will listen that it came to the village in the 1960’s having been transported from Accrington Stanley’s Peel Park. Whether it’s the whole stand or the clearly aged corrugated iron cladding that’s vintage Stanley is open to debate, but it’s the type of romantic myth I would like to believe has at least some semblance of truth to it. Research will be done. What is fact though is there is probably not many more finer places to spend a gloriously warm summers evening. 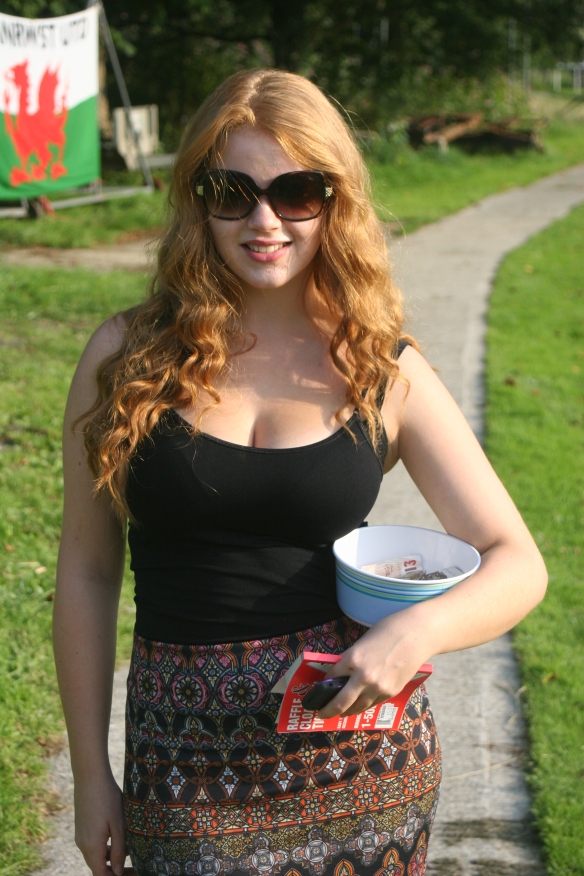 – If Carlsberg did raffle ticket sellers…

Sunday morning allows a quick visit to the ruins of Denbigh Castle before trundling down to Central Park, home of Denbigh Town. 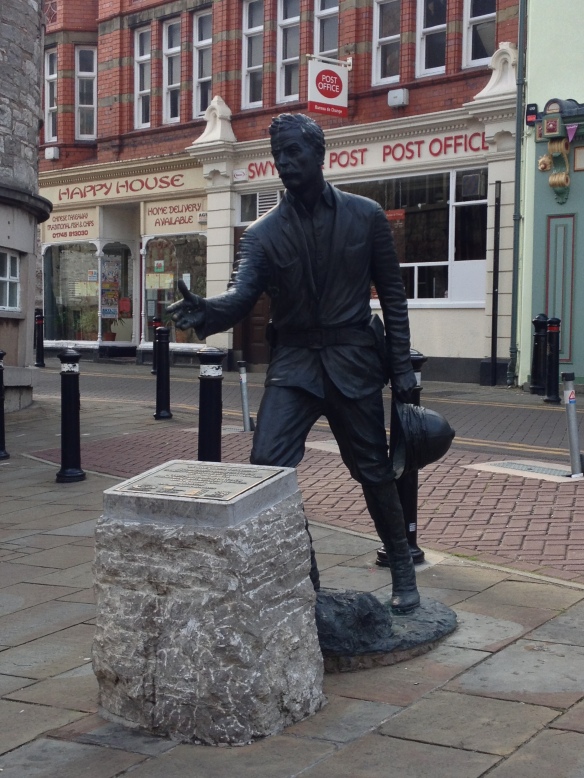 Another scenic ground with a church and a former metal asylum dominating the attractive stand. The club go the extra mile with welcome posters all around the ground. The visitors, Barmouth and Dyffryn United, arrive late and never get going. Mike Lundstrom opens the scoring for Denbigh and then the match becomes the Kristian Pierce show as the midfielder bags a very classy hat-trick. 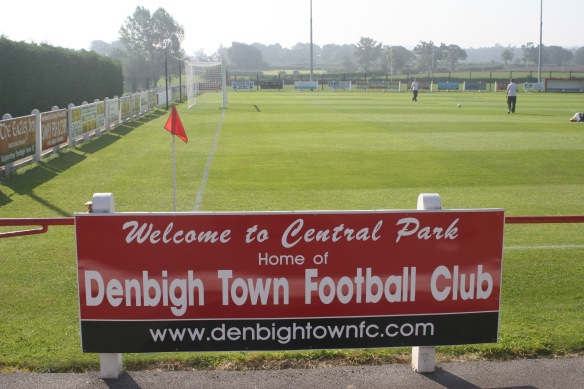 The next game is in the remote village of Llandyrnog, the place looks deserted as the convoy hits town. The pub, the Golden Lion, where the local side was first formed, opens quickly to accommodate its welcome but unexpected guests. The ground itself, Cae Nant, is quirky. The pitch is massively uneven, you cannot see one of the corner flags from the clubhouse such is the camber. The small stand is partially caged, the club seemingly having lost some of the padlock keys. The visitors are dear old Pwllheli again and to their immense credit they battle back from an early Josh Davies goal to take their first point of the new campaign when Mercall Williams bags a deserved equaliser. 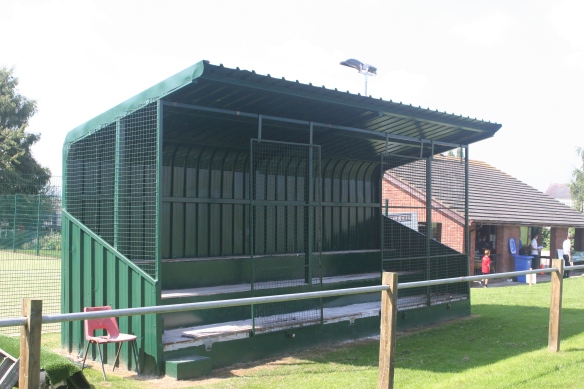 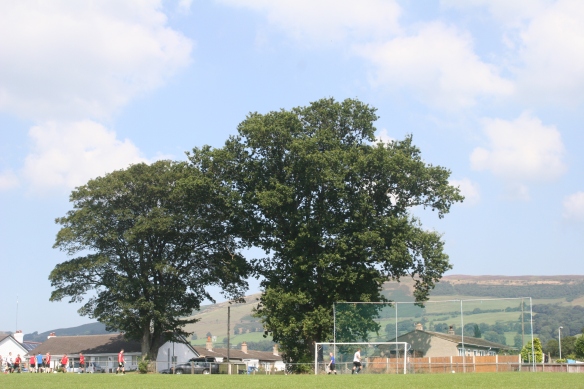 The hop ends at Meliden a suburb somewhere between Prestatyn and Rhuddlan. A basic ground with no stand and a small dressing room block could have been a disappointing end to the weekend. What makes it though is the effort of the locals, a family day is underway as we arrive and stalls line one side of the ground, and it’s a happy atmosphere to end the weekend. The historic and ancient Welsh Cup, currently the property of 2013 winners Prestatyn Town, makes a surprise but welcome addition to the occasion. A local derby with St.Asaph ends with Meliden taking the points with two hard earned goals. 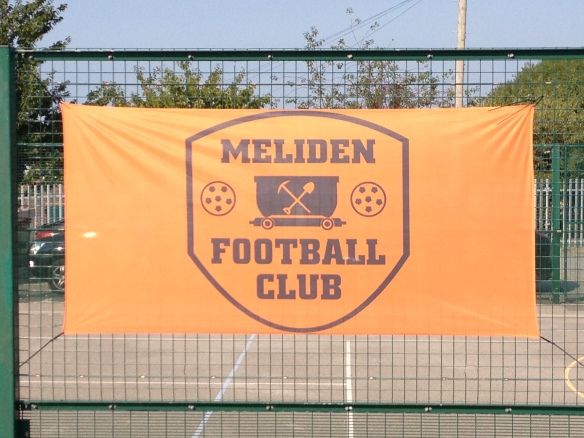 So once again a superb weekend faultlessly arranged by the experienced Groundhop UK team. Marvellous weather, welcoming clubs, scenic grounds, and a good standard of football, I think they might just have discovered the very elixir of life itself.